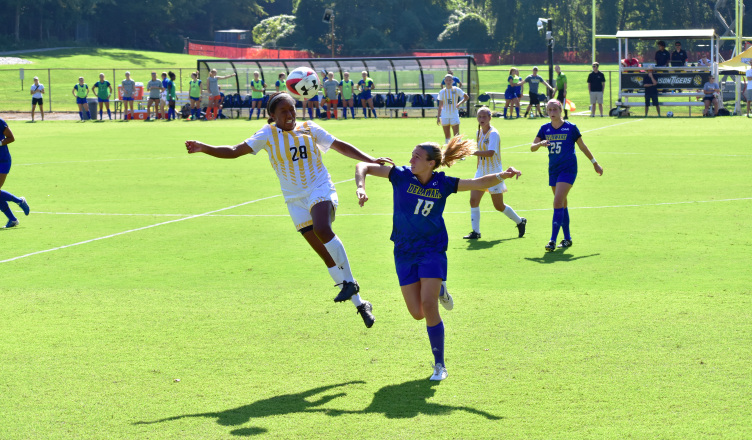 Towson’s chances at a Colonial Athletic Association (CAA) tournament berth continue to fade as the team dropped two matches over the week, falling to 1-4-0 in conference competition.

Sunday, Towson fell 2-1 in an overtime heartbreaker to College of Charleston on the road. The loss came just days after they were beaten 3-0 by Hofstra at home.

“It’s fatigue,” Head Coach Greg Paynter said about his team’s overtime struggles. “We absolutely battled once we got down a goal and we played great soccer, but we just came up short.”

Laura Ortega put Charleston in front after heading home a cross from Leah Deutsch in the 20th minute of the game.

The Tigers equalized before halftime when senior midfielder Maddie Bové ripped a shot into the back of the net on a feed from sophomore midfielder Justine Stoner.

Towson had opportunities for a go-ahead goal in the second half and overtime period, but couldn’t manage.

In the 95th minute, Alyssa Beck drilled the ball past Towson goalkeeper Taylor Sebolao off a pass from Mary Kate Bowers to give Charleston the victory.

“Our players gave everything today,” Paynter said. “Sometimes even when you do that, it’s not enough.”

Thursday afternoon, Towson fell 3-0 at home to Hofstra, a team that is currently 6-0 in conference play.

While the Tigers nearly managed to keep their opponent off the scoreboard in the first half, the Pride were dominant in the midfield and used their physicality and speed.

Hofstra’s pressure paid off when Maya Watkins scored off Madeline Anderson’s free kick from the other side of the field with just six seconds left in the first half.

In the second half, Hofstra capitalized on Towson’s poor passing for its second goal. Kristin Desmond netted a high near-side shot in the 65th minute following a Towson turnover to give Hofstra a 2-0 lead.

Bella Richards sealed the win for Hofstra in the 82nd minute with a curling effort from the edge of the area off an assist by Ashley Batista.

“We need to be ready [to] play with this same intensity that we did today,” Paynter said. “We played well enough to win today.”

Up next for Towson is a trip to Harrisonburg, Virginia, as the team takes on James Madison Thursday night at 7 p.m.