Award-winning photojournalist Patrick Smith never imagined he would be where he was Wednesday evening: Speaking as the keynote during the Mass Communication Department’s annual J-Day event.

“I knew photographers I wanted to be like, but I don’t think I could ever picture really being where I am,” he said during the March 4 event. “I was just picking up a camera and trying to do my best at portraying what was in front of me, and technically [his early photos] weren’t always the best.”

During the keynote, Smith, a 2009 Towson graduate and former Towerlight photo editor, warned students that those in the room with them will eventually become their coworkers and, with that, their competition. He said that finding the line between the two relies on having good judgment.

“I learned to lean on [peers] enough to get the information that I needed and know that after the day was over, I was going to go out and have a beer and hang out with them,” he said. “But at the same time they’re going to leave me in the dark because they’re trying to accomplish the same thing, if not better.”

He says that the best part of his job are the connections he makes and the relationships he forms with his subjects.

“It’s rewarding when someone opens their life to me,” he said. “Just to have them say, ‘Come over, sit down,’ and know that they’re OK with me taking pictures of their lives.”

According to Smith, journalists often get the unique opportunity to see people at both their greatest moments and worst days. He said that experiences like those foster the empathy necessary to be a successful journalist.

“You need to know what your subjects are feeling to portray that yourself,” Smith said. “Because if you can’t feel it in your words or your pictures, your readers aren’t going to feel it either.”

In addition to the keynote address, J-Day also included a panel discussion earlier in the day.

The panel, advertised as one for sports journalism, covered a wide range of topics including viewership, sourcing, investigative journalism and integrity.

The group also touched on the media’s ever-changing nature, urgency and the future of accurate reporting.

“In our race to be first we’re probably getting a lot wrong,” Sigmon said. “We’re at a crossroads where we have to determine whether it’s more important to be right or to be first.”

As for Smith’s future, he said he’s not planning on giving up his passions for photojournalism and visual storytelling anytime soon.

“I don’t think I’ve made the photo that’s going to be my favorite, yet,” he said. “I’m still chasing that and I think that’s why I’m so passionate about what I do. I’m still looking for that picture.”

Previous post The Big Picture: Caring for the homeless, others 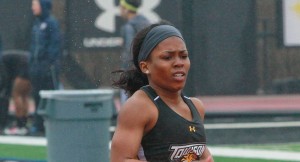 Next post Tigers struggle at ECACs
Editor in Chief