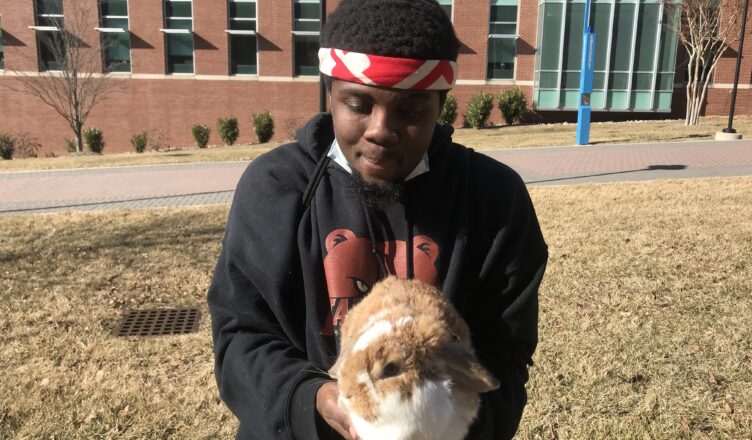 If you’ve walked around Towson University’s (TU) campus lately, you might have run into a man and his pet bunny out for a walk. Sam Booker and his bunny, Butterscotch, have been spotted all across campus.

From Columbia, Maryland, Booker is not a TU student but he started bringing Butterscotch for walks in new places, including TU.

Before the COVID-19 pandemic, Booker had no prior experience with owning a bunny.

“I couldn’t get hand sanitizer or toilet paper, so I figured ‘I’ll get a bunny,’” said Booker.

Butterscotch was only a few weeks old when Booker got him, so Butterscotch has been under the care of Booker for most of his life.

Booker said that Butterscotch has proven to be quite the companion, especially during the lockdown throughout most of 2020. Booker also has a cat, and he says the two get along well with each other. Butterscotch is partially free-range, meaning he is not confined to his cage at all times while indoors, one of Booker’s many efforts to ensure the bunny’s happiness.

Booker said he realized that he had the potential to extend to others the joy that Butterscotch provided him, so he decided to “spread the happiness” on TU’s campus.

Students passing by make remarks on Butterscotch’s cuteness and how “cool” he is. Butterscotch’s new friend Elizabeth Aaron, a freshman at TU, had seen the two quite consistently for around a month before realizing she could go up to them to get a chance to hold the bunny.

“It’s just so nice having a cute animal to hold, [with] the stress of school and everything,” Aaron said. She stated that she “definitely” looks forward to seeing them in the future.

In some cases, seeing a bunny on a leash has led to a bit of lighthearted confusion.

“I’ve seen weird things on campus, and like, people go running and walk their pets all the time, so it was a bit surprising to see a bunny because I didn’t know people walked bunnies,” said junior Kevin Akakpo.

The socialization attached to these walks has been beneficial to Butterscotch and Booker as well.

“Everyone’s a little different with how they approach us,” Booker said. “That’s probably the best part, it makes [Butterscotch] more social. It opened me up a little bit. I’m pretty quiet, so people just come up to me and start conversations, so that’s cool.”

Booker said that he’s been moved out of his shell by this experience. He said that making friends and getting to interact with other people has been a big aspect of taking Butterscotch out. Dozens of people pose with Butterscotch, highlighting the bunny’s popularity anywhere they go.

According to Booker, a multitude of students who greet Booker and Butterscotch mention having seen them on their friends’ Instagram stories.

Booker commented that he can tell when people who are walking by are unsure if they should go up to them. While their hesitation gave him a little laugh, he encouraged everyone to come and say hi.

You can find Booker and Butterscotch on Instagram @butterscotch__bun.