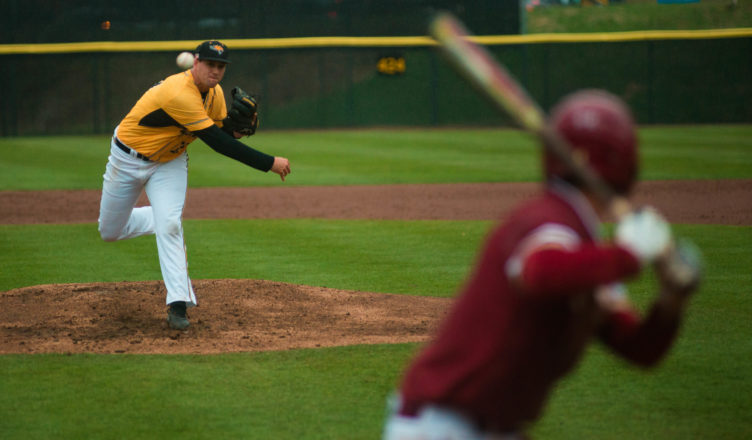 The Tigers traveled to face the No. 7 Miami Hurricanes for the first time since their 1988 NCAA Tournament match up. Despite the sweep by the Hurricanes (8-3), Towson (2-7) outhit Miami in the second game and were within two hits of Miami in the other two matches.

“[Playing Miami] lets us know what the best players in the country look like, so it gives us a visual of what regionals will look like,” interim head coach Miles Miller said. “It gives our guys an idea of where we need to get to.”

“The main theme of the weekend was bringing Tyner back to Miami and allowing him to reminisce on all of his baseball success he’s had down here and also be with our team,” Miller said.

The Tigers fell behind 3-0 in the final game of the series but rallied in the fifth inning. Sophomore catcher Trent Gast-Woodward stole home after a Miami error, and senior infielder Colin Conroy hit an RBI double. A base hit by sophomore outfielder Javon Fields drove Conroy home to tie the game at 3-3.

“[After] we responded with three [runs], the team started to believe a little bit more and we bought in and trusted ourselves,” Conroy said. “It was good for us, it was good for our mentality.”

This caught the attention of those in attendance, Towson does not play Miami often in any sport and this was a unique opportunity to showcase what the Tigers are capable of.

“We had a 3-3 game in the fifth inning and the people down here were certainly taking notice of our guys and how well we played,” Miller said.

The Hurricanes responded with a bases loaded walk, and two base hits resulting in three RBI. Miami added to their lead in the seventh on a fielder’s choice to secure their 9-3 win.

“We were in it for most of the game and we had a few bad breaks here and there, but ultimately, we kept battling through all nine and we battled hard,” Conroy said.

In game two of the series, the Hurricanes defeated Towson 8-2 after scoring seven runs in the first two innings.

Miami scored four runs in the first inning off an error, sacrifice fly and a home run. A three-run shot to right field the following inning increased the Canes lead to 7-0. The Tigers were retired in order for three of the first four innings, and only managed four hits through eight innings. Towson scored two runs in the ninth, and outhit Miami 8-6 in the game.

“This was probably the best pitching staff that we’ve faced so far and it was great that we could compete with one of the best programs,” Conroy said.

“Josh Seils was absolutely awesome on the mound. He was really great and kept us in the game and gave us a chance,” Miller said.

Both teams remained scoreless during the first four innings. The Hurricanes scored two runs in the bottom of the fifth. The inning concluded with a strikeout by Seils.

In the top of the ninth inning, after being hit by a pitch, Powers advanced to second on a passed ball. With two outs, an RBI double by freshman catcher Burke Camper sent Powers home and was inches away from a home run.

“We came about a foot away from Burke Camper tying the game in the ninth inning and I think a lot of the guys thought it was out off the bat, but it was just a really exciting moment for us,” Miller said.

Towson returns to Schuerholz Park to play their first home game against UMBC on Tuesday, March 3 at 2 p.m.

“It was good to realize that we could compete with a top tier program and that should definitely give us a lot more momentum,” Conroy said. “We’ve got a lot of trust and confidence headed into next week.”