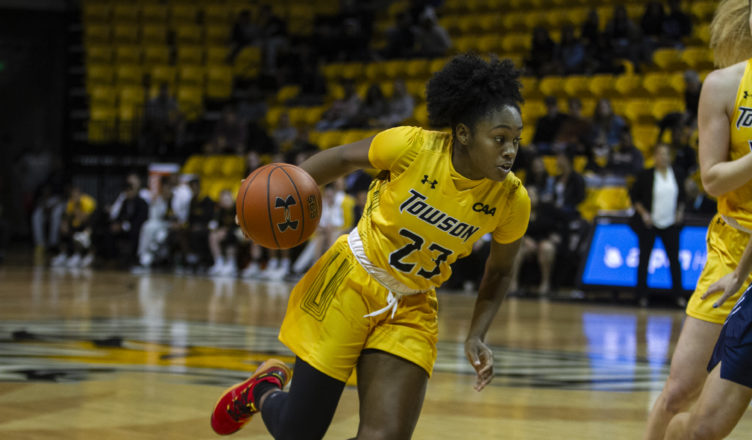 Towson won 59-56 in dramatic fashion over Marshall University after senior forward Nukiya Mayo lifted the Tigers with a late triple.

“We knew they would come back for us this year,” head coach Diane Richardson said. “We won at their place last year, I don’t think they took that lightly and so they were prepared for us this year. They kind of had a chip on their shoulder like, we got to get them back, and we knew that they would be coming for us.”

Similar to last season’s win over the Herd, Towson fought back from a double-digit performance. The main difference comes in the fact that the Tigers shot poorly, hitting 27% from the field and 30% from three-point distance. Marshall shot poorly as well, especially from the free-throw line where they made four out of 15 free throws.

“We knew that we were a little rusty,” Richardson said. “We had to keep our head in it, I knew that we could turn the game around with pressure defense. They (Towson) got out, pressured them, did not let them see (clearly). I think that was the turning point of the game.”

Marshall threw the first punch of the afternoon, building a nine-point lead in the first quarter with physical play resulting in 18 points in the paint.

“We just rallied back as a team,” Richardson said.“[We] didn’t put our heads down and we fought, we fought all the way through.”

Towson responded and took the lead with under a minute left in the first half with a Jeter three point shot. But the Herd responded with a pair of free-throws to take a 33-32 lead into halftime.

The final frame featured four lead changes between the two teams. It included a five minute scoring drought before Jeter nailed another triple to give the Tigers a 54-52 lead.

Marshall tied the game at 56-56 on a layup with 26 seconds left to set the scene for Towson. Murray patiently bided her time until about six seconds were left on the game clock. She veered to the right as Mayo slipped a screen, threw a pass to Mayo on the left-wing, who subsequently rose up and hit the game-winning triple with less than two seconds remaining.

The Tigers won their second consecutive contest against the Herd since last season. Last year’s victory against the Herd proved to be a spark plug for Richardson and the culture she wanted to build.

“This was a turning point for us last year as well,” Richardson said. “We’re starting to understand how we play, how each other plays and getting each other up. They can self-talk and talk to each other to get us up.”

Towson enters conference play with four home games to start the new year. Their next game is against Elon on Friday, Jan. 3 at SECU Arena. Tipoff is scheduled for 7 p.m.