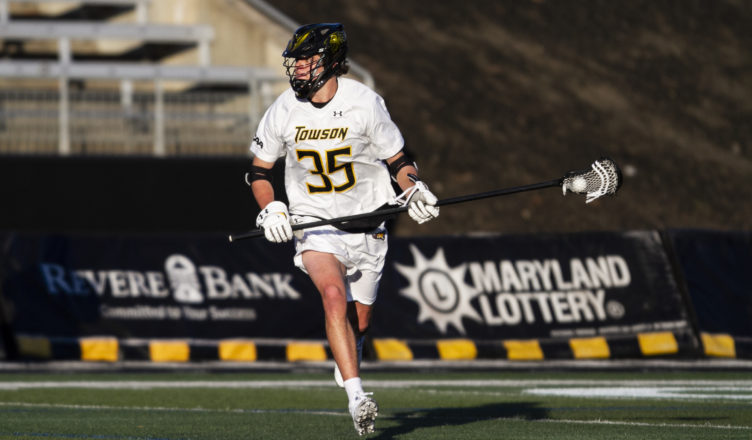 The Tigers’ slow start to the season continued against Loyola. Towson (0-4) fell to the No. 12/11 Greyhounds (3-1) 15-6 as the Tigers surrendered nine unanswered goals in the second half.

Sophomore attack James Avanzato and senior attack Brody McLean each scored two goals for Towson. One of the few positives was the play of redshirt junior goalie Shane Brennan. He tied his career high with 16 saves.

“Thankfully he had 16 saves,” head coach Shawn Nadelen said to Towson Sports Network (TSN). “They had the ball a lot and he was able to shut the door. He looks like he’s feeling more comfortable in there. He did his part. We gotta support him better.”

The Tigers fell behind 3-1 in the first quarter but kept the second quarter competitive. Each team scored two goals in the quarter as Loyola led 5-3 at halftime. Towson continued to struggle winning faceoffs, only winning three of the ten in half one. The Tigers went a combined 9-25 in the game, freshman midfielder Shane Santora went 3-13.

In the second half, McLean’s second goal of the game cut the Greyhounds lead to 5-4. This would be the closest Towson would get as Loyola went on a 9-0 run that lasted over 22 minutes of game time.

“We just kinda unraveled unfortunately,” Nadelen said to TSN. “Too many mistakes clearing the ball, some rushed possessions offensively throughout the game. I didn’t think we shot the ball great, definitely not as much as we game-planned for.”

Three consecutive goals were on man up plays as the Greyhounds extended the lead to 15-5. Avanzato scored his second goal with 34 seconds left, but Loyola showed why they are ranked in the top 15.

“We have to be much more effective in our clear,” Nadalen said to TSN. “We had some new bodies out there, seeing some action for the first time. That might have a little to do with it so we gotta make sure those guys are settled and understand where they need to be.”

The Tigers committed 11 turnovers in the second half, finishing with 19 in the game. The Greyhounds more than doubled Towson’s shots with 51, and nearly doubled the Tigers shots on goal 31-16.

“We had way too many careless turnovers,” Nadalen said to TSN. “It allowed them (Loyola) more possession time and easy opportunities to score goals. They take full advantage of that and that’s 100% on us.”

This is the first time in program history Towson has started a season 0-4, dating back to 1959.

Towson will travel to Catonsville to face UMBC on Tuesday, March 3 at 6 p.m.