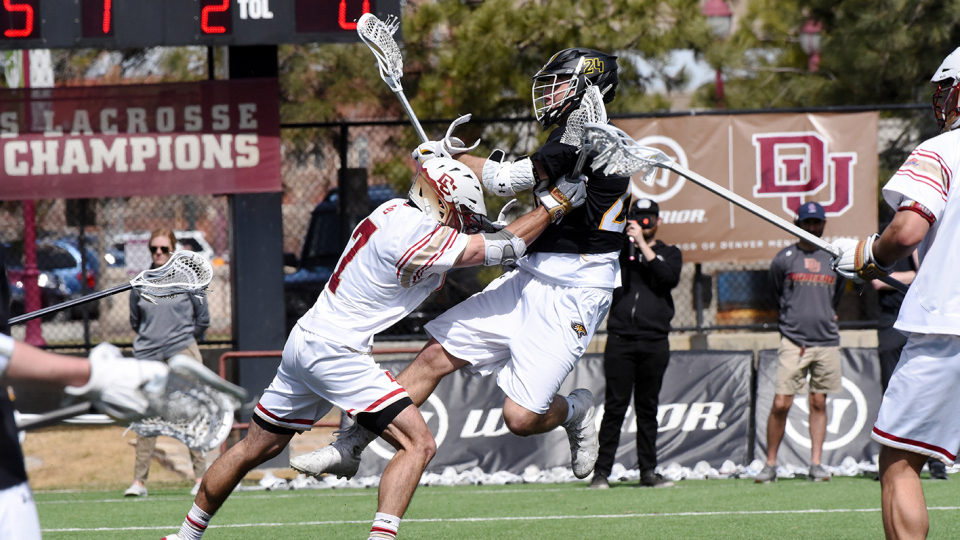 The Tigers (3-5) had strong contributions from the bench, but it was not enough to take down the Pioneers (6-2).

Neither team could get its offense going in the first quarter as redshirt freshman goalkeeper Shane Brennan continued his strong play this season with two saves in the period.

Towson got on the scoreboard first when sophomore midfielder Jake McLean scored off a pass from junior midfielder Jon Mazza five minutes into the second quarter.

Redshirt junior Dylan Kinnear put in an unassisted goal a few minutes later to put the road team up 2-0 midway through the second, but Denver responded with a goal just before halftime.

McLean and Kinnear each recorded another goal apiece before the end of the period, putting the Tigers up 4-1 heading into the break. Despite relatively quiet seasons so far from the two, they accounted for all of the visitors goals in the first half.

“They capitalized on their opportunities,” Head Coach Shawn Nadelen said. “We want to be as efficient as possible and those guys coming in provide valuable possession and minutes.”

Towson came out firing in the third quarter, scoring just under three minutes into the stanza, but sophomore attacker Ethan Walker answered the call for the Pioneers with back-to-back goals midway through the period.

Junior midfielder Grant Maloof registered his ninth goal of the season near the end of the quarter, but Denver closed out the period strong with two consecutive goals to make it a 6-5 contest.

The home team kicked off the final quarter of play with an explosive scoring burst, recording four goals within the span of two minutes early in the period.

Senior midfielder Connor Donahue scored the first goal, then senior faceoff specialist Trevor Baptiste ripped in the next two and Walker finished off the run with an unassisted score to catapult Denver to a 9-6 advantage.

The Tigers answered back with two goals to cut the deficit to one, but Walker nailed a goal to put his team up multiple scores again.

The Pioneers tried to seal the win with another goal, but Brennan recorded a crucial save to keep Towson in the game. The road team scored quickly off of Brennan’s save and got the ball back with under one minute left to play, needing one score to tie.

“We weathered the storm and made a comeback of our own so I was really impressed with our guys,” Nadelen said.

Redshirt sophomore midfielder Matt Sovero found the back of the cage with just under 30 seconds left to go, sending the game into overtime. That goal only marked his third goal of the season, but it came at a timely moment for the Tigers.

“He’s got very good speed [and] a pretty hard shot,” Nadelen said. “He can get separation from a defender and the more he plays the more he can get experience. Hopefully that allows him to be a little more comfortable and confident on the field.”

Despite Sovero’s heroics, Towson could not secure the win as junior attacker Colin Rutan ripped a shot in the top right of the cage with 1:46 left to give Denver the overtime victory.

Denver’s comeback win was aided by the home team’s ability to win possessions. They registered a staggering 21 faceoff wins while the visitors could only muster three. This allowed the Pioneers to let loose on offense as they compiled eight more shots on goal than the Tigers.

“The faceoff game really hurt us throughout that whole game,” Nadelen said. “[And] not just by losing faceoffs, it was the violations in the fourth quarter. Against a very dangerous offense and then man-up, it is a hard thing to try to counter.”

The Tigers look to rebound from this difficult loss when the team travels to James M. Shuart Stadium to take on Hofstra Saturday afternoon. Game time is set for 1 p.m.