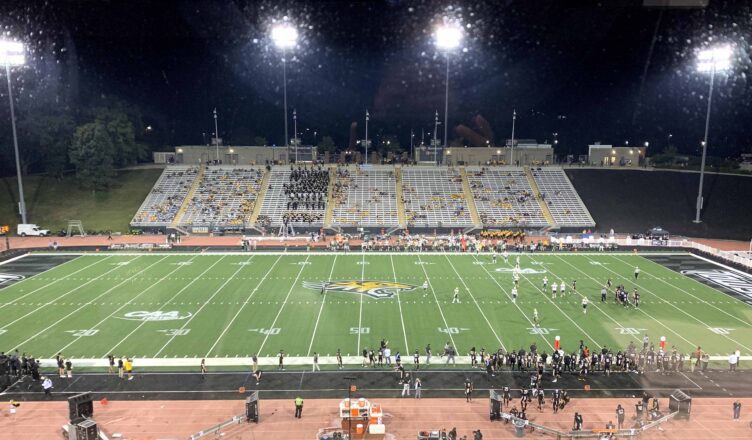 With 9,109 fans in attendance, it was the 12th highest attended game at Unitas and the second-highest since 2015.

“Congratulations to North Dakota State, very, very, good football team,” Tigers head coach Rob Ambrose said. “There’s no way for us to simulate their physicality with our roster currently. I told the guys the national championship goes through this team whether you play them in Fargo,  you play them here, or you play them anywhere in the playoffs. It’s an animal you can’t truly understand until you face it.”

On their fourth play from scrimmage, the Bison took the lead when junior quarterback Quincy Patterson found senior wide receiver Christian Watson over the middle for a 67-yard touchdown. NDSU went for a two-point conversion but the Tigers got the stop.

The Bison emphasized the ground game on their second drive, as they only attempted two passes and finished off an 82-yard drive with a touchdown. The drive took 6:45 of game time off the clock. On the ensuing kickoff, Kobe Young returned it 87 yards to NDSU’s 12-yard line. Towson went for it on fourth and goal and was stopped.

“When opportunities present themselves we have to take advantage of them,” graduate quarterback Chris Ferguson said. “I think that was the name of the game.”

Sophomore running back Dominic Gonnella picked up 43 yards to start the Bison’s third drive and junior running back Kobe Johnson caught a 31-yard pass to set up a quarterback keeper by Patterson for a touchdown. A mishandled snap on the PAT kept the score 19-0.

The big plays kept coming for the Bison, when Patterson connected with junior fullback Hunter Luepke for 44 yards, however, redshirt senior safety S.J. Brown intercepted a pass in the end zone. The Tigers were backed up inside their own five and NDSU forced a safety to extend their lead.

“We didn’t make enough plays in the start, we just gotta be better as a total offense,” Ferguson said. “Got to help our defense out early.”

Watson returned the free kick after a TU safety to the Towson 36 yard line. Patterson was sacked by fifth year senior defensive lineman Marcus Bowman for a nine-yard loss. The Bison missed a 49-yard field goal in the final seconds of the half but still took a 21-0 lead into halftime. The Tigers were held to 50 total yards in the first half.

“For us to win this ballgame we were going to have to run the ball, we’d have to keep them off the field as much as we could,” Ambrose said. “Our strength of the offense, our age and wisdom, experience of the offense is the offensive line and we couldn’t get that done.”

In the second half, a 35-yard run by Bison junior running back TaMerik Williams set himself up for a touchdown on the next play.

Williams started the fourth quarter with two runs combining for 38 yards. It set up a touchdown run by sophomore running back Jalen Bussey. At the 11:35 mark in the quarter, the Bison had 310 rushing yards while Towson had 150 total yards.

“For us to even have a chance to win we have to be more efficient with the ball,” Ambrose said. “That means if you don’t get it on third, find a way to get it on fourth down and sometimes we did, not enough.”

Late in the quarter, Ferguson connected with graduate wide receiver Caleb Smith for 39 yards that set up a first and goal. Graduate running back Jerry Howard prevented the shutout with a one-yard touchdown. It was his first touchdown as a Tiger.

The Tigers return home Saturday, October 9 for their CAA home opener against Stony Brook University. Kickoff from Unitas Stadium is scheduled for 4 p.m.