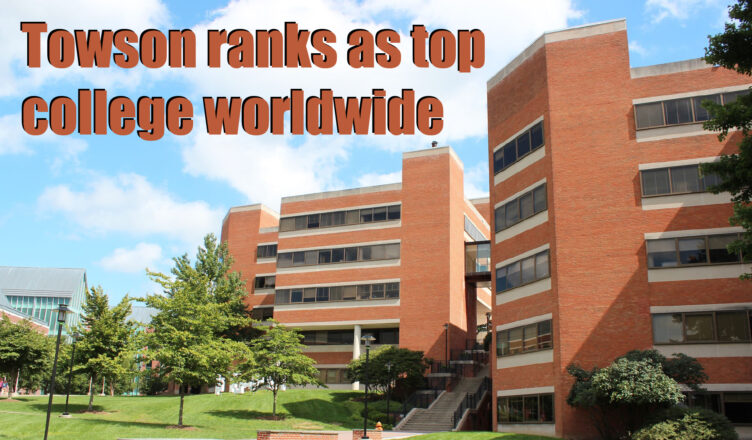 Towson University was ranked among the top 9% of universities worldwide by the Center for World University Rankings.

Compared to 20,000 other universities, Towson proved to have quality of education, alumni employment and research output to be ranked in the top 90th percentile of colleges worldwide.

According to senior Mohammed Diallo Towson’s strength’s include a commitment to excellence.

“Their rigorous programs they offer to worldwide students, commitment to excellence & track record of student success,” Diallo said. “They open their doors to whomever seeks higher education no matter what the student’s origin is. Also, they allow us students to have opportunities in the professional world.”

Towson University has also been placed in the “Best Northeastern” college list for 2021, created by The Princeton Review.

‘“That the Princeton Review recognition reflects that students value the benefits of our inclusive campus culture and world-class faculty is particularly meaningful,”’ said President Kim Schatzel.

Towson shares a place on the Princeton Review list with 224 other colleges and universities including American University, Georgetown University and Johns Hopkins University.

“Being a Towson student means that I am receiving a high-quality education from professors with clinical experience to prepare me for the healthcare field,” said student Marie Berman.

Towson’s change of Carnegie Classification allowed it to be ranked nationally against other colleges. This change in classification resulted in Towson’s social mobility, the movement within or between social strata in a society, to be evaluated as equal to Harvard’s.

“Towson has a strong sense of community; making sure that no one is left behind. Professors and Peers weigh the success of others greater than their own interests,”said student  Joseph Codd. “Towson’s location is key to the success of the students as there is limitless opportunity in the surrounding Baltimore, D.C. and Philadelphia areas.”

Though Towson is ranked par with Harvard, its education does not come at the same cost. Money magazine ranked Towson University 107th on its 2019 Best Colleges for You Money list.

“Towson’s classroom environment is student centric,” Codd said. “Professors often find that the students demonstrate such a knowledge of the material; that time in class is often spent talking about the professors’ prior experience with that subject material rather than mulling over content.”

In addition to Towson University’s prestigious rankings on lists and curated categories, Towson has been able to uphold resources for students despite the virtual classrooms.

“There are numerous resources available to help students be successful including the writing center, peer mentoring, and various tools on the Cook Library website,” Berman said.

Berman said that the school has provided them a sense of community both in person and online.

“Towson provides a supportive community to help all students have a positive learning experience,” Berman said.