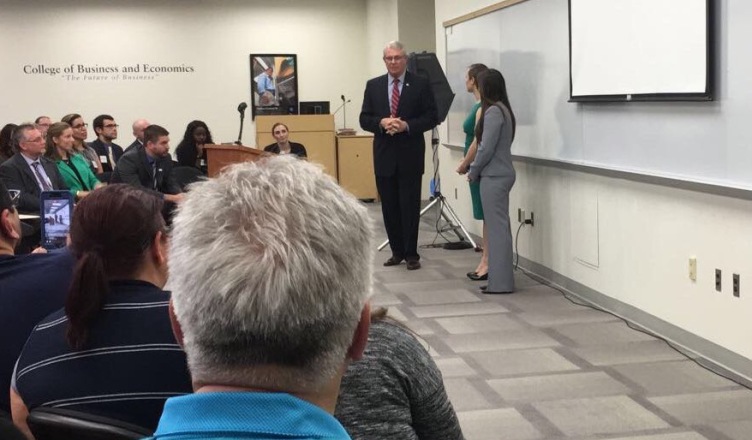 Typically, the winner of business competition The Associate, modeled after reality TV’s “The Apprentice,” receives a post-graduation job with the semester’s sponsoring company. This time around, though, two of the eight participating graduates-to-be are walking away with offer letters in their future.

State Employees Credit Union, or SECU, Chief Operating Officer Rod Staatz decided to hire both Jully Antunes, of Team Outsource, and Lillian Hulbert, of Team Protégé, after they each presented their case studies for the competition’s final round.

“I’ve realized throughout this competition that I’m more creative, and I can do more critical thinking,” Antunes said.

The finale saw eliminated competitors return to celebrate the end of the seven-week competition process, which began with candidate introductions in early February.  Many of the returning competitors spoke to the benefits of The Associate in forming business connections and building skill sets.

“In every aspect of this competition we learned more than we could’ve in a classroom,” Team Outsource competitor Marcele Viana said.

Samantha Jonjo, a competitor with Team Protégé, described networking with professional advisors and the members of both teams throughout the competition.

“I can call anyone for anything,” Jonjo said.

An entrepreneur herself, Towson University President Kim Schatzel described the competition as “priceless.”

“It’s a great chance for students and faculty to work together to develop ideas,” Schatzel said.

The Associate is a signature business competition sponsored by the College of Business and Economics that provides an opportunity for graduating seniors to showcase their business acumen while competing for a job offer. The 14th year of The Associate will begin in February 2018.