UPDATE: Three justice vacancies have been filled in a second SGA election that ended May 11. The three new justices, in order of votes received, are Chiedozie Obi, Afuh Adeck and Ifeanyi Ozobu. Hussein Alabi and Kaleel Day ran, but did not receive enough votes.

The student body of Towson University elected James Mileo to be the next Student Government Association president with 1,572 votes. Pat Mascio, his opponent, received 1,361 votes. A total of 3,014 students voted.

An excited URTU ticket broke into tears following the announcement. The Legacy ticket left shortly after.

“I really don’t know what to feel,” Mileo said in an interview. “We literally worked so hard for this, staying up until 3 a.m., not getting any sleep and getting right back up at 6 [a.m.]. I can’t believe this happened.”

For Johnson, this win proves that she “earned and was qualified” for the position.

“I just think that this just shows you that all of us that are on the margins are so strong and I’m nothing without my community,” Johnson said.

“It was really close, a  really hard fought election on both sides,” Chris Rindosh, coordinator for student organizations said.  “And I think in a lot of ways a very tense election. This was, honestly, a very very close election.”

URTU spent about $375 more on the election that the Legacy ticket did — including about $100 on a Snapchat filter, according to internal SGA expense reports.

The campaigns were marred by several racially-charged incidents, the most recent being a year-old tweet that surfaced May 3 in which Mascio used wording that some users called racially insensitive.

In a series of tweets the same night, Mascio apologized for the tweet . He did not respond to The Towerlight’s request for comment. 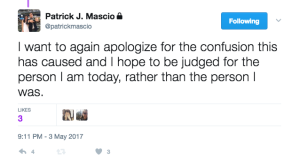 URTU released a statement the same night, writing that there was no connection between their campaign and the release of Mascio’s tweet. Mileo declined further comment, saying he was too focused on campaigning.

Starting on April 28, several Facebook posts called Johnson a racist after a video from the fall 2016 “anti-Trump” walkout surfaced and was taken out of context.

The 18 winning senate candidates, in order of number of votes obtained, are:

Hussein Alabi, Afuh Adeck and Joseph Mitchell ran for senate, but only 18 senators are voted in during the election.

Katerine Delgado and Lauryn Hightower both won their candidacies for justice. There are three justice seats still open; a second election will be held to fill those positions.

Packets for the justice election can be picked up from the SGA  office starting tomorrow and are due Tuesday at 4 p.m.