It’s finally here. The NHL regular season is upon us, and for a Redskins fan like myself, this could not have come soon enough. This is truly the best time of the year. Every fan base is full of hope, players are healthy and ready to get going and excitement is felt all around.

Every season is full of surprises, who will be a surprise contender? Which player will dominate this season? Is Tom Wilson the best player to ever set foot on ice?

The Washington Capitals are set to have a fun and competitive 2019-20 season. A lot of familiar faces, and some new ones as well, are gearing up to take the ice. So what does this season have in store for the Caps? Here are some of my bold predictions for the 2019-20 Capitals season.

Left winger Jakub Vrana has now had two full seasons with the Caps and has progressed in each of those seasons. He has scored 13 goals in 73 games 2 years ago, and following it up with 24 goals last season — not to mention playing a pivotal role in the 2018 Stanley Cup run. Washingtonobviously believes in Vrana, giving him a two-year contract extension over the summer. This is the year he takes another big leap, this season he becomes a star. Vrana will score 30 goals this season. The Czech forward has elite speed and his ability to control the puck at full speed keeps getting better. Towards the end of last season and even a little bit in the preseason, he has shown to have increased velocity on both his slap shot and wrist shot. Mix that with the fact that he will either be playing on the same line as center Evgeny Kuznetsov or center Nick Backstrom, who are both elite when it comes to puck distribution, 30 goals are easily attainable for Vrana. Some may even say it is necessary that Vrana be more productive in order for the Caps to stay competitive.

Kuznetsov returns to the All-Star game

Kuznetsov is having a peculiar start to the new season. He will have to serve a three-game suspension to start the season, due to testing positive for cocaine over the summer. There was also a controversial video that came out months ago that shows the Russian forward in the presence of cocaine. Kuznetsov originally denied that he consumed the drug, but later backtracked and apologized for his actions.

Kuznetsov is a great player and I believe he will be able to put this controversy in the rearview mirror fairly quickly. Nothing makes people forget about your flaws like success, which is exactly what Kuzy will do. Kuznetsov had a good but somewhat disappointing 2018-19 campaign, especially after having such an electric 2018 playoff performance. Kuznetsov had 51 assists last year, which is good. This season, Kuznetsov will contend for the league leader in helpers with about 70. Also, look for Kuznetsov to be more of a menace in scoring as well. He has shown over the past few seasons he has the ability to be a sneaky sniper. His superb talent to pass makes defenders weary and has them overplay other forwards, this gives Kuzy a lot of open looks at the goal. Unlike past years, Kuznetsov will get off to a hot start. His production in the first half of the season will be good enough to earn him his second all-star game appearance. I believe he, along with the rest of the Caps team, will have a little extra fire in their play this season.

The Capitals have one of the deepest and most talented rosters in the league. Last year, there were definitely signs of fatigue as the season went on and into the playoffs. It definitely became visible in the double-overtime elimination loss to the Carolina Hurricanes. This year is different, they’ve had plenty of time to rest and they’re determined to prove they weren’t a one year fluke. Left winger and captain Alex Ovechkin isn’t getting any younger, his window of opportunity is closing; this Washington team has a great chance of helping him add to his legacy. 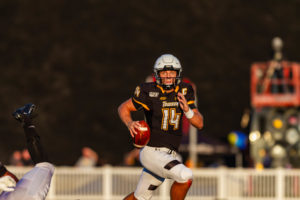