The Tigers suffered their first loss in conference play this season against a strong James Madison side on a cold and rainy Friday evening.

Towson outplayed the Dukes for most of the first half applying pressure along with owning the majority of possession. The Tigers put four of their six shots on target but were unable to beat JMU senior shot stopper Ellen Forrest with any of their efforts.

The second half was an entirely different story as JMU created more and more chances. 53 minutes into the game, Dukes leading goal scorer Ashley Herndon broke the deadlock firing home a shot past Towson junior keeper Taylor Sebalao after receiving a cross from Sydney Braun-McLeod.

JMU was then able to double their lead after senior midfielder sent Allie Brunner through the Towson defense before ripping a shot into the back of the net.

The Tigers were able to pull one goal back as Natalia Pinkney scored her fifth goal of the season after weaving past several Duke defenders before shooting past Forrest. It was too little too late for Towson as the game would finish as a 2-1 defeat for the Tigers.

The game was decided on the finishing of both teams as JMU was more advantageous after scoring on half of their shots on target, while the Tigers could only manage one goal after six shots on targets.

“It was a combination of us not taking the best shots and their keeper making some good saves in the first half,” Paynter said. “We didn’t capitalize on our first few chances, but the first 45 minutes was some of the best soccer I’ve seen us play.”

Towson will have its next conference test against Drexel University at 7 p.m. Friday, Oct. 2. 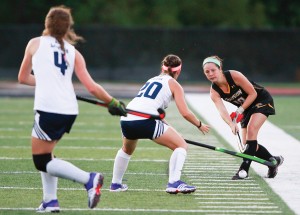