You know what’s really been grinding my gears lately? Well, a lot.

But, currently, my gears are being ground by 1) the fact that trans people are being denied the right to use the bathroom that makes them the most comfortable and 2) the fact that the biggest argument used to “justify” this denial is that if transgendered women (women whose sense of identity does not correspond with their birth sex) use the same bathroom as cisgendered women (women whose sense of identity corresponds with their birth sex), it would put cis women and children in danger.

First of all, y’all, trans women are women. This isn’t up for debate.

Forcing a person to use a bathroom they do not feel comfortable using denies their identity, and who the hell are we to deny anyone’s identity?

Secondly, a woman literally just trying to use the bathroom in peace is not a threat to other women and children. Forcing a woman to use the men’s bathroom won’t make anyone “safer.” In fact, doing so puts that woman at risk, makes her uncomfortable and denies who she is — who she may have gone through hell to proudly be.

If our government really want to keep women safe, how about we stop letting rapists get away with little to no punishment? How about we make women’s healthcare (including abortion) safer and more accessible? How about we stop treating trans women like they aren’t women?

Here’s what I have to say to any member of our government who thinks letting all women share one bathroom is a threat to women and children: Stop using your “concern” for my “safety” to propel your hateful agenda.

You weren’t concerned for my safety when you let Brock Turner, found guilty of sexually assaulting a woman behind a dumpster, go back to living his life after just three months in jail.

You weren’t concerned for my safety when David Becker, charged with sexually assaulting two girls, was only sentenced to two years of probation. You weren’t concerned for my safety when you allowed him to “look forward to a productive life without being burdened with the stigma of having to register as a sex offender” because you didn’t want to “impede this individual from graduating high school and [going] onto the next step of his life,” as described by Thomas Rooke, Becker’s lawyer.

And don’t tell me that women trying to use the damn bathroom are a threat to the safety of children, because you weren’t concerned for the safety of children when you let then 16-year-old Kraigen Grooms serve only two years and four months in jail after pleading guilty to “engaging in a lascivious act with a child.”

I will never worry about who uses the stall next to me, who shares a mirror with me, or who laughs at me when I can’t get the automatic paper towel dispenser to work. No.

As a cis woman, I refuse to be spoken for as a means to catalyze transphobia. Trans rights are women’s rights, and we won’t let hate win. 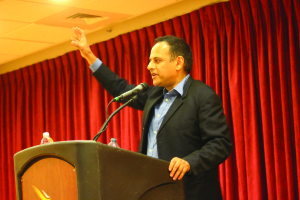