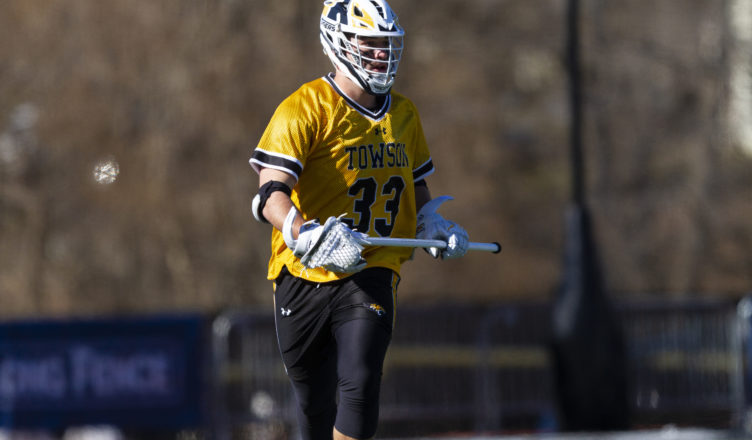 Heading into Saturday’s game at 16th ranked Georgetown, the men’s lacrosse team had already played 2 regular season games in which they held large leads for most of the contests. Entering the 4th quarter, however, this weekend’s matchup against the Hoyas (2-1), did not seem it would fit in that same storyline.

The Tigers used a strong fourth quarter to defeat Georgetown 14-8 at Cooper Field in Washington, D.C.

Through the first three quarters of play, No. 9 Towson (3-0) was able to keep consistent possession and successful clearing attempts, but were creating mistakes by turning the ball over.

“We need to clean up the clearing game,” said Head Coach Shawn Nadelen. “We can’t just hang on to the ball too long. We’ve just been stagnant moving the ball around.”

Towson got hot  near the end of the third quarter, putting together a 5-0 run over a 8:57 span. This gave the Tigers with a six-goal cushion that proved insurmountable for the Hoyas.

Having another stellar week on faceoff draws was senior midfielder Alex Woodall, who won 19 of 23 faceoffs, giving the Tigers a huge advantage.

“Alex did a great job at the face-offs to help our defense out,” Nadelen said.

Junior goalie Tyler Canto made 14 saves on the afternoon, continuing his hot start to the season.

“Our guys did well matching up well with personnel.” Nadelen said.

This Wednesday, the Tigers will face undoubtedly their toughest foe yet when cross-town rival, and top-ranked Loyola visits Towson at Johnny Unitas Stadium at 6 p.m.

“We gotta do a good job of getting our bodies ready to perform our best,” Nadelen said.