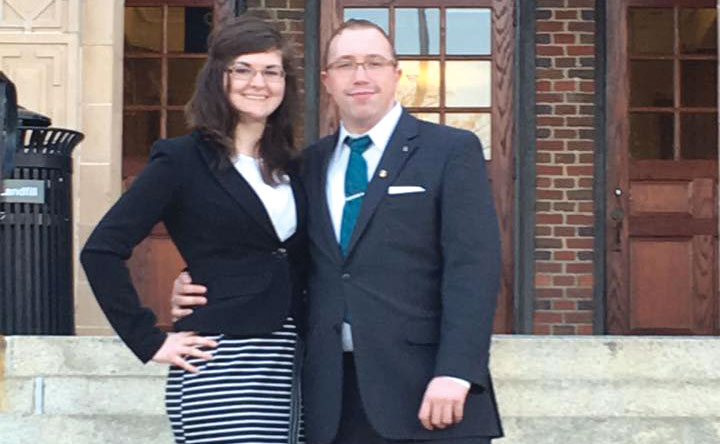 Marketing and e-business double major William Newman was announced as the winner of this year’s annual student business competition, “The Associate,” Tuesday after facing off against fellow finalist Daniela De Leon.

Newman said that in the first couple of weeks he felt like a motivational speaker. He was very wordy and felt rehearsed.

“Be a good presenter without sounding cocky,” Newman advised. “I’m passionate, so I can sound confident.”

While the judges struggled to choose between Newman and De Leon, the decision was eventually based on personal growth throughout the seven-week course, according to judge and presenting executive Brad Callahan.

“[Newman] started off too rehearsed, and became much more natural and comfortable,” Callahan said.

As presenting executive, Callahan, president and chief executive officer of Vantage Resort Realty, acted in a role comparable to Donald Trump on “The Apprentice.”

Organized by the College of Business and Economics, “The Associate” is a premier business case competition in which graduating seniors vie for a post-graduation job with the host company.

Each week, students were tasked with creating professional presentations to address real-world business situations that involve marketing, planning and more. One student is eliminated every week until there is a single winner.

This year, the students worked with a range of businesses such as Vantage Resort Realty, Mangia D.C. Food Tours and Target, among others.

One of the biggest challenges for Newman was to juggle his schoolwork with the competition. He would spend 16-20 hours per week coming up with and implementing ideas, basically living in the library on weekends.

He said that time management was extremely important, especially during his midterms.

For the final week, De Leon and Newman had to put together a package for Vantage Resort Realty that would be enticing to customers and create publicity for the company. Both competitors worked on drawing people to Vantage’s Myrtle Beach properties.

Finance major Daniel Ahmed was eliminated earlier in the competition, but worked with De Leon in preparing her final presentation.

“We worked every day,” he said.

De Leon chose to work with Ahmed because of his budget and number skills. Newman was aided by marketing major Candace Steadman because they worked well together earlier in the competition.