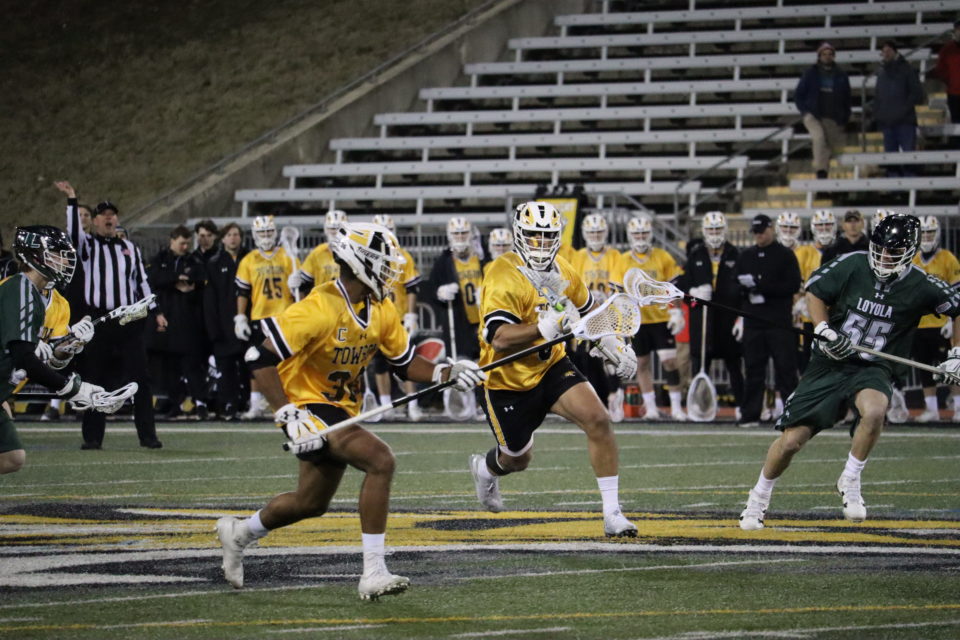 A five-game winning streak was snapped Sunday afternoon when No. 1 Towson endured its first loss of the season in an 18-11 defeat at the hands of No. 2 Cornell at The Crown Lacrosse Event in Charlotte, North Carolina.

Coming into Sunday’s game as the top ranked team, the Tigers (5-1) had to recuperate quickly after having to grind out a hard-fought win amid torrential downpour against Jacksonville University less than 48 hours prior.

“I think the tournament helped us learn and grow in a hopefully positive direction as a team,” said Head Coach Shawn Nadelen. “We had to play against a tough, scrappy team from Jacksonville and they exposed us in certain ways and took us to the wire.”

Sunday’s game against the Big Red (4-1) got off to a good start for Towson. Despite ending the first quarter holding a 5-3 lead, Towson’s momentum was soon squashed as Cornell outplayed the visitors in the second quarter.

In addition to forcing turnovers on both offensive zone opportunities and clearing attempts, the Big Red outshot the Tigers 11-4 during that time, and were able to find success in clearing the ball in their defensive zone. Cornell ended up outscoring Towson in that quarter 9-1 to take a 12-6 lead into halftime.

Nevertheless, Towson was persistent and looked to make amends in the second half. They chalked up 15 shots in the third quarter and only allowed six while forcing four penalties. But they were only able to capitalize once on the extra man opportunities and entered the final frame of play down 15-8.

Cornell’s man-down defense was strong, holding Towson on all three of its extra man chances in the fourth quarter to secure the win.

“We came out hot, but when Cornell turned up the heat, we just couldn’t stop the bleeding,” Nadelen said, “We just weren’t as clean in the clearing game and were careless at some key points. Cornell came back and capitalized.”

Even though they suffered their first loss of the season, Nadelen sees this as a crucial learning experience for the team.

In their Friday night game against Jacksonville (1-6), which was intermittently stopped due to some rainy conditions, Towson leaped to a strong start thanks to sophomore attackman Luke Fromert. He tallied two of his team’s first three goals.

Towson’s defensive effort performed just as well in the first quarter. Junior goalie Tyler Canto posted five saves in the period, holding the Dolphins to just one goal in that quarter.

With the offensive support of junior attack Brody McLean, senior midfielder Grant Maloof and senior attack Brendan Sunday, the Tigers built a 6-1 lead over the Dolphins with 13:47 remaining in the second quarter.

Despite consecutive Jacksonville strikes around the middle of the second quarter, Towson bounced back 36 seconds later when McLean notched his second goal of the evening. The Tigers took an 8-5 advantage into halftime.

In the third quarter, the Tigers outscored the Dolphins 5-2 with sophomore long stick midfielder Koby Smith and junior midfielder Jake McLean adding their names to the score sheet.

However, a fourth quarter in which the Tigers turned the ball over 10 times and were outshot 13-6 gave Jacksonville a chance to cut into the deficit, but Towson held on for the win.

McLean led all scorers with five goals on the evening, while Maloof stepped up scoring a season-high four goals. Canto made six saves in the contest.

Next Saturday, the Tigers will head back to North Carolina as they travel to No. 2 Duke in what should prove to be a huge test for the squad.

“We gotta focus and continue to work,” Nadelen said. “When Tuesday comes, that’s gotta be our best practice of the year.”

Previous post Towson feeling the effects of a difficult schedule