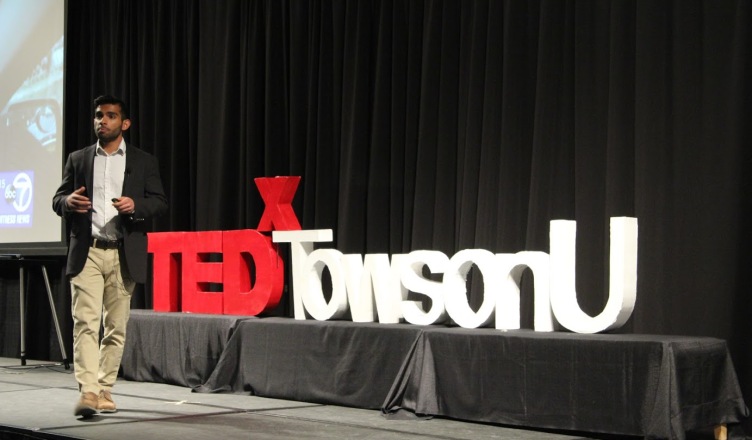 Eight speakers put their spin on the theme of “forward” during this year’s TEDxTowsonU event in the West Village Ballrooms on May 11.

The TEDx event was inspired by the TED (Technology, Entertainment, Design) conferences that were founded in 1984, and explore a variety of topics through storytelling.

Special Olympics athlete Adam Hays shared his experiences of having an intellectual disability which he attributes to his hydrocephalus, a condition in which cerebrospinal fluid builds up around the brain. Hays, who is 32 years old, has had 34 major brain surgeries in his life.

Hays said these words lifted him up and told him that he has a place in his community and that he belongs. He also acknowledged that while people with disabilities have the rights to do all of the things Shriver spoke about, they’re still often segregated from society.

“And yet, we are no further ahead from the day [Shriver] spoke these words on August 2, 1987, than this moment right now,” Hays said.

Hays said society has been slow in becoming more accessible for people with disabilities.

Instead of waiting for society to change, Hays has taken action to achieve his own goals and advocate for other people with disabilities.

“Words inspire action, but they’re only just words if no action are born from them,” he said. “I took these words and I made them into action.”

Hays participates in five sports in the Special Olympics throughout the year and earned his high school diploma and an associate’s degree.

Hays said he recently celebrated his 10th year working at Special Olympics Maryland and his first year of living on his own in his apartment.

Associate Director for Cultural Competency Education Brian Jara addressed gender identity and male expression, speaking about the many ways men greet each other in America such as handshakes, high fives and fist bumps.

In New Zealand, Jara said Māori, the indigenous people of New Zealand, greet each other by hongi, a traditional greeting in which people touch their noses and foreheads to one another.

According to Jara, Māori greet each other through hongi to acknowledge that everyone is interconnected.

“So hopefully, we can get to a point that our campus, our community, our town, makes it more okay, gives us more possibilities, gives us more options for how men can be themselves and how they can greet each other,” Jara said.

Jara encouraged the audience to think about where they may be on a scale of gender expression and gender identity, and to start thinking of genders, sexes and identities in a plural sense to “make room for more possibilities.”

She said that one of the reasons America has structurally deficient bridges is because salt is used on the road during slippery conditions.

Salt corrodes and deteriorates the bridges because many of them are made of steel, Head said.

“So it makes you wonder: we build these bridges, we put these salts on them to make them deteriorate and we have to repair them again,” Head said. “Does that make sense?”

Head created a bridge-deck system that is non-magnetic and corrosion-resistant. She has been able to test this system at Morgan State University with students and has even performed a test to simulate how the bridge system would hold in an earthquake.

Kwame Shaka Opare, a teaching artist and youth advocate, spoke about the systematic miseducation of African-Americans and how he uses music in the classroom to inspire his students to succeed.

Opare, who has been a teacher for more than 10 years and has taught in Baltimore City Schools, is focused on making sure that students who are struggling academically do not get left behind.

Opare teaches music and said that once students see that they can succeed, they start believing in themselves in other parts of academics.

Student and President of the Women and Science Club Veronica Canarte highlighted the difficulties that women, especially women of color, face in the science, technology, engineering and math (STEM) fields.

“So what can we do?” Canarte asked. “We can start by asking, ‘how are you, how am I — even as a non-black minority — participating in the systems that create race and gender biases?’”

Hameed told the story of an Uber driver named Anwar Syed who spent five days in the hospital after being beaten by a passenger in Long Island in February.

Hameed said this was one of the many Islamophobic attacks that occurred after the 2016 presidential election.

Student and CEO of Break Box Ryan Perpall described his company as a way to increase environmental sustainability by decreasing greenhouse gases and climate change.

Perpall said he plans to increase environmental sustainability with Break Box by having people come to his company’s location to smash bottles and recycle the glass pieces into something that can be made into a whole new object.

Perpall announced that he is launching the Break Box summer tour at the end of this month with what he described a “mobile smash shop.”

Student and disc jockey Nosa Isabor spoke about his passion for music sampling. He showed the audience some of the processes he went through to make his own beat and new sounding tune.

“I wanted to create my own instrument,” Isabor said. “This is an instrument that I think most people can piece together. I don’t know how to play the flute but I was able to create something close to it.”

Student Spencer Franklin reflected on his time listening to speakers at this year’s TEDx event.

“I think [the speeches] are really interesting,” Franklin said. “I find them inspiring too.… I feel like this is an event that kind of lets you explore your other side of creativity and imagination. I also think it helps you see things from a different angle or different perspective.