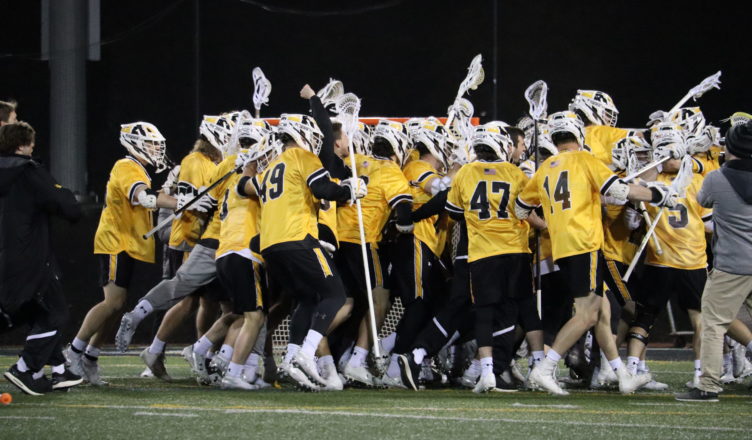 Wednesday night, the undefeated Tigers faced their toughest test of the season: the No. 1 ranked Loyola Greyhounds. In front of a crowd of over 2,500 people packed at Johnny Unitas Stadium, the Tigers (4-0) did not disappoint as they pulled off a 12-10 upset of the Greyhounds (3-1).

“I’m excited for our program to earn a win against a top team in Loyola,” said Head Coach Shawn Nadelen. “We were fortunate to make quite a few plays down the stretch.”

Towson’s offensive pressure was applied right from the opening face-off and it didn’t take long for the team to break the deadlock. Senior midfielder Grant Maloof tallied the opening goal less than three minutes in. Two minutes later, senior attack Brendan Sunday added to his scoring total by split dodging right to left and beating the Greyhound goalie at the far side post.

Despite a Loyola tally that cut the Tiger lead in half, Sunday, and senior midfielder Timmy Monahan added a goal each to stretch the home team’s lead to 4-1.

During a quarter in which the Tigers struck the post four times, the score could have easily been more lopsided.

Unfortunately for Towson, the second quarter was a different story. Despite an early Sunday goal to stretch the lead to four, Loyola was able to string together three of the game’s next four goals in under four minutes.

Just when it seemed to be the home team’s night, Towson took a slim 6-5 lead heading into halftime.

Loyola was able to eventually even the game up at 6-6 early in the third quarter.

Offensively, the rest of the quarter was a struggle with both teams failing to capitalize on man-up opportunities, turning the ball over in transition and sometimes struggling to clear.

“I didn’t think either team was especially sharp at points during the game.” Nadelen said.

Sunday responded with a goal to put the Tigers ahead just before the fourth quarter.

Just 29 seconds into in the final frame, redshirt sophomore attackman Luke Fromert scored off a feed from Sunday to make the score 9-7.

The play of the game came with 10 minutes left in the game. Loyola had the ball and made a pass to sophomore attackman Kevin Lindley. Lindley was wide open and sitting on the edge of the crease to the the right of Towson junior goalie Tyler Canto.

Lindley faked a shot attempt before moving laterally to the right of the crease, with Canto, because of the fake, falling to the opposite post and completely out of position. Despite this, Canto stuck out his stick to make a desperation save from his knees as he somehow was able to place his mesh right where Lindley was planning to score and made an amazing save.

“I was just trying to watch his stick the whole time,” Canto said. “I knew he had to shoot and I was already on the ground, so I just threw my stick out there and I was lucky enough to get it.”

With just over five minutes left to play, junior attackman Brody McLean notched his 12th goal of the year to extend the Tigers’ lead to 11-8.

The Greyhounds scored back to back goals in under a minute put Towson to keep the game close.

Senior midfielder Alex Woodall won the most important face-off of the game with just over two minutes left, giving the Tigers time to drain the clock. Woodall won 20 of 26 faceoffs in the game.

“It’s a big win for our program,” Sunday said, who has now produced back-to-back four-goal performances. “It’s nice to know that we can hang with teams like that.”

After dethroning the No. 1 team in the nation, the Tigers were rewarded with the top spot themselves. Towson is now ranked No. 1 in all three major Division-1 collegiate lacrosse polls for the first time in program history.

Next weekend, the Tigers will fly south to Charlotte, North Carolina, where they will take on Jacksonville on Friday, March 8 at 5:30 p.m. and Cornell on Sunday March 10 at 1 p.m. in the Crown Lacrosse Event tournament.