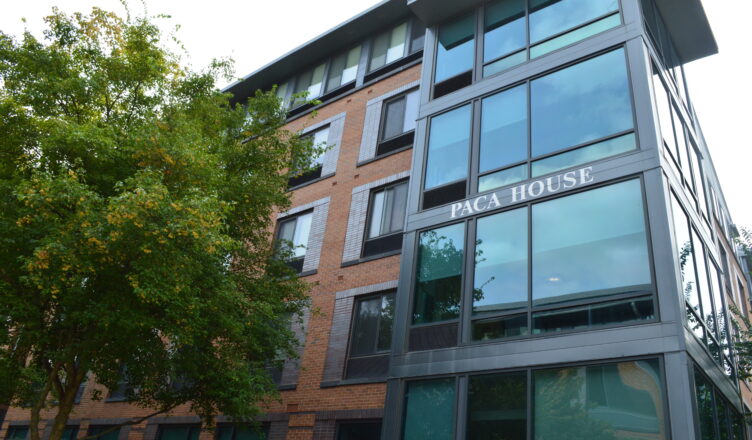 CLARIFICATION: This article reflects facts collected prior to and in an April 30, 2021 interview with TU President Kim Schatzel, and does not cover any developments made after April 30. While it was written on April 30, it was published on May 24th due to The Towerlight’s print publication schedule. Other news outlets, including The Daily Fix, have done additional reporting on this issue since April 30.

One year after being assembled, Towson University’s committee tasked with reviewing the names of Carroll Hall and Paca House, has not decided whether or not the buildings should be renamed.

The buildings are named after slave owners and Declaration of Independence signatories William Paca and Charles Carroll. For the past few years, students have urged the University to reconsider these building names.

As previously reported by The Towerlight, in Sept. of 2016 student Bilphena Yahwon, a member of Towson’s Organized Network of Student Resistance, urged officials at a Maryland regents meeting to diversify these “insensitively-named” University buildings.

At that time, one year following the #OccupyTowson presidential office sit-in which demanded increased diversity and inclusion on campus, the University hired a new president, Kim Schatzel.

In 2017, following a white supremacist rally in Charlottesville, Virginia, Schatzel announced plans to implement a new naming policy process “for transparency and inclusive consideration of a building name,” as quoted in a previous Towerlight article.

Last spring, student group Tigers for Justice created a petition calling on the University to rename Carroll Hall and Paca House, garnering over 8,500 signatures. After the Student Government Association (SGA) heard of this petition, they submitted a formal request to Schatzel asking for a committee be formed to review the names, in accordance with the re-naming policy.

Schatzel announced the creation of this committee almost a year ago, and Vice President of Student Affairs Vernon Hurte was named the chair.

In August of last year, Schatzel reported to The Towerlight that the committee would present her their recommendation on whether or not the building should be renamed mid-semester.

On April 30, Schatzel reported that a recommendation had not been reached.

“We’re still managing that process,” Schatzel said. “There’s no deadline within the policy to be able to do that but we’re moving as promptly and as expeditiously as possible and I very, very much appreciate the committee’s work to be able to support that request by SGA to be able to consider the renaming.”

She added that the pandemic is a factor in the progress of the committee.

“We want to be as expeditious as possible, but what’s far more important is that we do it well,” she said. “We’ve never done this before as a University. I’ve got a great committee together to be able to do it, Dr. Hurte is chairing it so I am very, very confident of the work that is progressing well.”

Student Sarah Fishkind believes there is enough evidence through history to prove the building names to be harmful.

“It is really bothersome to see the University that claims to celebrate diversity, equity and inclusion, but is still struggling to decide on whether or not they should rename building names that were named after slave owners,” she said.

Jordan Smith, who is also a student at TU, hopes the renaming is not prolonged until students forget, or until students leading the initiative graduate.

“I hope that Towson doesn’t think that we’re going to forget about this because this is something that is important,” he said.

Smith suggests the University provide progress updates on a semesterly basis or more, even if no or little progress has been made.

Fishkind added that this renaming is the first step of many toward diversity and inclusion on campus.

“Towson must also systematically change its ways in order to ensure all students are welcomed on campus,” she said.

For Delano Powell, a student at TU, his perspective is that the renaming seems to no longer be a priority, noting a disconnect between the University’s pride for its diversity, and the time it has taken to review the names.

“Although many things can require deliberation, a decision to change the name of these buildings from slave owners should take moments, not years,” Powell said. “This is not a new issue, and it’s long overdue.”

UPDATE: As noted above, the committee submitted its findings on May 12 to the University. President Schatzel