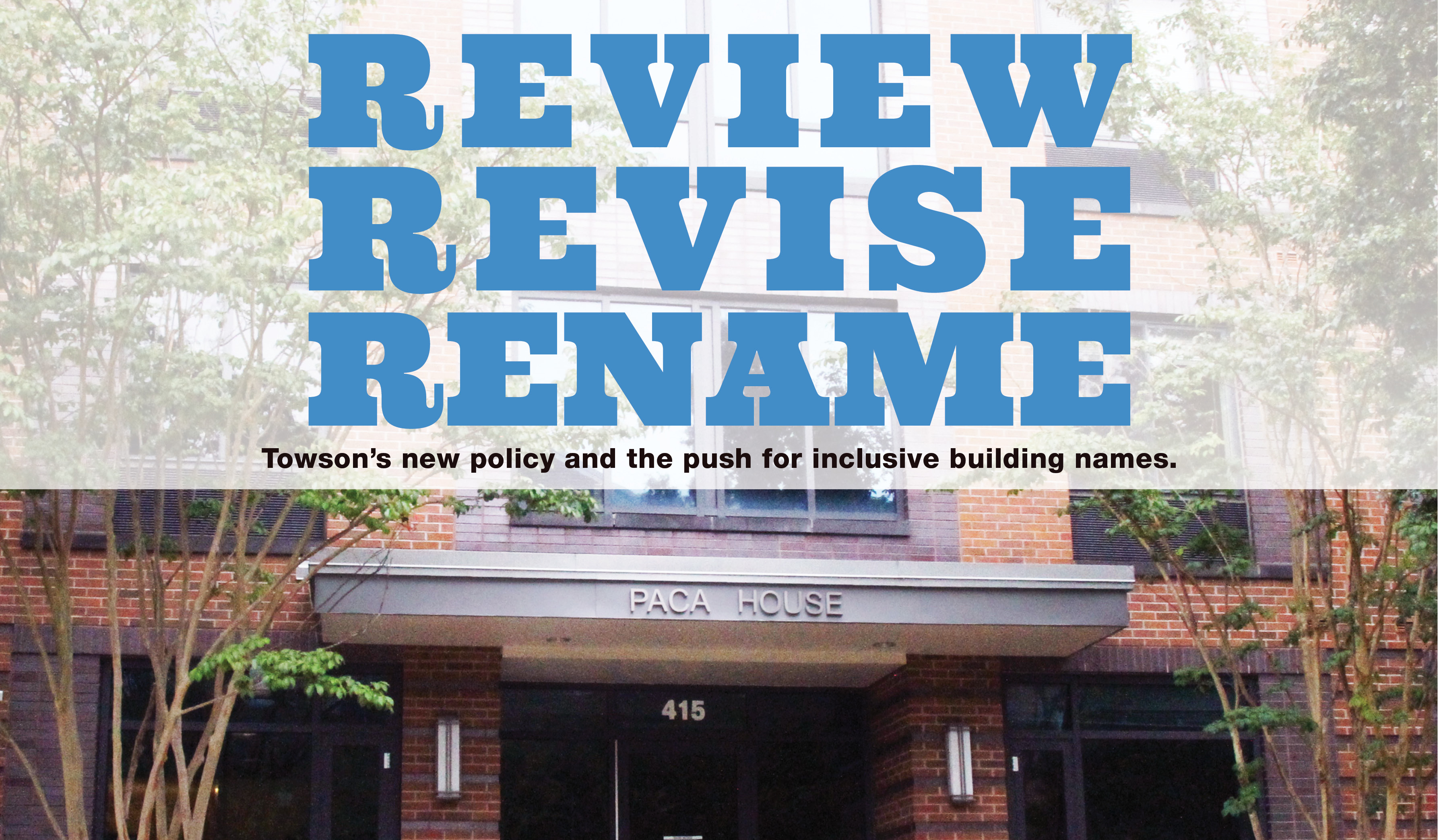 Violent clashes during a white supremacist rally in Charlottesville, Virginia, that resulted in the death of a counter-protester have pushed cities to debate whether or not to keep Confederate statues and monuments on display.

Some cities, including Baltimore, have taken steps to remove those monuments. Baltimore City work crews removed four monuments under the cover of darkness in the days following the violence in Charlottesville.

Here at Towson, a similar call has arisen to advocate for name changes of two on-campus residence halls, Paca House and Carroll Hall, and in the process, to implement a formal building-naming policy on campus.

Both Paca and Carroll owned slaves.

Student activists Bilphena Yahwon and Breya Johnson have spent a considerable amount of time campaigning together for these changes.

“We’re right next to Baltimore,” said Johnson, who, this year, is vice president of the Student Government Association. “We’re right here. What happens in the city is connected to what happens here. So, when we’re removing Confederate monuments in the city, we have to look at what’s on our campus.”

The University is close to implementing a naming policy that will provide a process “for transparency and inclusive consideration of a building name,” according to University President Kim Schatzel.

The new policy will be submitted to the President’s Council on Wednesday, according to Vice President of Student Affairs Deb Moriarty, and assuming it is approved, it will be immediately implemented.

The policy outlines a process to define honorific names and philanthropic names. It also defines who should be on a committee to approve a building name, as well as the criteria that needs to be considered for a name to be approved, according to Moriarty.

SGA has been involved in the process, and has provided feedback on some of the language in the policy, to make it “a little more specific, without excluding important issues,” according to SGA President James Mileo.

Part of the language includes that the naming committees will exclude potential names of individuals who participated in immoral, unethical or illegal behavior.

Johnson felt that this language was subject to interpretation and opinion, and pushed to include the term “anti-racist” in the policy, too. However, that was turned down, and instead, the policy includes a section that makes it a requirement for an individual from the Office of Inclusion and Institutional Equity to approve the name, too.

“That’s when we ended up having to compromise on the Office of [Inclusion] and Institutional Equity being in there, so at least someone from there who has that mindset, who’s coming from that perspective, reviews the name,” Johnson said.

According to Moriarty, the document has been written to be inclusive of all intentions, as well as to have a more positive way of framing those intentions.

“We had a lot of language in the original one, and part of what we tried to do was try to find the phrases that capture the essence of it without including everything that will not be considered,” Moriarty said.

When the original research was done for West Village housing before the building plans were implemented, all of the research for the names was done at the same time, even for Carroll Hall, which did not open until fall 2016. Each building followed a theme, “Famous Marylanders,” according to Moriarty.

Noting a societal change, she said that the information that was available during the original research was not as transparent as it is today.

“We were working with the history that was readily accessible at a point 10 years ago that is not as thorough as what is available in 2016,” Moriarty said.

The Towerlight previously reported that student activists attended a September 2016 University System of Maryland Board of Regents meeting on campus to campaign for greater diversity measures and more inclusive building names.

“From College Park to Towson University, our universities have chosen to pridefully advertise slave owners and white supremacists with statues, memorials and buildings,” said Yahwon, quoted in a previous Towerlight article. “This is an act of violence against black students.”

USM Chancellor and former Towson University President Robert Caret established a USM Diversity and Inclusion Council, which resulted from input gathered from all 12 USM institutions by a regent workgroup.

Former SGA Attorney General Patrick Mascio was appointed by former SGA President Taylor James to sit on the committee to review the building naming process, and worked alongside an internal SGA committee, according to Mileo.

Caret made a statement on USM’s commitment to diversity and inclusion on Dec. 11, 2015 that reaffirmed the system’s commitment to “supporting and nurturing a culture of diversity, inclusion, and fairness” on all campuses. During the September 2016 Board of Regents meeting, Yahwon urged the regents to commit to their word.

In terms of changing the names, Johnson stressed the importance of not downplaying how important symbolism in a campus environment.

“So, for me, it’s not just the name, it’s the fact that that name is not a dealbreaker,” Johnson said. “I don’t want students to feel like their University, their administrators, their professors, whoever was involved in their process, doesn’t see racism as a dealbreaker.”

However, Johnson feels that this is a larger issue that extends past the University and into the Board of Regents.

“I think that the University System of Maryland should commit to this value, and they should look at all their names and understand where they are,” Johnson said. “I don’t think it should be just Towson and Maryland. It should be the system, and that’s why I think Bilphena and I are so adamant on this is something that Robert Caret should be doing. We’re very much a top-down kind of people, because…it’s the whole system.”

In an email, Mike Lurie, a USM spokesperson said, “As a matter of policy, the Board of Regents considers approval of the naming of campus facilities based on requests submitted by institutions. In practice, we are unaware of any occasion in recent years when the board has rejected a naming proposal (including a proposal at the University of Maryland, College Park in December 2015 to rename Byrd Stadium) made by a respective campus.”

Similar initiatives have been pushed at college and university campuses throughout the country and in Maryland, too.

In 2015, the Board of Regents voted 12-5 to change the name of University of Maryland, College Park’s, Byrd Stadium to Maryland Stadium.

The stadium was originally named for Harry C. “Curley” Byrd, who served as the University’s president from 1935 to 1954, but was also known for his opposition to integration during the early Civil Rights movement, according to reporting from the Baltimore Sun.

Most recently, UMD’s marching band announced that they will no longer play the controversial state song, “Maryland, My Maryland” because of its Confederate ties.

Leah Cox, Towson’s vice president for inclusion and institutional equity, has been in her position for just about eight months, and is part of the committee who worked to develop the new policy.

Cox worked at the University of Mary Washington in Fredericksburg, Virginia, and was appointed to her position at Towson in December 2016, before officially starting on Jan. 23.

She said that the impact of using names like Carroll and Paca is hurtful to the University’s growing diverse population.

“Yes, there are some students who are unaware,” Cox said. “They wouldn’t know if you asked them who was Paca and who was Carroll, but, for those students who are aware, it is hurtful, and it’s a reminder that the people who we’ve chosen to name the buildings after were folks who would have never allowed you to be on this campus.”

Mileo acknowledged that during URTU’s run for office last semester, they ran on an “idea of moving students from the margins to the centers,” a phrase used often by Johnson, according to Mileo.

The phrase is a feminist theory found in the 1984 book “Feminist Theory: From Margin to Center” by feminist scholar and activist bell hooks.

For Mileo, part of doing that involves acknowledging those students’ experiences.

“When buildings are named after slave-owners or anyone who has committed atrocities against any specific group of people, we don’t want students to have to live in a building that’s named after that,” Mileo said. “Our black students on campus shouldn’t have to feel that weight going home to the place where they’re supposed to be [in] their safe space.”

According to Mileo, the action plan once this policy is completed will be to put Carroll and Paca back through the policy to push for name changes.

While Mileo said he is sure there would be some pushback on a decision to change the building names by people who may not agree with it, he is confident that those buildings will be renamed, and he is happy with the University’s increased reception of issues that SGA has brought up on behalf of students.

“I like to say I represent all students, but I don’t represent the values of all students,” Mileo said. “And so, our values as an administration that students voted in, our values as students who love all people, are to make sure that all of our students are comfortable and feel safe on our campus. And so, this is something that has to happen in order to do that, so we’re going to do it.”

Johnson believes that having this policy will save the University from “a lot of unnecessary backlash from students.”

“I think it’s just going to really show people that their stance is serious, so it’s not performative,” Johnson said. “And, anything that’s not in line with their values is not welcome here. So you can donate all the money you want, but if you are not in line with this mission statement that we have here, you do not get to be represented here, and to me, that’s the larger thing.”