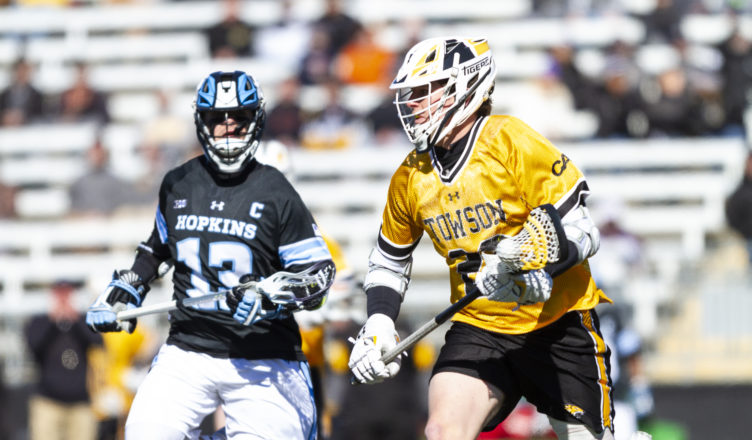 “We want to play to our ability and style and we want to do it as quick as possible,” Nadelen said.

It took until the second quarter  for those expectations to come to fruition, but for the rest of the contest, it felt like Towson (1-0) couldn’t help, but force the visiting Blue Jays (0-1) play from behind as the Tigers routed Johns Hopkins in a 17-8 upset.

Despite trailing 4-2 at the end of the first quarter, the Tigers rallied back with an impressive 9-0 run.

The momentum shift began early in the second quarter when junior attacker Brody McLean scored his first two goals of the season to tie the game up at four goals apiece. But the Tigers were just getting started.

Just 2:06 later, senior midfielder Grant Maloof added another tally to give the Tigers their first lead of the game, and they would never look back.

Towson’s face-off success played a big role in the victory with senior midfielder Alex Woodall winning 21 of 28 faceoffs and picking up 17 ground balls. He added one goal and two assists as well.

“I think our whole team kinda came together in that [second] quarter,” Woodall said. “I think faceoffs helped a little bit, I feel like when me and the wings get in a groove, that’s when we’re at our best.”

Goaltending also played a huge part in Saturday afternoon’s rout as junior goalkeeper Tyler Canto made 10 saves on 18 shots. Canto, who made his first career start as a Tiger on Saturday, was quick to give credit to  the team’s defense.

“My defense played great out there, and allowed them to take low angle shots on me, which allowed me to do as well as I could in the net,” Canto said.

Towson looks to continue its groove Friday afternoon when the team heads to Emmitsburg to face off against another in-state foe, Mount Saint Mary’s. Game time is set for 3 p.m. at Waldron Family Stadium.

The Tigers will return home to Unitas Stadium on Feb. 27 for a 6 p.m. showdown with yet another in-state opponent, the Loyola University Greyhounds.