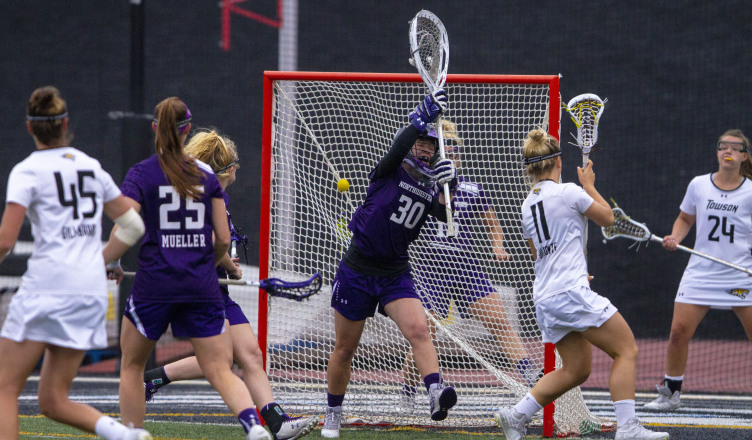 Facing one of the highest-scoring offenses in women’s lacrosse is never an easy task.

Unfortunately for Towson, that’s what it faced against Northwestern in the second round of the NCAA Division I Women’s Lacrosse Tournament at a misty Johnny Unitas Stadium Sunday afternoon.

The No. 7-seeded Tigers were overpowered by the unseeded Wildcats 21-17 after a quick five-goal run early in the second period put the Wildcats up for good.

“I’m just really proud of our team, the season they had this year and how they competed out there today,” Head Coach Sonia LaMonica said. “Northwestern was outstanding, particularly in their shooting. Twenty-one [goals] on 29 shots; that’s outstanding.”

The first period was back-and-forth as the two teams tied the score five times, with Northwestern taking an early 2-0 lead five minutes into the period. Senior midfielder Emily Gillingham shot an unassisted goal to bring Towson within one, but Northwestern put up another goal soon after.

Junior attacker Natalie Sulmonte then went on a three-goal tear with two free position scores and one unassisted goal to give Towson its first lead of the day midway through the period. The two teams traded goals for the remainder of the period, entering halftime locked at 8-8.

After both teams exchanged goals early in the second half, the Wildcats seized control of the game with five goals in less than four minutes to take a commanding 14-10 advantage.

“We never quite recovered from [that scoring run],” LaMonica said. “We definitely battled hard and they were able to continue to chip some goals in there as well. That was the stretch that broke up the lead.”

The two teams continued their strong offensive performances, but Northwestern’s multi-goal lead proved insurmountable for Towson. The Tigers cut the deficit to three with just over four minutes remaining as Sulmonte scored her fifth goal of the day and 50th on the season, but they could not complete the comeback.

Northwestern was a perfect 8-for-8 on free position attempts in the second period and had eight goals apiece from junior attacker Selena Lasota and senior midfielder Sheila Nesselbush.

A seven-time former NCAA tournament champion, Northwestern advances to the quarterfinals for the first time since 2015 to face No. 2 seed North Carolina.

Friday afternoon, Towson was under much less offensive pressure, defeating Wagner College 16-6 in the opening round of the NCAA tournament.

The Tigers were hot out of the gates as Gillingham scored an unassisted goal just nine seconds into play, tying an NCAA tournament record.

“My defense relaxed and the rest of them walked off, and I knew I’d take [the Wagner defender] because she softened up there,” Gillingham said.

Gillingham and senior midfielder Kaitlyn Montalbano lit up the scoreboard against the Seahawks, scoring seven of the team’s 16 goals on the day. Freshman attacker Kaitlyn Thornton also had a solid outing as she recorded two goals and two assists.

“I’m just so impressed with Rachel’s focus,” LaMonica said. “She’s so in the moment, and you can see that on the draws in particular where she just focuses everything into that moment.”

Despite Sunday’s tough loss — both in terms of the tournament and the team’s seniors — the Tigers put together a solid season and have a solid foundation of youth to build upon.

The team ranked unanimously in the top 10 of the three major NCAA women’s lacrosse polls for the first time since 2010 and won 14 of its first 16 games to start the season, highlighted by a nine-game winning streak from mid-March to late April.

“We will keep this momentum going into next year,” Conti said. “We have a lot of talent returning, so we’re going to keep moving on.”