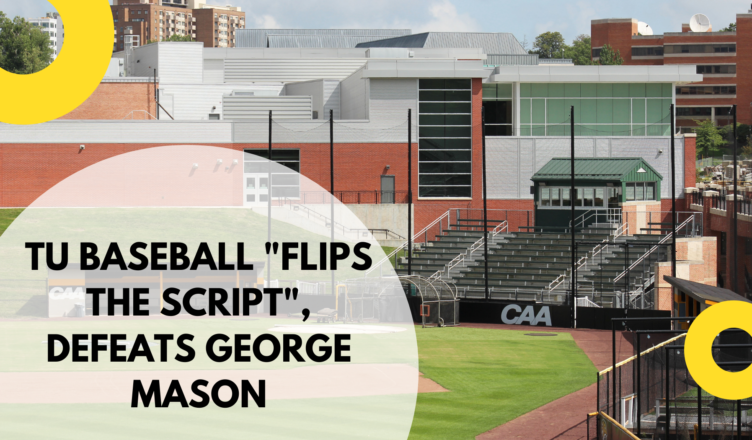 Despite an eight-inning shutout from Patriots (4-10) starting pitcher, junior right-hander Jared Lyons and a 2-0 deficit heading into the ninth, The Tigers (6-16)  scored three runs to come back and win 3-2.

Through the first six innings, it was a pitcher’s duel between junior right-hander Josh Seils for the Tigers and Lyons. Through four innings Seils allowed two hits and struck out six batters. Lyons gave up one hit and recorded five strikeouts. He nearly finished the game, going 8.1 innings and striking out 10 with only one allowed hit.

“It was a very well-pitched game on both sides and that’s what kept us in the game, defensively we played well also and that gives us an opportunity to make a comeback like we did in the ninth inning.” TU Head Coach Matt Tyner said.

Seils started the game with a walk but a double play ended the inning. In the second inning, the Patriots took advantage of a sacrifice bunt and scored the first run of the game on a base hit RBI.

It was a windy day in Towson, a few foul balls sailed farther than normal. According to Tyner, it added an extra challenge to an already difficult day at the plate.

In the bottom of the fourth, a double from graduate student outfielder Billy Godrick and a failed pickoff allowed Godrick to advance to third. This was the only TU hit until the ninth inning. According to Godrick, Lyons used his slider effectively and was hard to identify.

“He was spotting up all three pitches, fastball, slider, and changeup around the zone,” Godrick said. “The whole day he was getting us out early in the count. We had a really hard time picking up his slider early on in the game.”

Seils retired nine straight batters from the second through fifth innings until he allowed a full-count walk.

The Tigers failed to capitalize on scoring opportunities. In the fourth and fifth innings they had two on but were unable to score either time.

After multiple earlier pickoff attempts, Seils finally succeeded and got the runner at first in the sixth. On the next at-bat he gave up his first hit since the second inning as Patriot senior outfielder Scott Morgan found a gap in center field. Seils explained that pickoffs were an emphasis entering the game.

“We take pride at holding our runners and mixing up timing,” Seils said. “Pickoffs are very hard to get in a game, I was trying to bury my looks. It was a big spot in the game and helped out a lot.”

In the top of the seventh Seils allowed back-to-back base hits to right. He eclipsed 101 pitches for the second straight start. After allowing the second he was pulled for sophomore right-hander Cam Clark. Seils finished with 6.1 innings pitched, he allowed five hits and two earned runs while striking out seven.

“It was incredible, he’s what we call a number one, he’s a true number one,” Tyner said. “He goes out there and gives you everything he’s got every Friday. Nothing more you can ask for from a pitcher than to do that. He keeps us in every game that he pitches. We would’ve loved to get the win for him but we’ll take a team win.”

Clark entered and gave up an RBI double down the left field line, but the second runner was tagged at the plate after a long throw from senior left fielder Noah Cabrera.

The defense continued to provide the highlights for Towson, in the eighth, junior third baseman Brandon Austin made a diving catch for an out. Clark was pulled after 1.1 innings and allowed one hit. Senior left-handed pitcher Austin Weber entered and ended the inning with a flyout. He allowed a base hit in the ninth.

In the bottom of the ninth Lyons surpassed 120 pitches after a throwing error and walk put two Tigers on. Junior infielder Nolan Young was caught stealing third, and Lyons was pulled with one out in the inning. A wild pitch put two TU runners in scoring position, and another wild pitch brought home the Tigers first run.

A sacrifice bunt from redshirt sophomore catcher Jacob Terao tied the game. Another bunt from sophomore outfielder Javon Fields loaded the bases with one out. Redshirt freshman infielder Danny Becarra walked off with a base hit to complete the comeback. This was the second time this season TU came back to win in the ninth, the first was on March 13 against Virginia Commonwealth University (VCU).

“A win like this can flip the script on your season because now the next time we’re put in this situation they’ll have faith and belief they can do it, so it’s as big of a team win as we’ve had,” Tyner said. “Three runs in the ninth, that’s a lot.”The Tigers headed to Fairfax, Virginia to face the Patriots for a doubleheader on Saturday, March 27, losing 9-10. They wrapped up the series at home on Sunday, March 28 with a 5-1 win. After their series against GMU, they look to play Coppin State on Wednesday, March 31 in Towson.