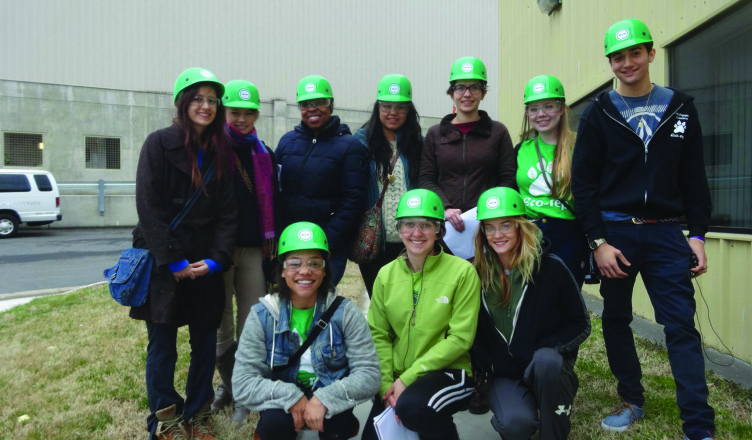 You’ve just polished off a pizza from Pazzelli’s Pizza in the Susquehanna food court, but you’re not sure about how to properly dispose of that cardboard box.

Towson University is working to make sure everyone on campus knows what to do with their trash to reduce the University’s carbon footprint and learn to care about the surrounding environment.

“The current goal is for students to successfully and confidently put waste in the right place,” Campus Planning and Sustainability Manager Paddy Watson said. “Every time you don’t recycle, you’re telling the administration and your peers that it’s not important, and it doesn’t matter. And if you don’t care, why should they? I don’t think that’s the intended message, so we are working to set students up for success by hosting educational training sessions.”

“I appreciate it because they have general waste, recyclables and composting,” said Jordan-Stovall, an economics and Deaf studies major. “That distinction is helpful. And in Paws, they have signs with the specific items that are sold in Paws, so people know how to dispose of them.”

“There are recycling bins on floors, but I think a lot of people just throw everything down the trash chutes,” he said. “So bringing awareness to recycling in buildings or making it more accessible could be one improvement.”

Last year, TU reduced carbon emissions by 44 percent and recorded a recycling rate of 35.6 percent, its best recycling rate ever. This year, campus is working to do even better.

With programs such as the Eco-Reps, a group of peer-educators who educate Towson about sustainability through presentations and outreach efforts, students can become more involved in the campus’ green achievements,

The university also has a Climate Action Plan that works to mitigate the campus’ carbon footprint.

“The campus works to reduce our carbon footprint through initiatives set forth by the President’s Climate Committee, which meets monthly to discuss our impact,” Watson said. “Currently, we are working to reduce the campus’ electricity consumption, improve building operations and metering, and reduce the impact made by commuters.”

TU’s American College and University Presidents’ Climate Commitment (ACUPCC) Committee is working on is expanding the number of solar panels on campus to reduce our demand on the grid.

Last summer, Towson installed about 4,000 solar panels on the roofs of the University Union, Union Garage and Douglass and Barton houses.

The committee is also working to divert edible food from being composted.

“We recently ran a composting pilot in two of the residence halls this semester: Douglass and Millennium,” Watson said. “For the standard, regular suites, we found that students were diverting one pound per week of compostable waste, which doesn’t sound like a lot, but if all students were to participate that would mean we could collectively divert over 20,000 lbs. (ten tons) per month.”

Towson’ buildings are also helping enforce green initiatives on campus. There are 9 LEED (Leadership in Energy and Environmental Design) buildings on campus which are designed to be more efficient and environmentally friendly, according to Watson.

Another green initiative TU is taking part of this year is donating items collected during move out to Ascension Lutheran Church on York Road.

“Ascension is going to host a community yard sale on June 3, with all proceeds going to the Assistance Center of Towson Churches for a special fund to assist those recently released from incarceration get back on their feet, thanks to Pastor Laura Sinche,” Watson said. “Every year we are able to divert around three tons of surplus food, clothing and household goods from the landfill with this effort.”

Anybody can play a part in taking care of the environment, Watson said.

“You don’t have to be a science major to clean a stream, donate an extra meal or host a clothing drive,” she said. “We all live on the same planet, share the same air and we are all in this together, so let’s use our time wisely and make a difference.”