“Man, winning is fun,” Head Coach Rob Ambrose said. “I want to congratulate my guys. This is the time of year where it is truly is a grind where classes are harder and keeping up with classes and football is really difficult. We’re beat up, we’re tired, but we’ve found a way week after week to respond.”

“We just came to play today,” senior cornerback Donnell Lewis said. “Our coaches did a good job all week emphasizing how this game was going to be. We knew this was a rivalry game and we basically just wanted it more, even though Delaware was a good team.”

Lewis helped seal the game with a late fourth-quarter interception on Delaware’s last offensive possession. The interception was the second caused-turnover for Towson and the defense also finished with two sacks.

Offensively, the Tigers were led in scoring by senior kicker Sam Hurtwitz, who finished the game with four field goals.

Hurtwitz’s performance tied a school record and he has now made 12-of-13 field goals this season.

“It’s not just me, my guys around me make it really easy,” Hurwtitz said. “Delaware is a heck of a team in terms of blocking, so they definitely pushed up this week but our guys were able to come through.”

Towson’s lone touchdown came off a fourth-and-goal run from junior running back Darius Victor in the second quarter, which gave the team a 10-lead. However, Victor was limited to just three carries in the game due to injury and he missed the second half.

The injury opened up reps for sophomore running back Marquel Dickerson, who finished with 102 rushing yards off of 20 carries.

“He needs the reps and it’s a balancing act when one of your best offensive players doesn’t want to come off the field,” Ambrose said. “I don’t want to take Darius off the field but the more reps Marquel gets, you can see what the future is going to be. It’s not like we’re going to have a hole at tailback.”

Towson also opened up the passing game more and junior wide receiver Christian Summers finished the game with eight receptions for 133 yards, which were both career-highs.

Summers had three catches for 70 yards on the Tigers’ touchdown-drive in the second quarter. Two of his catches were off of jump-balls in one-on-one coverage.

“I just felt that we were on the same page today and he put the ball where it needed to be and I just made the play,” Summers said about his connection with Frazier.

The Tigers have moved up to fourth place in the CAA and have an away matchup against Maine (3-5, 3-2 CAA) on Saturday. Kick-off is at 7 p.m. 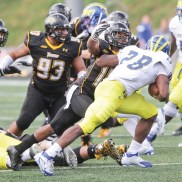 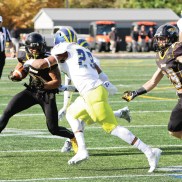 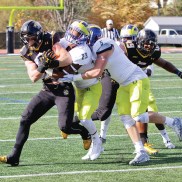 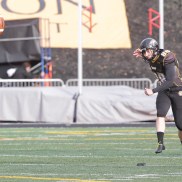 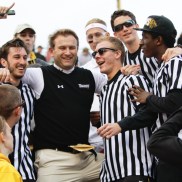 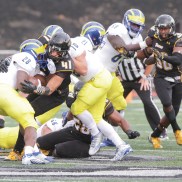 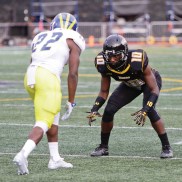 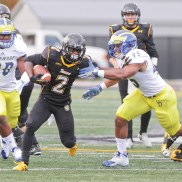