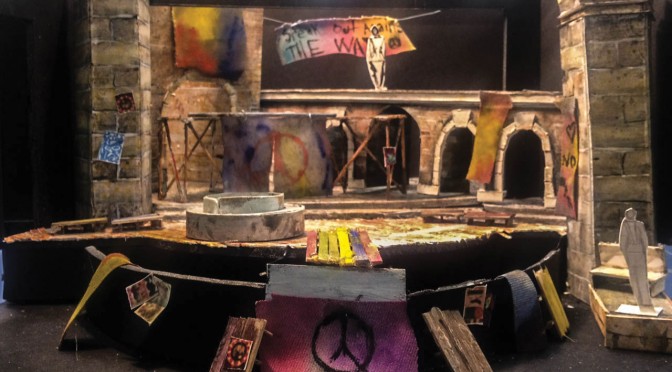 Set designer and theatre major Bridget Lindsay started painting sets in high school where she discovered a hidden talent for visual art in the theatre.

Suddenly placed in a world of set design, Lindsay was willing to try but was also, admittedly, terrified. Prior to participating in the theatre with sets, Lindsay had never focused on art as a passion. For her, theatre was the main goal, but the opportunity to merge color and visual art within the world of acting was refreshing.

After Lindsay painted her first set in high school, her director approached her and asked if she would become the assistant scenic designer for the upcoming shows. For the remaining productions, Lindsay would be the primary set designer. Because her introduction to set design was so brief, she had to teach herself many of the rules.

Since coming to Towson after high school, Lindsay has been involved in designing and painting sets for the student shows here.

Before planning the style and design of a set, Linsday spends a lot of time with the script before pursuing her vision.

“My process is when I take the script, I dissect the themes and the messages, and then I’m able to translate that to a set on stage that I want to use to invoke emotion to the audience–emotion that they’ve never felt before,” Lindsay said.

Scenic design, painting and acting have proven to be part of a path that Lindsay wishes to continue. After graduation, Lindsay hopes to go graduate school with a focus on scenic design, but has a plan to continue with a job if that doesn’t work out.

The studio production for Spring 2016, “The Good Person of Szechwan,” will run from March 31-April 9. “The Good Person of Szechwan,” written by Bertolt Brecht, a German theatre practitioner, is a parable set in the Chinese “city of Sichuan.” Towson’s version will be directed by Stephen Nuuns, an associate professor in the department. The play follows the story of a young prostitute who’s struggling to live a “good” life. At the end of the show, it is up to the audience to determine how a person who is good can live a good life in a world that is not “good.”

-Cody Boteler contributed to this article.