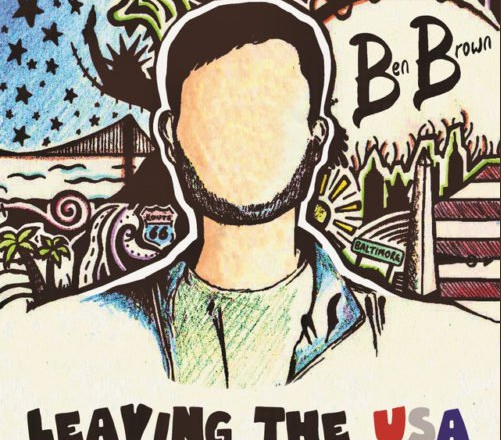 As a kid, Ben Brown used to carry around a plastic guitar with toy strings, pretending to play music. Now, Brown’s imaginative days have become a reality, with him recording his own music to perform in today’s sound-scene.

The 20-year-old musician from North London is on exchange at Towson University. Despite the change in scenery, Brown has worked on his music during his time in the states, honing his original sound while simultaneously creating a brand new one.

According to Brown, his “old style” is inspired by artists like Ed Sheeran and Zak Abel.

“Originally, it was Ed Sheeran and this very acoustic vibe I first went [for],” Brown said. “Then, as that’s gone on, I take a lot more inspiration from more upbeat dancing, so Stevie Wonder and stuff like that. I love jazz chords and stuff.”

Brown says his new style is closer to trap and rap music than the acoustic sounds he normally plays. His new song, “Leaving the USA,” came from the style, and is the first single to be released off one of his upcoming EP’s.

“I grew up and a lot of my friends listened to rap music,” Brown said. “So that’s where I sort of got that side from, unconsciously.”

Despite relating his songs to the sounds of popular genres today, the singer-songwriter doesn’t like to characterize his music, saying that describing music is like putting a label on it. He also tries to avoid discussing the meaning behind his songs, as he feels they are relatively straight forward.

“A lot of the time my lyrics are very descriptive anyways and it’s not too hard to read into it,” Brown said. “Especially the verses. I generally like to make it quite descriptive because that’s what keeps it interesting and catches people.”

Brown, who is signed to  Stride Records, has been working with Towson student and producer Matt Tasselmyer to create his new sound. Tasselmyer has encouraged Brown to work with premade tracks rather than stick to his normal writing practices.

“I’ve generally always started with a chord pattern that I like,” Brown said. “So I play around on the guitar and I find a chord progression that I  like, quickly record that so I don’t forget it , and then generally [work on] the vocals.”

Premade tracks are helpful for Brown because “when I can already hear what the finished product is, I can sort of make it fit.”

Brown started his pursuit of music at a young age, and toting around the plastic guitar his parents had given him was just the start. Brown played music throughout middle and high school, and was trained in classical piano.

“Eventually, I went to [a] university,” Brown said. “ At 18, I started doing the gig circuit around Leeds which is sort of my home. I started… getting paid for gigs, [while] at the same time, starting to record.”

Brown released his first song to SoundCloud when he was 18, which was when he got spotted by and signed to Stride Records. He was also offered the opportunity to record an EP with the label, on which three of the five songs have been released as singles.

Throughout his entire journey, his biggest supporters have been the people who raised him.

As for his music, Brown wants listeners to not only listen to his recorded material, but also to his live shows and videos, which he uploads to social media following major shows.

“I do music definitely for performance purposes,” Brown said. “I mean, I love recording. I could spend six hours in the studio and then feel fine, and it doesn’t feel like work, and I’d enjoy myself. I’d be very tired after but I [essentially] make music so that I can perform.”

Fans can expect to see an EP come from Brown’s work with Tasselmyer this summer, as well as the EP that he has recorded under Stride Records. Brown will has several live performances lined up for when he goes back home, including an appearance at Mutiny Festival on May 26.