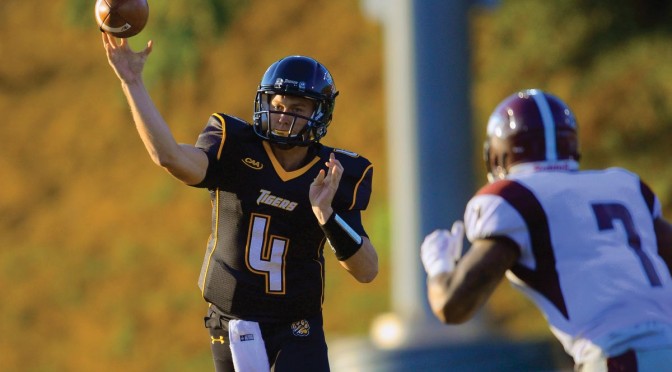 Prior to last season, the Tigers had lost many starters from the team that went to the 2013 FCS National Championship, including running back Terrance West and quarterback Peter Athens.

This year will be different though, as Towson has brought back experienced players, and is currently seeing a battle for the position of starting quarterback.

“It’s still a heated race and both of them run the offense pretty good,” Ambrose said. “We’re going to have some tough decisions to make down the road.”

Frazier was Towson’s starter last season and threw for 1,499 yards. He also threw nine touchdowns and eight interceptions, and rushed for 681 yards.

Knudson didn’t play last year because he redshirted, but the coaching staff has praised the way he has thrown the football in practice.

“Good things are building for us,” Victor said, after the team’s open practice on Burdick Field on August 26.

“We don’t want to let each other down. Each play, every second, every rep, we don’t want to have a bad play, but if we do then we want to come back strong the next play.”

Victor will likely be the bell cow for the Tigers’ offense and said he hopes to get more yards than he did last season.

The receiving core will look a little different for Towson, as last year’s leading receivers, Spencer Wilkins and Derrick Joseph, both graduated in the spring.

However, junior Andre Dessenberg will step up into a bigger role and Maryland junior transfer Jacquille Veii could start as well.

Towson will also have redshirt senior Brian Dowling back, who missed all of last season due to injury.

Defensively, The Tigers lost a few starters, including Tye Smith and Ryan Delaire, but still have a strong core of players returning.

Redshirt sophomore linebacker James Simms will lead the Tigers’ linebacking core, as he led the team with 99 tackles last season.

The team was hoping to get redshirt junior linebacker Bryton Barr back for this season after he battled injuries the last few years, but a knee injury has this season in doubt again.

The defensive line will be manned down by redshirt seniors Jon Desir and Tungie Coker.

The two players combined for 91 tackles last year and will be a fixture at the defensive tackle positions.

The secondary has senior safety Donnell Lewis, who was a Second Team All-CAA selection last year. Lewis finished with 85 tackles and will look to lead a secondary group that gave up an average of 196.2 passing yards per game last season.

Overall, Coach Ambrose is hoping to lead the 2015 Tigers to an exciting year of football.

“We’re always taking this one game at a time,” Ambrose said. “It’s kind of like being on the highway from an exit ramp. If you’re looking at the highway and not the car in front of you, then you’re likely to have an accident. We keep our focus where it should be; it’s one play at a time and one quarter at a time and we don’t look much further than that.”

The Tigers open up this season in an away game against the East Carolina Pirates on Sept. 5 at 6 p.m.

“They lost a lot of guys, but they’re pretty fast and they flow well,” Victor said about the Pirates. “We can use that to our advantage with the cutbacks though. It’s going to be a battle and it’s going to be a competition.”

Towson will then open up at home against the Saint Francis Red Flash on Sept. 12 at 6 p.m.

Both games will show just which way Towson’s football program will trend this year, as it looks to rebound from its 2014 season.