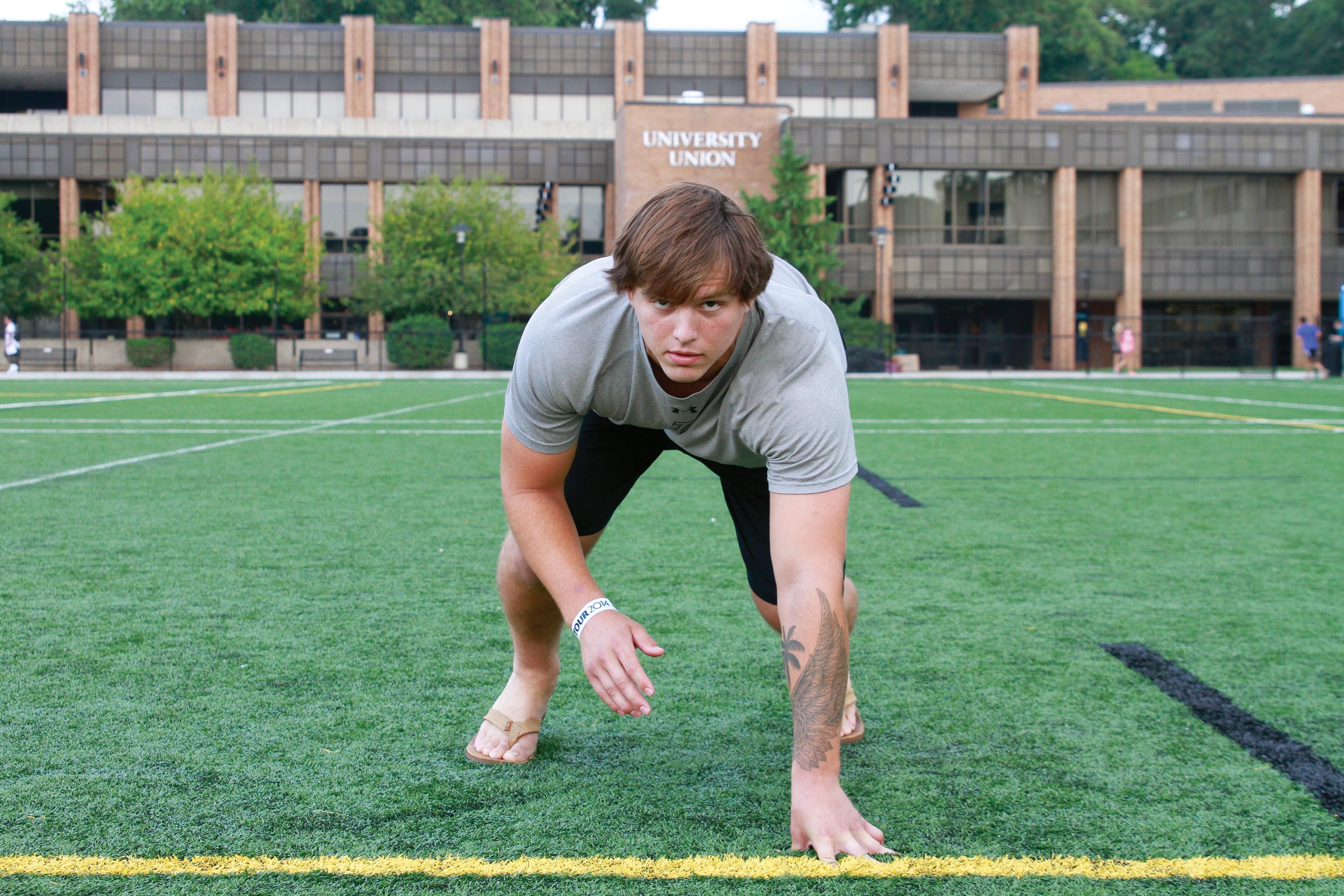 With 8 a.m. classes, daily team meetings and practices, and games every weekend, senior Ean Katz’s life is that of a typical college athlete.

“Football and school pretty much consume my life,” he said of his busy fall schedule.

However, the road Katz took to get to Towson was anything but conventional, as he has had to fight for the past four years against the most challenging opponent of all: his own body.

After recovering from a ruptured appendix in the fall of his senior year of high school, Katz has continued to fight, first against kidney failure the following spring, and then again in the spring of 2014 when he was diagnosed with Hodgkins Lymphoma. But now as he enters the 2015 season as a third-string defensive tackle for Towson, he couldn’t be more ready to get back on the field.

“I have been playing football since I was seven, and my dad coached me a long time throughout that, I mean pretty much he coached me until high school, so having my dad always right there pushing me in football that definitely provided a basis of how I feel today about football and life,” Katz said.

Katz is a driven individual, and said that he was “over-competitive” as a kid, always pushing himself to be better.

This level of determination is part of what Katz said helped him to push through the many months he had to spend in treatment and recovery. After his appendix ruptured in the fall 2011, he was ready to graduate and move onto college when a sudden complication arose.

“I remember I was sitting in the senior cafeteria, and I came in that morning and my hands were pretty swollen, my face was pretty swollen. I was gaining weight really rapidly,” Katz said. “My whole body was swelling up, I remember I could poke my leg and it would be indented pretty bad.”

He was diagnosed with nephritic syndrome – a kidney complication –  and went to Johns Hopkins Hospital for treatment, all while trying to finish his senior year. For five months Katz recovered, unable to attend school because the medicine he was taking made it too difficult to focus, and too sick to get out of bed on most days.

What helped Katz push through that time was the offer of a preferred walk-on spot on the University of Maryland’s football team for the fall.

“I just felt so bad going through all that I just kept my eyes on Maryland football,” he said.

When he arrived for summer workouts in mid-June, he was 20 pounds lighter than he had been last season, playing with other nationally ranked athletes like Stefon Diggs and Wes Brown. Katz said that he held himself to high standards, and did his best during the summer. He wasn’t as good as he had hoped to be, but he was able to “hang in with everybody.” That was, until they put pads on.

“I didn’t really excel, even to my own standards I didn’t think I was doing what I wanted,” he said.

About two weeks into summer camp Katz decided to leave, and redshirt for the season. He bounced around briefly, first attending Community College of Baltimore County at Essex in the spring of 2013, then moving to Los Angeles Pierce College (LAPC) in California where he was able to return to the field and play junior college football.

When he returned home that spring to attend Howard Community College, he came back with a bad cough that had started during his season at LA Pierce. His parents pushed him to get checked out, despite Katz’s resistance to do so.

“I had bigger dreams than figuring out why I was sick,” Katz said. “I figured I would take care of it later because I was playing football.”

When the doctors did a CAT scan, they found that the source the breathing problem was a tumor pressing on his airways. When his father explained to him what that meant, Katz said he didn’t understand his diagnosis at first.

“But he kind of sat me down and explained it, and I just couldn’t believe it,” Katz said. “I never knew anybody that had gone through that kind of stuff so I mean, in the ‘Howard County bubble’ that just doesn’t really happen.”

Although he struggled with the news at first, Katz said, by the second day he realized what he had to do to make the best out of the situation.

“I try to be positive as much as I can, and if I can control something that’s when I’ll freak out about it, but if I can’t control it I mean all I can do is be positive,” Katz said. “And being positive it helped a lot of other people, my family, people that knew about it. If you see me happy, and I’m going through it, generally it will keep them calm, keep them happy, and that’s what I was kind of interested in for the most part.”

In fact not many of Katz’s friends did know about his diagnosis while he was undergoing radiation and chemotherapy treatments at Hopkins Hospital.

“I’m not really a public person I guess, I didn’t tell a single person about what was going on,” Katz said. “I just hate pity, it disgusts me … I knew I was going to be fine, I didn’t doubt my own self-discipline in getting through it.”

By the time he had finished his treatments, and began to tell his friends about what he had been going through, he said that many were shocked to hear his story.

“Some people, it freaked them out, that c-word just freaks people out I hate it, I hate the c-word,” Katz said. “[I got] All kind of reactions, whatever you can imagine I kind of got it. But it was nice to get that after I was done, rather than during.”

As he pushed through recovery, and began working to regain his strength and the 20-30 pounds he had lost during treatment, Katz began classes at Towson in fall 2014 and joined the football team but decided to redshirt.

Similar to the start of his career at Maryland, Katz came to Towson in a state of recovery. Yet his experience with the team, he said, was completely different.

At Maryland, he said that he felt more as though the program saw him as an investment, rather than a person. When he knew that he couldn’t perform as they expected, and that Maryland was not interested in helping him get back to where they wanted him, he knew it wasn’t the place for him.

“When I got here [to Towson] I still had some medical issues, and they knew that and I knew that,” Katz said. “But they were willing to work with me until I was where I wanted and I was where they wanted, and they didn’t just give up on me when they thought I wasn’t going to be able to provide them with anything.”

He said that the team immediately welcomed him like a family, and that the coaches were more welcoming than those at Maryland. Although he played middle linebacker in high school, and outside linebacker for junior college, this season he was moved to defensive tackle.

“I was happy to help the team,” Katz said. “I probably won’t get as much playing time in this situation but, I mean, I am pretty much here to do what I need to do for the greater cause.”

After everything he has been through, it is Katz’s fierce and resilient personality that has kept him pushing through the most difficult times in his life.

“If I didn’t play sports I would be a different person,” he said. “I would be okay with mediocrity and I wouldn’t be a very competitive person, I wouldn’t want to be better than somebody else and I would stray away from confrontation.”