Now that I’m beginning my final semester at Towson, I’m starting to do some introspective thinking.

I’d describe myself as an introverted extrovert. I really don’t like putting myself into new social situations, because I get far too awkward for my own good, and I’d much rather hear about other people’s lives than talk about my own to my friends.

I like to talk with my friends to try to help solve their problems or work them through whatever might be going on in their lives, but will do anything to distract my mind from actually thinking about myself.

Still, when I was having a “real life” conversation this weekend with former Towerlight senior editor Megan Flannery, she and I were joking how I will basically never come full circle in my Towson career, which forced me to do some thinking about my priorities for my final semester.

Then, I came to the conclusion that I will basically do about 25 percent of what the average Towson student does in four years.

Since my very first day on campus, I’ve been in The Towerlight office (but more on that in my eventual senior editorial). Long story short, about half of my collegiate career has been spent doing Towerlight stuff.

Add that onto the sports writing positions that I hold elsewhere, and I honestly have about 18 hours per week that I literally can do whatever I want.

Most weeks, I spend that time cooking (which is basically the only thing that relaxes me), playing video games, (more recently) jogging as part of an effort to change my diet and overall lifestyle, watching sports or watching Netflix.

Hardly any of that time is spent doing anything that I would describe as “so college.”

With just about four months left at Towson, here’s a definitive ranking of things that I have never done (and will likely never do) that 95 percent of other Towson students have probably done.

1. Go to the B-Lounge. I have no idea what the B-Lounge is or where it is, but past Towerlight editors have informed me it has quite a history. When I go out, it’s Turtle, CVP or nothing.

2. Take the shuttle during peak hours. I have literally only used the shuttles on campus once in seven semesters, and it was in the fall when my car was being worked on for a few days, and the shuttle I took picked me up at 7 a.m. I’ve never had the pleasure of dealing with overcrowding on a shuttle bus, or relying on the shuttle to get me to class on time (and likely failing).

3. Go to Favorites/Craig’s. Like B-Lounge, I have no idea what this place even is or where it’s located. But judging by what Towson and Loyola students were saying on Twitter when it was announced Craig’s would be closed immediately due to liquor license violations, it seems like I missed out on drunk people falling down stairs and consuming Natty Boh in a small, slimy space. Too bad.

4. Go to a tailgate before a Towson football game. The ship has already sailed on this one. It ain’t happening. Prior to last semester, The Towerlight printed on Mondays and Thursdays, which meant I really only had one day to my weekend: Saturday. There was no way I was ever going to sacrifice some serious Netflix or grocery shopping time to go hang out with every sorority and fraternity member on Towson’s campus in a parking lot for 90 minutes before the football game started.

5. Eat at Pizan’s after midnight. Every year, Pizan’s wins our Towson’s Best category for “Best Late Night Eats.” But when you never go uptown, it’s tough to be near Pizan’s and be hungry that late at night. If it’s after midnight and I’ve already had too much to drink, you better believe I’m going to IHOP, because it’s within walking distance of my apartment and Cinnastack pancakes are one of the single greatest foods to ever be served in a dining establishment.

7. Dance at Dicky’s. A friend of mine always went to Dicky’s to dance, and would always be stoked on the fact that guys could stand on/near a wall in that bar and wait for girls to just come up to you and start dancing on you. That sounds gross and degrading all at the same time, but somehow, the bar won our “Best Dance Spot” award for the second year in a row. It’s safe to say I’ll contain my dancing to my friends’ apartment, and exclusively for when “Uptown Funk” is played. 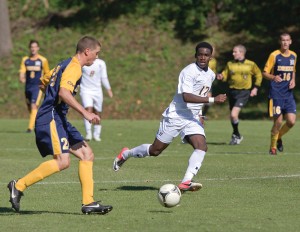