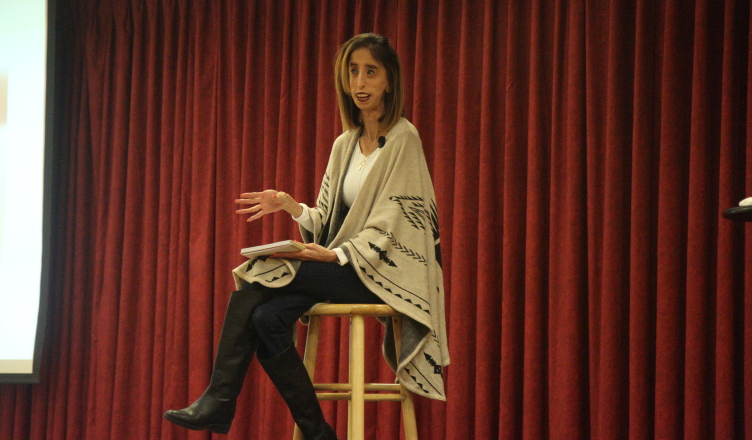 Motivational speaker Lizzie Velasquez was born with a form of neonatal progeroid syndrome that affects her eyes, bones and heart, and lipodystrophy, which means her body can’t store fat. In other words, at 28 years old, she’s never weighed more than 64 pounds. She lacks the facial fat required for full cheeks and conventionally beautiful features, and she’s been mercilessly bullied for it.

When she was 17, she found a video on YouTube titled “the ugliest woman in the world” – it was eight seconds long, just a still shot of her face. It had four million views and thousands of comments.

“At any moment, my heart could dilate and burst,” she said. “I encourage you to set your sights as high as you can. We have the ability, no matter the disability. You will be amazed by all the mountains you can move.”

Velasquez, the subject of 2015 documentary “A Brave Heart,” touched on this strength, as well as the importance of self-confidence and positivity, during an on-campus talk in the in University Union’s Chesapeake Ballrooms March 30.

“I don’t want people to feel sorry for me,” she said. “Yes, this is hard, but someone else out there is having a way worse day than I am.”

Velasquez’s parents dealt with people treating her differently by facing the problem head-on. During her elementary and middle school years, Velasquez’s father worked at the school and introduced her to the class on the first day of school while explaining her condition.

One day, when she was going to see a movie with her parents, there was a group of teenagers standing off to the side, laughing at her. Velasquez describes how her father went over to them, explained her condition to them, and said, “Whatever you’re going through, we’ll pray for you.”

“I credit the way I handle things to my parents,” Velasquez said. She called for society to have compassion for the bully as well as the victim, because “hurt people, hurt people.”

“When people are bullying, they’re doing it possibly for a reason in their own life that might mean they have something that is going on that people should look out for and care about.” mass communications professor and disability media specialist Beth Haller said.

“Dare to Be Kind,” Velasquez’s upcoming book about “how extraordinary compassion can transform our world,”  is due to be published in June.

“I really feel like I’ve stepped into my own over the last two years. I felt like it’s important to share those lessons and ups and downs I’ve gone through, especially because I feel like my audience has grown with me,” she said. “They’re not all 17 or 15, like I was when I started, and I don’t want to keep talking about things like that. I wanted to be able to be really raw in this one, even though it was really scary.

Alexandra Toribio, a senior mass communication major, had seen Velasquez’s documentary prior to the talk.

“It’s nice to see someone in person versus someone online,” she said. “Even though she’s a celebrity, she’s still a normal, nervous, human being like the rest of us, who has passions and desires and worries, and it’s nice to know that we can aspire to be like her one day.”

“I really liked her talk,” Zaks said. “I think she speaks to the heart of what I teach, which is that we’re all different, and it’s actually partially the being nice and being kind part, but it’s also when we exclude people because of their diversities, we miss out.”

Junior graphic design major Kaylee Davis said that overcoming this kind of exclusion is already something she thinks about a lot.

“People can tell you you can’t do things, but that doesn’t mean you can’t do it,” Davis said. “You can literally do anything. It’s just a matter of putting your mind to it and working hard at it. Things don’t just come to you. You’ve got to work for them.”

“As someone who has physical disabilities,” Davis said, “I really resonated with a lot of what she talked about, with the bullying and with focusing on the ‘ability,’ not the ‘dis’ part of the disability. It was kind of just like hearing myself talk up there, because a lot of what she said was something I think about all the time.”

Velasquez credits everyday people as being her inspiration. She gets tons of comments and emails from people around the world who have applied her philosophy of confidence and compassion to their own lives.

“I think that’s really what keeps me going. It’s just that extra motivation that I need, personally, because oftentimes I’m giving it out, and there are times when I need the inspiration myself,” she said. “To be able to have that whenever I need it has helped a lot.”

Velasquez was first asked to give a speech about her condition during high school. She was nervous, but she realized she and her audience could relate to each other, because wants to be accepted. She realized motivational speaking was something she just needed to pursue.

“It’s hard to call it work because I’m living my dream,” Velasquez said.

“I, a girl from Austin who was once told to put a gun to her head and take herself out of this world, can do all this,” she said. “Be the best version of yourself, because the world is waiting to see it.”