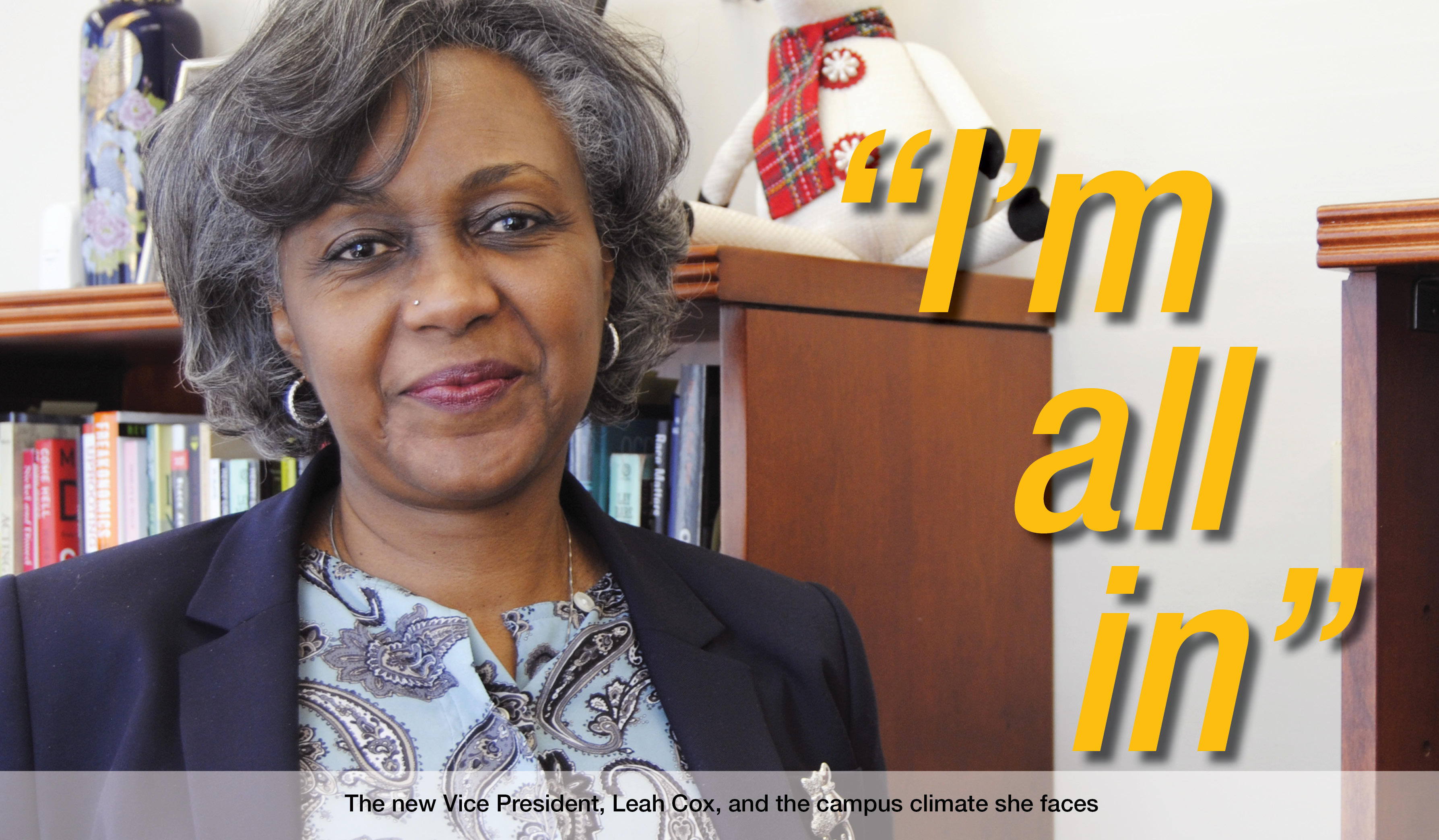 According to the latest publicly available data, 4,047 of the 22,343 students at Towson University during the Fall 2016 term were African-American or Black. That’s a little over 18 percent.

During that same time, 28 of the 597 tenure or tenure-track faculty at Towson were African-American or Black. That’s a little under 5 percent.

“I know there’s a big need for more faculty and staff of color,” the inaugural Vice President of Inclusion and Institutional Equity Leah Cox said. “That’s obvious, looking at the stats and the data. It’s a little bit shocking and sad.”

But, she added, “It’s nice to see that the numbers of students of color have jumped.”

President Kim Schatzel formally announced that the search for a vice president for the Office of Inclusion and Institutional Equity was one of her priorities in April 2016. In December, University administrators named Cox to position, following a prolonged search and screening process, in December, and she started working at Towson Jan. 23.

Tension and focus on race and diversity issues at Towson University first came to a head in November 2015, when a group of students occupied the Office of the President in the Administration Building and presented a list of demands.

Cox said that holding the vice president position, a first at TU, is “a little scary.”

“To be the first is always cool, because you can set your own agenda,” she said. “You get to forge out there and do stuff that nobody’s done. But, you know, you want to get it right.”

“When you walk down the street, on one of the corners of the sidewalk, they have preserved a slave block,” Cox said. “And I’m like, ‘Can you pull that thing down, please?’”

The biggest difference between TU and Mary Washington, Cox said, is that she no longer feels like she has to fight against the tide.

“Just meeting with the number of people who were so excited,” Cox said. “And knowing that it’s coming from the top down is even better,” she added, referring to Schatzel’s repeatedly-stated commitment to diversity and inclusion.

In an email, Santiago Solis, associate vice president for student affairs and diversity, said that he has invited Cox to tour the Center for Student Diversity to help her meet with students.

“I look forward to partnering with Dr. Cox on various exciting projects and initiatives around diversity, inclusion, and social justice,” Solis wrote.

Breya Johnson, a member of the Organized Network of Student Resistance and an assistant director in the Student Government Association, said she hasn’t been able to meet with Cox one-on-one yet.

But, Johnson said, she had a pretty good impression.

“I don’t think that she is going to be a yes-man,” Johnson said.

Johnson added that she was concerned that Cox might become the only person on campus who focuses on diversity and inclusion issues, instead of a resource to develop institution-wide change.

“I want her opinions and suggestions to be taken seriously,” Johnson said. “I’m very eager to see what happens next.”

To that effect, Schatzel said in her spring address that Cox’s position would be one that will “provide senior leadership” to design and deliver “diversity, inclusion and cultural competency efforts” to all of campus.

And, if Cox’s own efforts go as she’s already planning, Johnson’s concerns may be allayed.

“It can’t be just me, it’s got to be everybody,” Cox said. “I do not want to just be hired because I’m a black woman. There’s more to me. I’m here to work. I really want to work.”

Part of that work, for Cox, will be engaging the campus in different education and training programs. She said she wants to begin with Schatzel and other members of senior leadership, then move to the deans, then to faculty and staff, and then to students.

To start, Cox said she’d be talking to “a bunch of people.”

“I don’t want people to feel like, ‘Oh we’ve already done that,” she said, referring to any certain types of training or education. “I want to make sure we get it right.”

Though, she said, she’s expecting and ready to deal with some resistance.

Some of that pushback could bubble up during the next University Senate meeting, scheduled for Feb. 6.

Richard Vatz, an at-large member of the University Senate, said he interviewed candidates for Cox’s job. He said that Cox was “completely without doubt” that she’d bring training or education programs to the faculty.

“A lot of us believe that is an abridgement of academic freedom,” Vatz said.

Vatz said it’s “absolutely absurd” that such a small percentage of the faculty at a metropolitan university, like Towson, is made up of minorities. But, he said, the concept of academic freedom at a university means that people have a right to disagree.

“You don’t train people to have certain positions,” Vatz said. He particularly objected to any sort of test or assessment that could hypothetically be delivered to faculty after a training session.

If a majority of his colleagues in the senate agree, Vatz said, they could pass a sense of the senate resolution that would inform Cox of their objection to any mandatory training or testing of faculty that was not mandated from the federal government.

Among other decorations scattered in her newly-moved-into office, Cox has a framed “Sports Illustrated” magazine cover, displaying, in bright lettering, “TITLE IX,” the federal statute that forbids discrimination based on sex from “any education program or activity receiving Federal financial assistance.”

Since its implementation, discrimination under Title IX has been interpreted to include sexual violence and harassment.

And, even though there’s uncertainty about how President Donald Trump’s Department of Education might handle Title IX investigations, Cox said she’s prepared–and not going to stop working to help students.

“My thought is that even if there isn’t a federal guideline for us to follow that as administrators and individuals in higher ed, that we still need to be concerned about sexual assault and rape. So as a university, we still need to be on top of it,” Cox said. “I’m all in. My staff is training in a Title IX conference this week. I want to make sure that they’ve got it right.”

Towson has a webpage for reporting incidents. According to the Chronicle of Higher Education, there are no Title IX incidents at Towson that are being investigated by federal authorities.

Even though Cox knows the conversations about diversity and inclusion will start with race (“I walk into a room and you see that I’m black, I see that you’re white,” she said), she doesn’t want them to end there.

Cox wants to get to work on a myriad of issues concerning diversity and inclusion–Title IX, compliance with the Americans with Disabilities Act, and staying on top of the Trump administration’s actions on DACA, for example.

She said she also wants to look at the types of courses being offered on campus, to work on making sure courses “actually offer a diverse point of view.”

Cox said she’s not on campus just to be a token. She showed that she’s ready to get to work on making sure campus is an inclusive space for everyone.