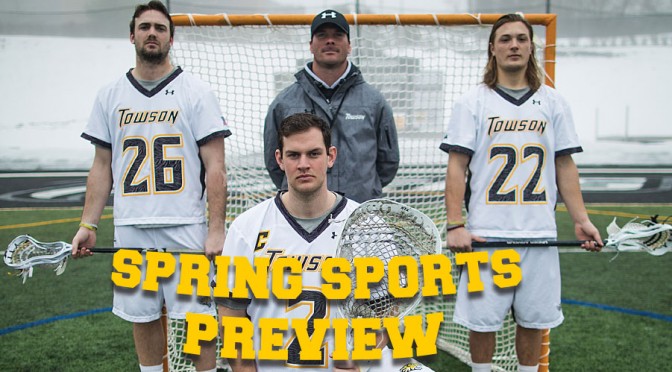 The Towerlight has compiled below previews of the upcoming Towson lacrosse, tennis, golf and baseball seasons.

The Towson Tigers opened the 2016 season with a 14-2 win against the Mercer Bears Friday night at Johnny Unitas Stadium.

The game was originally scheduled for Saturday, but both coaches agreed to move the game up to Friday due to weather conditions.

“I’m excited and happy to earn our first win to start the 2016 season,” Head Coach Shawn Nadelen said. “I thought our guys did a great job all week preparing for someone we didn’t know a ton about. As far as team effort on the field today, and getting out there in the right mindset, and great energy and executing, I thought for the most part from start to finish was an exciting thing to see from our squad.”

Nadelen has been the head coach for the Tigers since 2013 and is coming off his second CAA Championship as coach.

Parks transferred from the University of North Carolina last season and finished with 16 goals and 15 assists in his first year with the Tigers.

“I think Coach [Nadelen] kind of expects not to feel pressure,” Seider said about the other top lacrosse schools in Maryland. “We don’t really look at the standings or care what rank we get. We’re just trying to play how we know we can play and what we expect.”

Seider opened the game against Mercer with a goal in the first minute and scored his second goal in the last minute of the first quarter, which gave the Tigers a 4-0 lead.

Towson held Mercer without a shot in the first quarter, which was credited to a defense that lost Honorable Mention USILA All-American JoJo Ostrander to graduation last season.

Redshirt freshman attackman Ian Kirby scored a goal in the first minute of the second quarter and was assisted by junior attackman Ryan Drenner. Drenner led the team with 17 assists last season and also scored 17 goals.

“We pretty much take every game like it’s the championship game,” Drenner said. “We’re out there trying our best and putting everything out on the field.”

Mercer scored its first goal in the second quarter, but it was the only goal redshirt senior goalie Tyler White gave up.

The Tigers finished the second half with four more goals, including a goal from redshirt freshman attackman Dylan Kinnear. Kinnear transferred from Ohio St. last season and will come in off the bench this year.

Towson’s next game is another home matchup against Mount Saint Mary’s Saturday at 2 p.m. It’s the start of a season in which Coach Nadelen and Tigers look to capture the CAA Championship again.

“We put a lot of pressure on ourselves in practice to perform at a high level,” Nadelen said. “We think being able to do that as a group with our athleticism and talent should put us in a good position to go far during the season and we just have to continue to work at that.”

Towson began its 2016 season with a 2-0 record after defeating Jacksonville State and Monmouth—one year after falling to James Madison in the Colonial Athletic Association (CAA) Championship tournament.

“We’re off to a great start,” Head Coach Sonia LaMonica said. “There is still a lot of work to be done, but we’re on the right path and should have a great season ahead.”

Towson earned its second straight win with a victory in overtime on the road against Jacksonville State Saturday.

The Tigers jumped out to an early 2-0 lead over the Dolphins on a pair of goals from freshman attacker Carly Tellekamp. Later in the half, Jacksonville State tied the game 2-2 and took brief 3-2 lead over Towson on a goal from sophomore attacker Danielle Dellarocca.

Towson responded as both teams traded goals throughout the rest of the first half and the first 30 minutes ended with the Tigers leading the Dolphins 7-6.

In the second half, Towson struck first, extending its lead to 8-6.

Jacksonville State promptly responded with three unanswered goals to take a 9-8 lead, but a goal from Towson sophomore midfielder Emily Gillingham tied the game 9-9 and forced overtime where Tellekamp netted the game-winning goal.

“I think that we’re getting better with each game,” LaMonica said. “I thought that we had good improvement from the prior game. I thought we managed to pull it out and escape Jacksonville State with a good win.”

Towson defeated Monmouth 9-1 at Johnny Unitas Stadium on Wednesday. Gillingham struck first for Towson to give the team a 1-0 lead. Sophomore attacker Jenna Kerr followed to extend Towson’s lead to 2-0.

“Emily still has a lot to come as she continues to develop,” LaMonica said. “But she has all the attributes to be a really deadly weapon for us.”

Later, Monmouth cut Towson’s lead to one on a goal from freshman Kate Ryan, but the Tigers went on to score three unanswered goals and take a 5-1 lead into the half.

The Tigers continued their offensive attack in the second half, scoring four unanswered goals to secure their first victory of the season. Looking ahead to the rest of the Tigers 2016 schedule, the team will take on local rivals UMBC, Loyola and Johns Hopkins before hitting the brink of CAA play.

In CAA play, Towson will host Delaware, William & Mary and James Madison at Johnny Unitas Stadium while traveling to take on Elon, Hofstra and Drexel.

Although Towson is coping with loss of seniors Andi Raymond, Michelle Dufault and Kelsea Donnelly, the team is returning seven starters in search of its sixth straight CAA Championship game.

The Towson baseball team is looking forward to getting the 2016 season underway.

The men are anxious to get out on the field as they look to improve after going 17-35-2 overall a season ago and 9-15-0 respectively, in Colonial Athletic Association games.

“I don’t point to a particular spot in the standings but I really like our position,” Head Coach Mike Gottlieb said. “Our players are really young and they have a chance to be really good.”

Gottlieb is entering his 28th season as Towson’s head coach and is tasked with a unique job this year. He intends on playing a lot of his young players, something that isn’t customary.

“They’ve never played college ball,” Gottlieb said. “I like what they could do.”

Although the youth on the team may be evident this season with 11 freshmen and nine sophomores accounting for more than half the team, returning junior and senior Tigers look to lead the team.

“Returning Brady Policelli is a talented kid,” Gottlieb said. “He could have a breakout year.”

Junior Policelli is coming off a season during which he played a team high 54 games. He finished the year hitting .250 with 11 doubles, a team-high eight home runs and 35 RBIs. The team will rely on Policelli to be one of their more reliable experienced players this season.

Redshirt Junior Chris Henze was recently selected to the 2016 Preseason All-CAA First Team. Henze looks to build off of an impressive 2015 campaign that saw him lead Towson hitting a team-high .331 with five home runs. He was also named the First Team All-CAA designated hitter.

Sophomore outfielder Mark Grunberg received recognition as well because he was selected as an honorable mention for the 2016 Preseason All-CAA First Team. Grunberg will look to carry his momentum from an outstanding rookie season.

With a wealth of talent on this team, the offseason training was approached a little differently this time for the Tigers.

“We put in place a different training regiment for pitchers,” Gottlieb said. “It’s something we’ve never done before.”

The start of a new season is fast approaching and the Tigers will continue to prepare as they look to start off the upcoming season with a road victory in their 2016 opener at New Mexico State Feb. 19-21.

Women’s golf Head Coach Kate Schanuel has high hopes for the nine women on her team in the upcoming season.

Schanuel loves being around the team and helping them improve every season, and believes they will have a successful finish to this season thanks to the strong platform of the program.

“I’m looking forward to the freshman stepping up to compliment the seniors,” Schanuel said.

The same expectations as last season are expected for Schanuel’s returning members. She expects to see leadership on and off the golf course, and positive support for the new members on the team. Schanuel also likes her returning members to show what it’s like to be a leader on her team, so the new members know what to expect when it is their turn to fill their shoes.

“I have a great group of seniors,” Schanuel said. “They are the best players on the team that are dedicated to improving this program.”

Freshman members of the team have earned their spots by practicing their technique and golf skills over the summer.

“They came ready to play in the starting lineup,” Schanuel said. “They’re able to manage themselves on the golf course, and have an innate mindset of being ahead of the game and working hard to better their program.”

Tournaments are a keen part of the season according to Schanuel. The team participates in four major tournaments under the Ladies Professional Golf Association (LPGA). They compete against international teams, so their main focus is being better than their biggest competition, other CAA schools. Schanuel believes that her team is going to have an up and coming program this semester.

“We keep getting better,” Schanuel said. “It’s been fun to be a part of the ride.”

Head Coach Brian Yaniger, who is entering his 18th season with the Tigers, leads the men’s golf team.

Yaniger was not available for comment in time for The Towerlight’s print deadline.

The team will be returning eight upperclassmen including seniors Alex Church, Cas Dickerson and Ryan Siegler.

The Tigers will officially tee off their 2016 season at the Gary Freeman Invitational on March 3 in Daytona Beach, Florida. Other notable tournaments for Towson include the Kingsmill Intercollegiate, the Towson Spring Invitational and the Greenbrier Invitational.

The Tigers will conclude their 2016 campaign at the CAA Championships in Southport, North Carolina in April.

The tennis team comes into this spring with a strong, determined squad of players, and a brand-new outdoor tennis facility to call home.

“We want to do better than last year in our conference,” Neagle said. “We lost in our first round in the conference championship.”

The Tigers have a 4-2 record so far this year, their most recent match being a hard-fought 4-3 win over George Washington last Friday night at the Bare Hills Racquet and Fitness Club in Baltimore.

“We’ve never beaten them while I’ve been here as coach, and maybe in the whole program,” Neagle said. “I hope [the Tigers] start believing in themselves now.”

After losing their second match of the season 1-6 to James Madison Jan. 31, the team has found a new wave of confidence, winning three out of their last four matches.

“They wanted to work harder, and they’ve stepped it up ever since,” Neagle said.

The Tigers have a solid roster of players this season, including sophomore captain Lucy Williams, sophomore Barbora Vasilkova and freshman Lucy Gloninger, who have all shown early promise so far in 2016.

Towson’s tennis courts underwent renovations last fall, which forced the Tigers to hold practices and home matches away from campus at Loyola Blakefield and Goucher. The team will have its first match on the newly renovated courts March 9, as they take on Morgan State.

During the colder months, the team practices and plays indoors, which is very different from playing outdoors. This makes the transition between indoor and outdoor during the spring particularly difficult.

“It’s tough, having to deal with the elements—the sun, the wind, picking up vision of the ball,” Neagle said. “And it’s still cold in March.”

The Tigers’ next match is at home versus Mount St. Mary’s Friday.