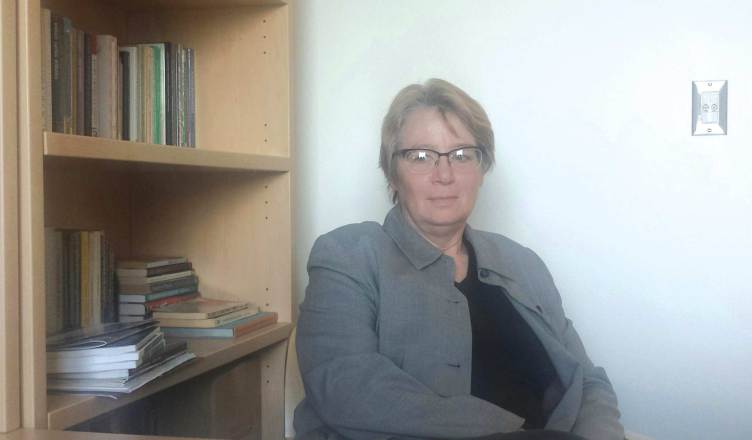 Leslie Harrison, Towson University professor and widely published author, was chosen as a semifinalist for the 2017 National Book Award for poetry.

“The Book Of Endings,” her second poetry collection, was chosen as a top-10 finalist out of 250 entries.

Harrison’s work has been widely published in journals like FIELD, the Kenyon Review, The New Republic and Memorious. Her first book, “Displacement,” won the 2008 Katharine Bakeless Nason Prize in poetry.

The Towerlight sat down to chat with her about her writing process, awards and being a semifinalist.

What did you write and what is it about?

It’s called “The Book of Endings,” and it’s kind of about me reckoning with absence, which is to say it’s about my mother’s death and about other losses like that.

What made you decide to write about that?

The National Book Foundation sent me two questions, and one of the questions was, “What’s your favorite bookstore?” and, well, that’s easy. The other [question] was, “Why did you write this book?” and I don’t know. I wrote this book because I wrote this book. I just started writing and I had been writing these poems for several years before I realized what I was really writing about.

How is it similar and different to what you’ve written in the past?

Why didn’t you put any punctuation in the book?

[The poems] didn’t want any.

What was your reaction when you were awarded?

I burst into tears. It’s a huge honor. They looked at hundreds of books and they picked 10 from the long list. I couldn’t in my wildest dreams have imagined that mine was going to be be one of them. So I was really stunned.

Do you have any plans for future work or contests?

I’m working on my third book.

And what is that one going to be about?

I don’t know, but it seems to want to be about shipwrecks.

Robert Frost very famously said, “No tears for the writer, no tears for the reader. No surprise for the writer, no surprise for the reader,” and so I’m always trying to write into what I don’t know or don’t understand. So, for example, there are a lot of horses in “The Book of Endings” and I still don’t know why. I’m really interested in the ocean and shipwrecks lately, and I don’t know why yet, but I’ve got about eight new poems that are all titled some version of shipwreck.

How did The Book of Endings come together?

It’s hard. I had a bunch of poems and I couldn’t figure out how they fit together, like the order of the book. I kept sending it out to open reading periods and book contests where it would get a finalist slot, or a semifinalist or it wouldn’t do anything and I knew it was because I hadn’t figured the book out yet. And the one day this weird confluence of things made me realize the shape of the book. It’s a triptych – it’s three parts, like early Christian altarpieces. There’s a right panel, a left panel and a center panel. That’s how the book is ordered. There are three sections, the first one is called left panel, the second is right panel and the last is center panel which, in art, is always the most important. Once I figured that out, the book got taken by Akron almost immediately. When it got taken it was called “Triptych,” but then I thought it was stupid to call your book by its structure. Maybe not stupid, but it didn’t seem like a really good idea. Then the title just came to me and I emailed my editor and I said, “How is this for a title?” She said, “It gave me goosebumps.”