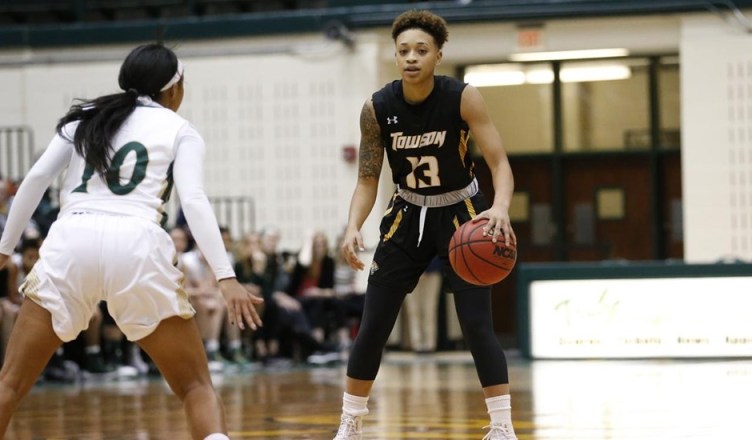 Towson women’s basketball picked up a convincing road win against College of Charleston on Jan. 21 after failing to complete a comeback victory against Elon Jan. 19.

The Tigers managed to stay in the game by outworking the Cougars on the boards and playing physical defense.

Senior forward Mary Cuevas and senior guard Raine Bankston had strong performances in the second quarter to help the Tigers build up a lead.

The Cougars came alive in the third quarter, cutting the deficit to three near the end of the period,  but the Tigers countered with an 8-2 run to take a double-digit lead going into the fourth.

The Tigers kept the pressure on in the final quarter and never let the Cougars back in the game, sealing the conference road win.

“Teamwork and being more team oriented,” Head Coach Diane Richardson said on what Towson improved on from Friday’s loss to Elon. “We watched film as a team and showed the girls where we could get better, and they came out against Charleston and played much better.”

The Phoenix started off hot as they went on a 9-2 run in the final minutes of the first quarter, and prevented the Tigers from regaining any momentum.

“We need to play defense,” Richardson said. “We need to defend as a team and show fight for all four quarters to show consistency.”

Junior guard Danielle Durjan and sophomore guard Etalyia Vogt provided enough scoring to keep Towson in the game, but ultimately Elon had too much offensive firepower and held on for the win.

Durjan registered 12 points while Vogt added 10 points of her own. Despite those scoring efforts, Elon won 84-61.

“We’ve improved, but we haven’t been as consistent,” Richardson said. “I’m hoping with [the Charleston] game we’ve turned a corner with that.”

Towson will have a chance for redemption when they host Elon at SECU Arena Jan. 28. Tipoff is set for 2 p.m.