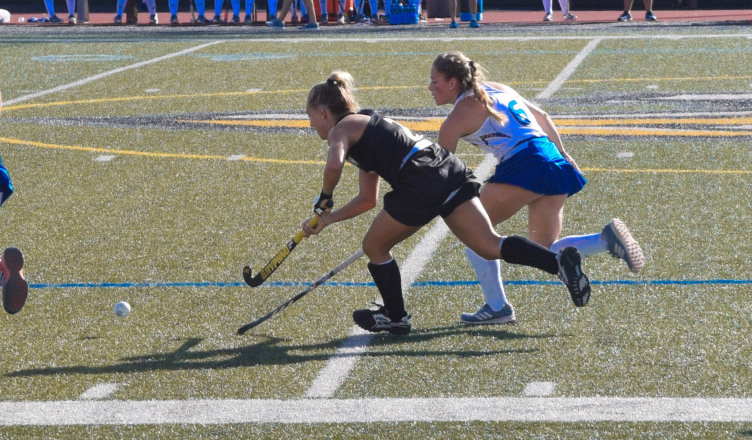 Senior midfielder June Curry-Lindahl scored 5:46 into the game for the Huskies (3-8, 1-1 CAA). Senior midfielder/defender Rachel Campbell scored 3:22 later in the first half for Northeastern.

“Northeastern was a super skilled team,” said Head Coach E.A. Jackson. “They were really physical, and we knew going in that it was going to be a tough challenge.”

June Curry-Lindahl scored her second goal of the game 4:07 into the second half for Northeastern.

Senior midfielder Katie McNeel scored a penalty corner goal for Towson (1-9, 0-2 CAA) 7:22 into the second half and it was assisted by sophomore attacker/midfielder Beira Ho.

“Katie is a consistent force in the attacking circle,” Jackson said. “She has a rocket of a shot on goal.”

Freshman defender Gretchen Alderfer scored a goal with 1:28 remaining in the game for Towson.

“Gretchen’s goal was unexpected,” Jackson said. “I love to see our freshman step up and play like 4th year seniors.”

“We need to do a better job of taking care of the ball and not passing it away,” Jackson said.

The Tigers lost their CAA opener on Friday at Johnny Unitas Stadium against the Hofstra Pride 3-1.

“We knew going in that the only time they score is really on corners,” Head Coach E.A. Jackson said. “She’s a pretty effective goal scorer and so our game plan was to try to keep the ball out and not let them even have an opportunity to score on corners.”

Sophomore attacker Kendra Sykes scored for the Tigers 9:40 remaining in the first half.

“Kenny is just scrappy.” Jackson said. “I loved seeing Kenny finish on that shot because she loves that post.”

Forward Madison Sauve scored for the Pride with 2:49 remaining in the first half.

Towson took three shots on net and they all were in the first half. Hofstra took six shots on net.

“I think our youth sort of shined through in the second half,” Jackson said. “We were really confident after the first half and played really well and I think we went in and maybe thought we had already won the game.”

Senior midfielder Katie McNeel and freshman midfielder Kerri Thornton each had one shot for the Tigers.