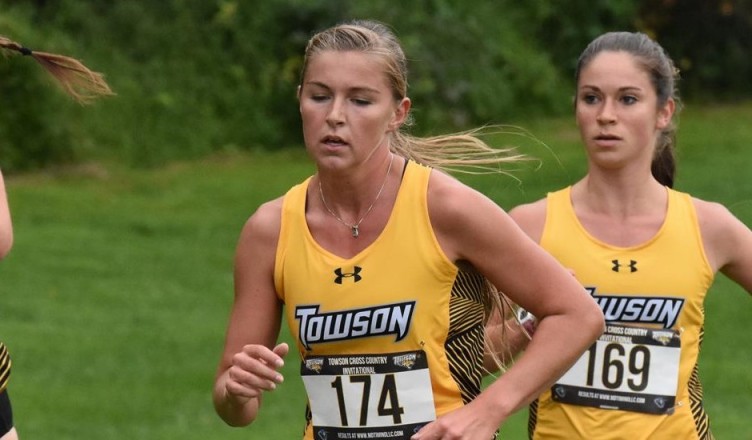 Towson finished sixth out of eight teams with 140 points at the Monmouth Invitational Saturday at Holmdel Park in West Long Branch, New Jersey.

Marist won the event with 34 points, while Quinnipiac placed second with 44 points. Manhattan, Siena and Monmouth all finished before Towson.

Sophomore Erica Israel crossed the finish line at 19:04.41 to earn her third-best time in a 5k run. She placed 13th amongst the other runners.

“I thought overall it was a solid performance again for our team,” Head Coach Mike Jackson said. “We were probably 20 to 30 points from being fourth which is pretty close in cross country, so if we can close up those gaps I think we’ll be even more successful. I’m just looking forward to that next opportunity, but I thought the meet was solid especially from an individual standpoint with Erica Israel.”

Israel was the first Towson athlete to cross the finish line for the third week in a row. She has ranked in the top-15 for every competition this season.

“She is also a sprinter, so she transitioned to being a distance runner when she got here so it just takes time,” Jackson said. “She’s really just put in the mileage, put in the time, she’s very hardworking and consistent and you know she’s put in the work and the miles over the summer and it shows.”

Senior Emily Johnson set a new personal best, taking the 24th spot with a time of 19:34.92. This is 20 seconds faster than her previous mark set back at the 2016 Towson Invitational.

Junior Abby Gauthier had her third best 5k time at 19:58.76 after placing 35th. Fellow junior Shelbie Bobbie had a personal best 5k career time of 20:01.14, placing a spot behind Gauthier.

“I think they’re excited about what they’ve done, but you know what we’re trying to say as a team is the most important thing is how we compete during championship season and beyond so it’s always good to see that progress is being made,” Jackson said.

Jackson thinks these kinds of performances are crucial to building team chemistry and helping the squad find its identity as well.

“You know we graduated some solid runners last year and just have to figure what type of team we’re going to be and continue to grow and mature as a program,” Jackson said. “There’s a lot of newness to it with our new distance coach, coach [Henry] Phelan, as well as some of our new student athletes on the team so it’s just continue to figure out what our identity is and see how we fare against some of the top teams on the East Coast.”

Towson doesn’t return to competition for another two weeks. When the team returns, they will compete at the Paul Short Invitational hosted by Lehigh University on Saturday, Sep. 29.

“I think they’ll enjoy a week away from competing,” Jackson said. “We’ll get some practice over the weekend and then get ready for a huge meet at Lehigh.”