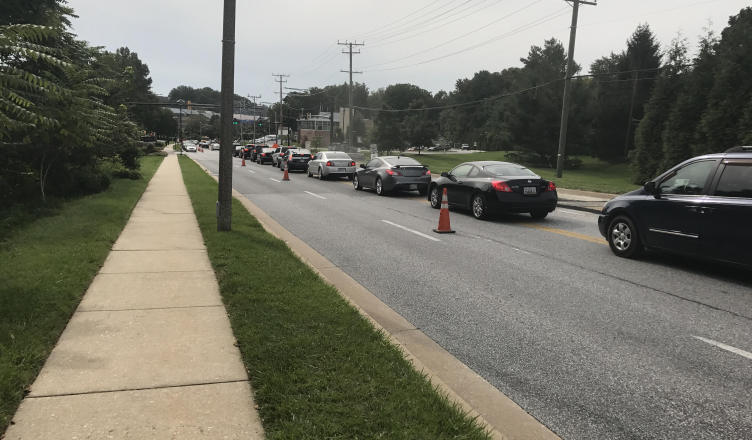 Towson University recently announced that, with help from a $600,000 grant from the State of Maryland, it will be adding bike paths to the perimeter of campus.

The project is slated for completion in  early 2020, and will span a 1.8-mile loop around York Road, Cross Campus Drive, Osler Drive, Towsontown Boulevard and Burke Avenue.

“This project is in conjunction with Baltimore County’s plan to add more bike lane options to the community,” said Patty Watson, the Assistant Director of Sustainability in the Office of Sustainability.  “Also, this project is partnered with Towson University’s Department of Parking and Transportation Services, because of the Bike Share Program that is run through them.”

Towson’s bike share program incorporated orange bikes on campus that students can unlock and use through the SPIN application. Bikes can be rented out by students and faculty for as low as 50 cents per 30-minute ride.

“The Bike Share Program was originally a pilot test program, but it caught on and expanded,” Watson said. “These programs are also to increase healthy exercise programs.”

According to Watson, there were many reasons that the university wanted to implement the project, including having improved transportation efforts for students.

“It gives transportation for students and the community with low emissions rate,” Watson said.

Freshman and computer science major  Chukuwemeka Opara expressed support for the project, including its environmental impact.

According to Sean Welsh, Director of Media Relations and News, the areas for the bike paths are chosen because they immediately surround the campus.

“Bike lanes are going to be added to the existing areas to loop around,” Welsh said. “Also, it connects back to the community.”

Watson added that current bike paths in the Baltimore County area were looked at and analyzed to determine where they should go.

“From there they decided to expand the areas selected, which included the border areas of Towson University,” said Watson.

Watson said the funding for the project came from the Maryland Bikeways Grant Awards. The grant is awarded through the Maryland Department of Transportation, and was part of more than $17 million in pedestrian and bicycle funds granted by the Hogan administration.

“The grant was given for Construction and Design which is to be done by 2020,” Watson said. “The work itself and the time that it will take have yet to be decided. Let alone how the process will go in terms of how it will be done.”

Welsh is hopeful for an early completion date.

“The timeline is going to be early 2020 in February for the project to be done,” Welsh said.