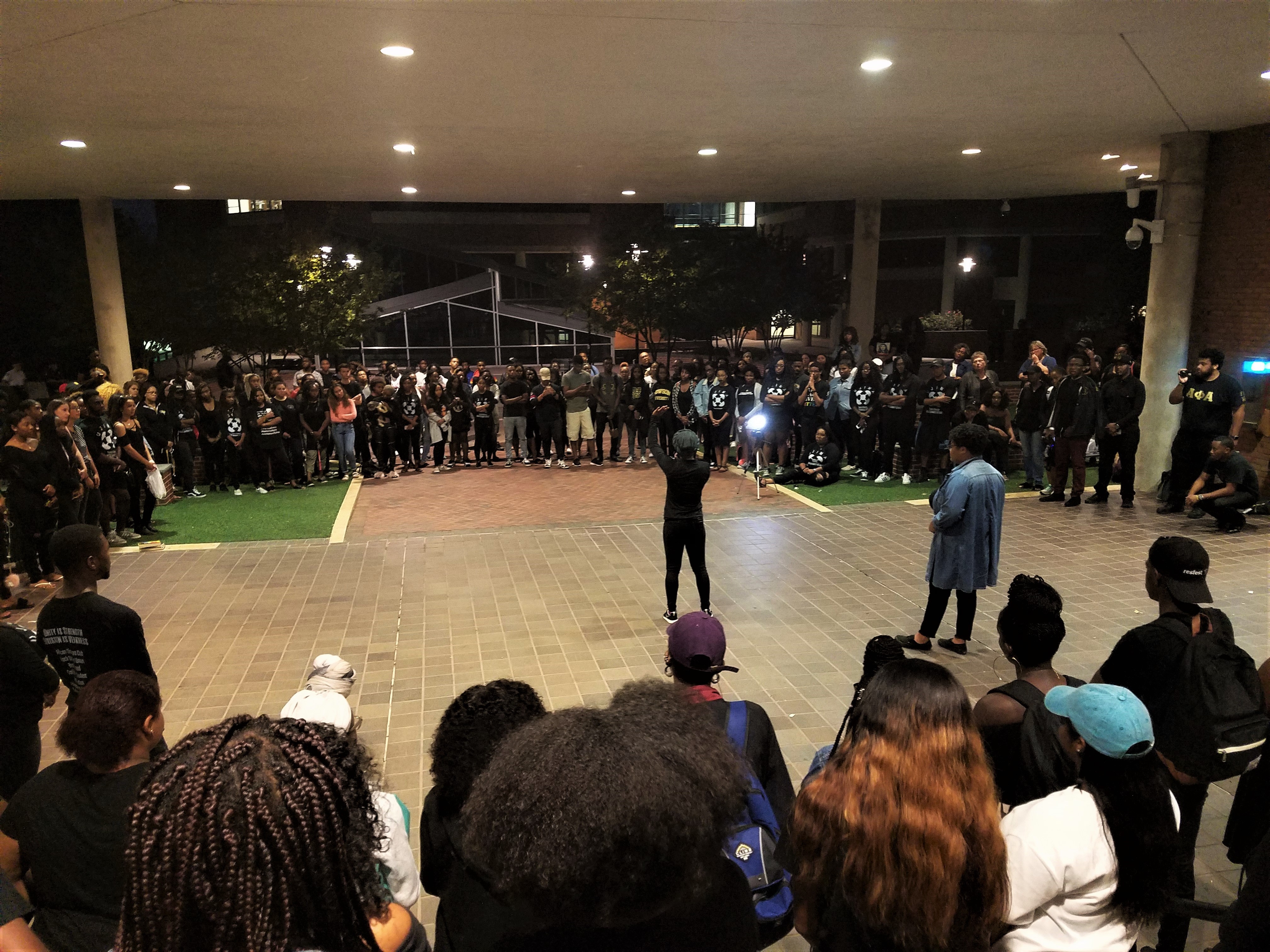 Students discussed what it means to be black in America and at Towson University, and how to heal from racial injustice at the third annual #BlackOutTowson event Wednesday evening.

As night fell over Freedom Square, students and other TU community members donned black clothing and joined together in a solidarity circle.

The attendees held a 30-second moment of silence for people who have died or been injured at the hands of prejudice in the past year. Members of the circle then took turns sharing their experiences and challenges as black students at a predominantly white institution (PWI).

Assistant Director of Student Activities Brandy Hall stressed that the fight for social justice “is not something that can be done alone,” and that communities must carry that burden together.

“Here we are. All different identities, all different backgrounds, all different walks of life,” Hall said. “Do not take this moment for granted. Because coming together is the beginning. The actual work is the progress. The success is your legacy. And if you don’t have the time and the effort to do the work, all we’re going to be doing is keep coming together and I think some of us are really tired of that.”

She emphasized that there are faculty and staff at Towson “who will ride it out with you all” and make students mental health and physical safety their top priority.

Hall, who is also a TU alumna and former SGA president, said being elected as Towson’s first black female SGA president was, “exciting but also scary.”

“In my mind, I’m thinking, ‘why would it take until 2012 for a black woman to grace this position?’” she said.

Hall noted that the same year she was elected SGA president, the unaffiliated “White Student Union” unsuccessfully attempted to start at Towson, which she saw as a threat to students of color and other marginalized individuals. The group, which was never formally recognized by the University’s SGA, was later disbanded.

BSU Vice President and SGA Director of Diversity and Inclusion Russhell Ford said she experienced two hate/bias incidents during her freshman year, but that she met her best friend in her residence hall, and that friend helped her overcome those experiences.

“Those hate/bias incidents, we conquered together…. She was there for me and I was there for her because it was happening to both of us,” Ford said. “And we just felt like together we could just conquer the world. We were two freshmen and we didn’t know how to navigate campus. We didn’t know who was who, what was what, but she was there.”

Ford emphasized the importance of having someone to rely on and wants to be that person for other marginalized students.

Students also shared what they want to see at Towson, including better mental health care and more faculty of color.

The solidarity circle ended with the attendees singing James Weldon Johnson’s “Lift Every Voice and Sing,” often referred to as the “Black National Anthem.” Students closed out the night with music and dancing.

Sophomore Diamond Harris said she came to #BlackOutTowson “to gather with people that are like me to talk about stuff that’s going on.”

“I feel it was a good event for everybody to express their feelings and support one another,” Harris said.

Harris, a biology major, said she hopes to see “a lot less segregation” at Towson.

“It always is a group of black people or a group of white people,” she said. “It’s not really a lot of mixing that much on this campus.”

#BlackOutTowson was started in August 2015 by then-president of Towson’s chapter of Alpha Phi Alpha Fraternity Inc. Brandon Edwards. Since then, several black student organizations have continued the event.

This year’s event was meant to unite students through the supportive space created by the previous two years’ gatherings, according to BSU President Joshua White.

“This year, it’s more of continuing that unity, spreading it to more persons of color, and saying we’re here as a Towson community for all people of color and we can uplift, we can support one another as a community,” White said.

White, a senior mass communication major, said that he hopes that underclassmen will continue to pursue some of the ongoing issues like increasing the presence of faculty of color, reporting hate/bias incidents, cultural competency education, and improving accessibility after upperclassmen graduate.

“All these issues that are ongoing issues will never truly be finished but can always be worked upon, can always be better,” White said. “We just want to push those agendas and have fun.”

“Ever since Trump got elected and the whole dynamic in America became more blatant with systematic racism, [it’s important] just to make sure hate/bias reporting is at the forefront and administration has our backs when it comes to issues that may affect our campus in the future, just make sure administration will be on our side when things go wrong,” Hamilton said.

While students continue to address issues of injustice, White said it is also important to “really have fun as students for once instead of always pushing for institutional change, to have a healthy balance of both,” and that #BlackOutTowson helps maintain that balance.

Hamilton sees #BlackOutTowson as the perfect event to kick off the semester and help students build community going forward.

“Coming to an event like this would just be a good way to start off great, de-stress, send good vibes to everyone, make sure the school year runs smoothly for all of us,” he said.

Editors note: This article was updated to further clarify that the White Student Union was never sanctioned or approved by the SGA. 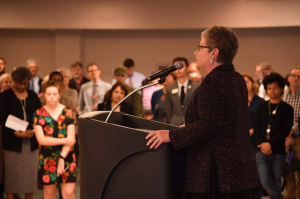