(Apologies for anyone looking for  The Climate Corner. Regular programming will resume next week.)

It’s been awhile since my byline has appeared under this banner. Normally, I like to focus on state-level elections in this column…but with the announcement on Sunday that Hillary Rodham Clinton is officially running for president (surprising nobody), I felt like I had to write something.

I am not quite ready for HRC to be the next president of the United States. I am not ready for her to breeze through a Democratic primary and then undergo a coronation on Election Day.

Yes, she is supremely qualified. I cannot think of that many people in the country’s politics that are as qualified or more so than her. She was a good senator and an excellent secretary of state.

Qualification, however, does not necessarily mean the best for the job – or that a job (especially the job of commander-in-chief) should be handed over without scrutiny.

Don’t get me wrong. If Clinton wins the Democratic primary, she’d crush the national election. It’d take a major scandal to bring her chances down. She’s got good favorability numbers, and it’d feel nice for a Democrat to have such a major victory nationwide.

Besides. There isn’t a single Republican who’s being taken seriously as a contender that I’d consider voting for. Republican primaries and the Tea Party have dragged the GOP way too far to the right.

Will I cast my first presidential vote for Hillary Clinton if she wins the primary? Almost definitely.

I’m not ready to say that Hillary will win the primary, however. I want the race to be vibrant. I want it to be difficult. I want some real progressive voices to be heard. I want and our country needs a competition.

I want HRC to have to give a firm answer on where she stands on the Keystone XL pipeline. I want her to have to defend her actions to expand fracking globally (or, better yet, I want to hear her apologize for it and admit that we have to do more for green energy).

Yes. It would be incredible to finally have a woman serve as president of the United States. Yes, Hillary Clinton has done a lot for women’s rights around the globe. She’s an inspiring figure. I’m not denying that.

Clinton has a storied past that she should have to detail and explain. I wouldn’t feel comfortable voting for her unless she’s got to fight her way through the primary.

I want her to be challenged by Martin O’Malley and Joe Biden. I want Elizabeth Warren and Bernie Sanders challenging her from the left.

If the 2016 general election is going to be yet another Clinton v. Bush adventure, I want both sides to have been thoroughly vetted.

One thought on “Editorial: Not quite ready for Hillary” 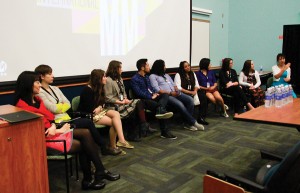