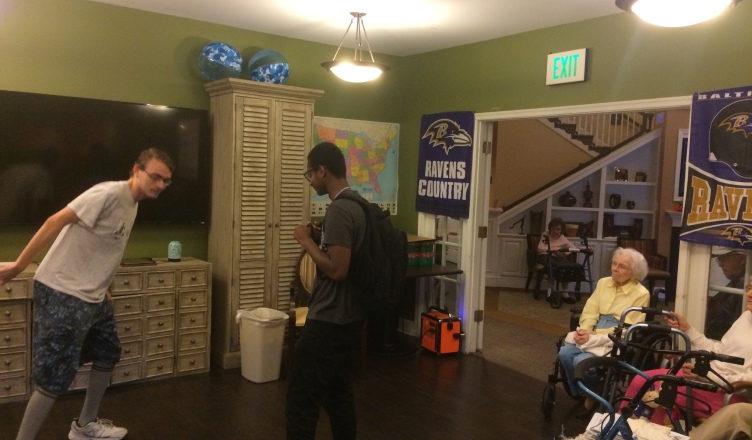 While Towson’s improv club ImprompTU is a relatively new group on campus, they’re already working to positively impact campus, and the Towson community at large, through the power of comedy.

As of this semester, the group has been volunteering at The Maples of Towson, an assisted living center off York Road, on a weekly basis.

ImprompTU’s president, senior English major Sam Brunner, considers the volunteer work to benefit both the improv team members and the residents at Maples–many of whom are in their 80s and 90s and are able to perform in spite of suffering from dementia.

“What’s really cool is because Maples is so close, it’s a convenient place for us to volunteer our time and it’s also great practice for us,” Brunner said. “And it’s also just very interesting to do improv games with residents who suffer from Alzheimer’s disease—the nice thing about improv is you make it up on the spot, so it’s not like they need to memorize lines or do any heavy role-playing.”

Brunner initially helped found ImprompTU back during the fall semester of 2015, and while she says the first few years were difficult in terms of recruiting new members, students are becoming more open to the ad hoc form of comedy.

“Oftentimes you’re funnier than you think you are,” she said. “You just have to let it manifest naturally.”

ImprompTU member and junior English major Courtney Sloan added that the “yes, and…” technique of improv–always agreeing and building off of your partner–makes performing less scary.

“A lot of the time, when I tell people they should come to improv club, they’re like, really intimidated because they think that thinking something up on the spot is so terrifying,” Sloane said. “But improv is really one of the greatest places to start, because no matter what you say, someone is going to say ‘yes, and…’ You’re not going to get shot down, so it’s a great place to start exploring that kind of territory.”

As for topics and themes that end up recurring in the group’s routines, everyone agreed that shoes tend to come up again and again–“Because they’re right there,” Brunner said, “You’re looking around in the heat of the moment for something, and oh, shoes”–in addition socially relevant topics like privilege.

“It comes up somehow, it always will, even if it’s just for one split-second,” said freshman pre-EMF major Marissa Davies.

While Brunner is graduating in May, she’s proud of the mark she’s left on Towson through ImprompTU. While the group will surely miss what Sloane calls Brunner’s “infamous Trump impressions,” she’s helped build the comedy team to what it is today, since its conception in 2015.

“It’s nice that we have established partnerships with the Baltimore Improv Group and Maples, so we’ve gone outside of campus, which was my number one goal for this organization,” Brunner said.

They’re also currently working on bringing Baltimore Improv Group to campus in the spring semester, as well as literal impromptu performances in Freedom Square when it gets warmer outside.

Anyone who’s interested in joining ImprompTU is welcome to meetings in room 5310 of the CLA, on Wednesdays from 6 – 8, and is encouraged not to feel shy or awkward about practicing improv.

“So much of it is literally just showing up,” Sloane said. “You be here, and you are present when you’re here, and that’s how you learn.”