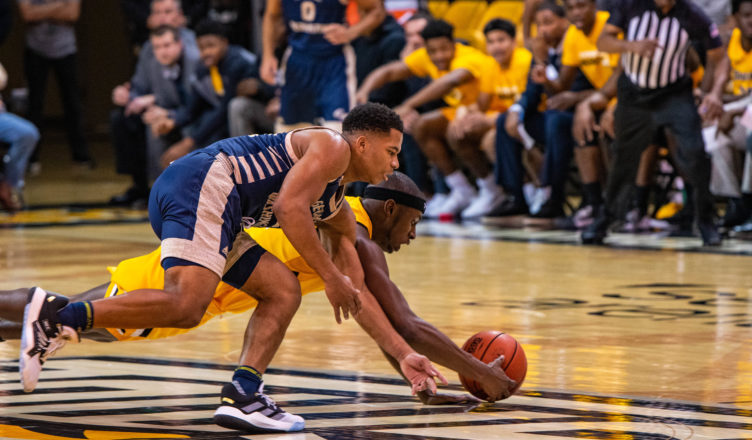 The Tigers ended a three-game losing streak, defeating UNCW 67-60. Towson (7-9, 1-3 CAA) surrendered 21 points in the first half, which is the lowest number of points this season to a Division One opponent. Senior guard Brian Fobbs and sophomore guard Allen Betrand each scored 16 points with Fobbs collecting five rebounds and Betrand finishing with two steals.

“We were excited to get out there in the two best road environments in the league,” head coach Pat Skerry said. “I liked our team a lot, I think we have got a good club and the guys know we have a good club.”

In the final minute, redshirt senior forward Nakye Sanders hit a jumper to take a three-point lead which the Tigers kept the remainder of the game. Four free throws from Betrand ensured Towson’s victory capping off a 90% second half from the line. This was a significant improvement from the 42% free throws made in the first half.

“We didn’t shoot [free throws] well in the first half, but we shot pretty well for the season,” Skerry said. “I think we got good foul shooters, going 4-4 in the last 40 seconds is hard to do.”

Towson did not lead by more than three points for the next six minutes until Fobbs and Betrand each hit a three pointer. With three minutes remaining, a Sanders layup increased the Tigers lead to six points.

“I think we got some good shooters,” Skerry said. “It’s a matter of finishing and I think we’ll get there. Our effort is going to put us in those positions to win.”

Despite leading by six at halftime, Towson committed eight turnovers and shot under 50% from the foul line. The Seahawks (5-12, 0-4 CAA) failed to capitalize and only scored four points off turnovers. One key to the first half was the Tigers doubled the Seahawks eight points in the paint with 16.

Towson led by six midway through, but three UNCW shots from deep cut the Tigers lead to three points with under two minutes remaining. Towson increased their lead to six as Fobbs hit a jumper on a fast break taking a 27-21 lead into halftime.

“Our first half defensive numbers have been off the charts all year long,” Skerry said. “I think we’re getting better with communication.”

In the first half, redshirt senior forward Dennis Tunstall blocked his 97th career shot. He is tied with Greg McClinton for the ninth most blocked shots in Tigers history. Towson finished with three more blocks including two from sophomore guard Jakigh Dottin. He recorded his first career block midway through the first half.

In the second half, the Tigers took a 41-40 lead with two Fobbs free throws less than five minutes into the half. For the next 11 minutes of game time, Towson kept it competitive and trailed by no fewer than five points. However, a 10-2 run including two from three-point range extended the Cougars (10-6, 4-0 CAA) lead to 71-59. Charleston made 10 free throws in the final two minutes to secure a victory.

Cougars senior guard Grant Riller scored 24 points in the second half and finished with 28 points.

“Riller is an NBA guard,” Skerry said. “He sunk two big threes, he made a very tough shot as the shot clock expired that gave them the space they needed. We forced him to make guarded shots and he made guarded shots.”

The Tigers cut the deficit to 25-22 with a Betrand three pointer, but a jump shot and three free throws late in the half expanded the Charleston lead to 35-29 at halftime.

“We didn’t make a lot of adjustments, we hit a lot of quick hitters to get the ball out of our hands,” Skerry said. “We made great individual plays which we need to win tight games. Another thing that helped was offensive rebounds, an outstanding performance on the backboards.”

Neither team shot well, but Towson struggled from deep especially in the first half. The Tigers were held to shooting less than 10% from the arc making one of 12 shots. Towson was held to under 40% from the field in both halves. The Cougars hit 48% of their shots in the second half improving their shooting percentage by more than 10% before halftime.

The Tigers return home to SECU Arena for a three-game homestand. Their first game against Drexel will be nationally-televised on CBS Sports Network on Thursday, Jan. 9 at 6 p.m.

“We certainly hope we have a great crowd,” Skerry said. “It’s always great to have national TV on campus. We’re on seven times which might be [the] most in the history of the program. We get to show off the great university we know we have, and it will be another hard fought CAA battle.”