Where did winning the Presidents’ Trophy take Tampa Bay this year? It took them to being swept by Columbus in the first round of the Stanley Cup Playoffs. The Lightning hit the golf course much earlier than they anticipated. Tampa Bay was the clear-cut favorite to win it all this season, but the Blue Jackets ripped their hearts out.

Columbus trailed Game 1, 3-0 after one period and it looked as if the Lightning were going to stomp on them, but the opposite happened as the Blue Jackets came back to win 4-3.

When the Blue Jackets won Game 2, I thought it was very possible for them not to blow a 0-2 series lead this time around in the first-round. Tampa Bay’s star forward Nikita Kucherov was suspended for Game 3 because he committed a boarding penalty late in Game 2.

They also did not have defenseman Victor Hedman for Games 3 and 4 because of an injury and it didn’t help their blueline at all.

It is going to be a very long offseason for this franchise. This roster didn’t seem to have many flaws during the regular season and all of a sudden, they showed flaws in the postseason? Did the pressure of having the best regular season record get to them?

I don’t think anyone saw this sweep coming. A lot of people thought the Tampa Bay Lightning were going to sweep Columbus, but it obviously didn’t happen.

Does Tampa Bay need to make some tweaks to the roster in order to be better built for the postseason? I don’t think they will make many moves in the offseason, but it wouldn’t be surprising if they did. 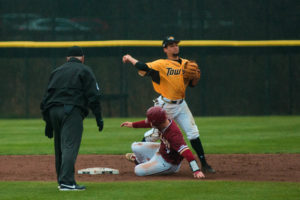