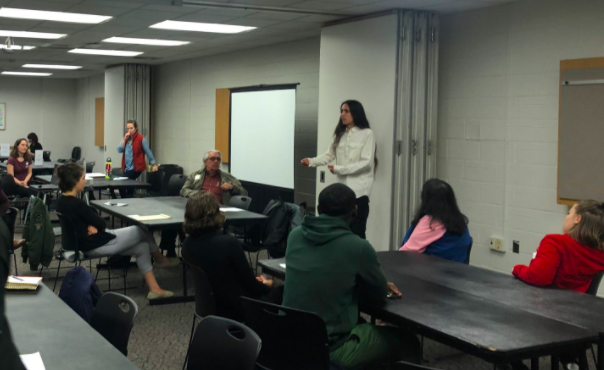 Photo courtesy of The Office of Civic Engagement and Social Responsibility

At just 17 years old, hip-hop artist and indigenous environmental activist Xiuhtezcatl Martinez wants everyone to play a part in protecting the earth.

Assistant Director for Civic Engagement Luis Sierra explained the significance behind Martinez’s work and why he was the optimal choice for this event.

“Xiuhtezcatl is the embodiment of the theme of the conference, of developing leaders, inspiring action and building a greener future,” Sierra said.

As Martinez pursued activism, he learned more about the people being impacted by environmental issues.

“After natural disasters were hitting my home, I did a lot of work and outreach,” Martinez said. “I went on to educating and talking about these issues, speaking at colleges and speaking at the United Nations. What I began to see more and more of is the actual faces of people being affected by this crisis.”

Martinez was also invited to represent civil society and address the general assembly of the United Nations, which encouraged more research on the impact of environmental issues on humans.

Martinez advised audience members at Towson to be more cognizant of the effect they have on others.

“Overall, I think the biggest thing is to recognize the power of your actions,” he said. “Be aware of how you live your life. You have to take the responsibility as a human to recognize ‘my actions affect the world around me.”

Martinez also highlighted his journey in music, even dropping a verse in the middle of his speech.

Martinez addressed the lawsuit that he and 20 other young activists are leading against on the federal government, in which they claim the government has failed citizens’ constitutional rights to a stable climate and future.

“In December, the Trump administration took over the lawsuit and filed a legal precedent to get this lawsuit dismissed,” Martinez said. “We went to court again in December, and we heard two weeks ago that we were actually going to trial this summer.”

Freshman Mikayla McCall noted the importance of Martinez’s testimonies for raising awareness about the issue of environmental protection.

“I feel like the importance of an event like this is that it’s bringing awareness to issues on our globe that many college students are unaware of, or are uneducated in,” McCall said.

“I think it’s really important, especially because a lot of people aren’t really aware of these issues, and this will actually bring their attention to these problems,” DeLosh said.

Sierra said he hopes attendees will be inspired by Martinez’s speech to find ways to make their own positive mark on the world.

“It was an amazing and a powerful way to start this conference,” Sierra said. “I hope that anybody in this room can embody his theme. Everybody has a role to play into making this world a better place.”