Entering Saturday afternoon’s key matchup at Delaware Stadium in Newark, Delaware, the No. 14 Tigers faced the No. 20 Delaware Blue Hens, a team that had not only been rolling on a four-game winning streak, but was also undefeated in conference play.

After a disappointing performance in its loss to UMass last week, Towson (8-4, 3-1 CAA) faced the hottest team in the conference. The Tigers stepped up to that challenge in a 14-12 win.

“We were very balanced on the offensive end, which we need to continue to be between the attack and midfield,” said Head Coach Shawn Nadelen. “I couldn’t have been prouder of those guys to do that and really earn us a tough win up here in Delaware.”

The first quarter was encouraging as redshirt sophomore attack man Luke Fromert and senior attacker Brendan Sunday each responded to Blue Hen tallies to level the score at two within the game’s first 10 minutes.

The last three minutes of the first quarter, however, was concerning for the Tigers as Delaware (10-3, 3-1 CAA) scored three straight goals to take a 5-2 lead.

“We just needed to settle in,” Nadelen said. “I thought we were playing a little out of sorts with out focus, not really clean lacrosse.”

Senior midfielder Grant Maloof’s strike helped kickstart a 4-0 run in just over a minute, including three goals on the man advantage. Maloof had a season-best five goals on the afternoon in a performance that couldn’t have come at a better time for the Tigers.

Right by Maloof on the wing was senior midfielder Timmy Monahan who chipped in two goals and two assists.

“Grant [Maloof] and Timmy Monahan were kinda non-existent in the previous two games,” Nadelen said. “They’re competitive guys and they understand that when they’re on the field, they gotta do their part.”

The Tigers went into the half with an 8-7 lead, limiting the Blue Hens to two goals in the second quarter. Towson was able to ride its second quarter momentum into the third quarter as well.

Maloof’s three third quarter goals, along with two other goals from Sunday and junior attack Brody McLean capped off a 7-0 scoring run which stretched from the second quarter and held Delaware scoreless for more than 17 minutes.

The Blue Hens were able to rattle together a scoring streak of their own, scoring four goals in a little more than ten minutes.

Monahan’s goal from Sunday at the 5:57 mark of the fourth quarter helped to stop the Delaware run. The Blue Hens added another goal but it was too little, too late.

“We need to continue to keep playing better,” Nadelen said. “At this point in the season, that’s gotta be evident every day on the field and the games become that much more important.”

Next, the Tigers travel to Philadelphia on Saturday, April 27 to take on the Drexel Dragons at noon at Vidas Field in their final game of the regular season. 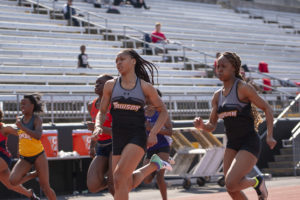