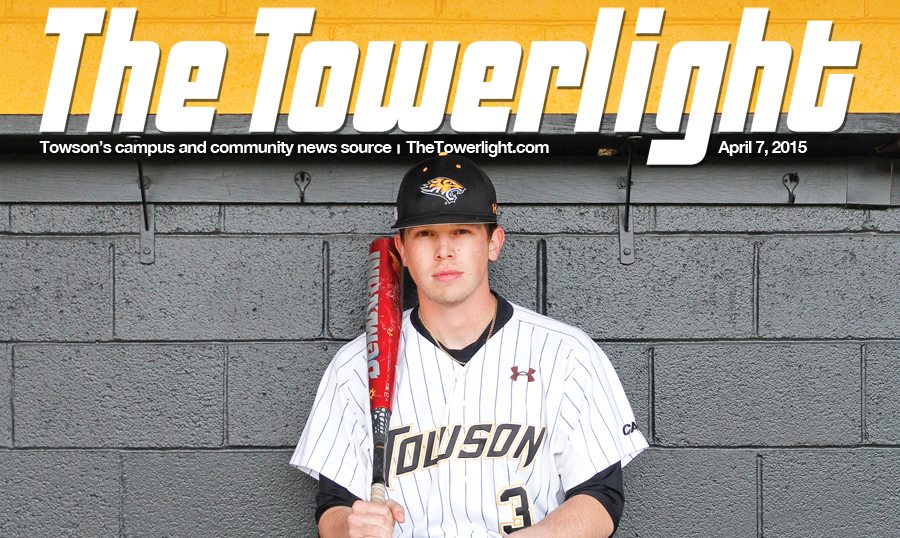 Towson shortstop Peter Bowles stands at the fringe of the infield dirt, slowly creeping closer to home plate as junior pitcher Austin Clark begins his wind up. With the bases loaded and no outs, Bowles crouches into his ready position and Clark fires toward the plate.

The batter makes contact and the ball trickles toward Bowles at short.

He runs toward the ball, scoops it and flips it to sophomore second baseman Colin Dyer in an attempt to turn to the double play.
Bowles’ instincts were correct, choosing within seconds to catch the baserunner at second base, the only sure out. It’s a textbook play for a seasoned shortstop, but Bowles is in his first full season at the position.

Shortstop is just one of five positions that Bowles has played for the Tigers in his four years with the team.

He’s also been a second baseman, first baseman, left fielder and right fielder at some point in his career.

“Without really giving it a tremendous amount of thought, he’s probably played more positions than anyone I’ve ever had here,”
Head Coach Mike Gottlieb said. “Moving to shortstop can be extremely difficult. We saw him doing practice games and thought he might be able to do it. It’s worked out OK.”

Bowles said the constant changing of positions is something that makes his job more difficult, but he’s not afraid of the challenge.

“It’s kind of stressful at times, because it’s hard to get that many reps at each position throughout the week of practice,” he said. “If they decide that you’re going to play first [base] that week, it’s like ‘Well, got to get up before the game and get a lot of reps in. Get the feel back.’ If I was playing I was excited. I don’t mind.”

Bowles began switching positons as young as five years old, after he graduated from his tee-ball days.

Bowles’ parents put Peter on his brother’s baseball team so that they didn’t have to drive to different games each weekend. The only problem was that his brother was three years older than Peter, and that age difference showed on the field.

“Guys were bigger than me, so I just had to find somewhere to play,” Bowles said. “It didn’t matter where I was going to play. … From there, me and my dad would go out to a local field and just work on every position because I had a shot to play somewhere every day, so why not be good at all of them?”

As he got older, Bowles continued be a utility man for his team, traveling across the state for Upper Montgomery Athletic Club.
However, he moved to outfield in high school at Good Counsel and Quince Orchard, where former Towson player Brian McKenna coached. McKenna referred Bowles to Gottlieb in 2010.

“Every time I saw him he swung the bat well,” Gottlieb said. “He was a solid outfielder at the time and Brian had told me he might be able to play infield and even catch.”

In the fall of 2011, Bowles joined Towson for fall baseball and Gottlieb wanted to try him in the infield.

“We were hoping he could play third base,” Gottlieb said. “The experiment didn’t go well, so we put him in the outfield. Not everyone can do it. The funny thing is, we’ve had him behind the plate, first base, second base, shortstop and both corner outfield positions, but for whatever reason, third base didn’t go well.”

Bowles did get the chance to play second base and shortstop for a series early in his freshman year. But he made three errors in the first three games and found himself an outfielder for the better part of the next two years.

“I think I was just nervous,” Bowles said. “I just didn’t get it done.”

From that point, he settled into the outfield, playing 13 games in left field and five games in right. He batted .295 for the season, which made it hard for Gottlieb to keep him out of the lineup.

Bowles spent his sophomore season in 2013 doing the same, starting 45 games in the outfield. That year, Towson shocked the Colonial Athletic Association by winning the conference tournament as a No. 4 seed. That meant Bowles got the chance to play for the first Towson team to make the NCAA tournament since 1991.

“When we won, I was running in for the dogpile at the mound and all the memories went through my head of coming in and feeling lost and all the guys brining me in. It was emotional,” Bowles, who started all three NCAA tournament games, said.

Bowles entered the 2014 season used to playing in the outfield, but that comfort didn’t last long.

Eight games into the season, Gottlieb moved Brendan Butler to third to relieve a struggling Brady Policelli and Bowles took Butler’s first base spot and played 35 games there.

“He was an adequate first base. I had no problem with that,” Gottlieb sad. “Really his best position is left field. At times he’s spectacular out there, but in willing to help the team, he’s had to move from time to time.”

After spending 2014 as a first baseman, Gottlieb asked Bowles over the summer about playing shortstop in 2015. Bowles said he wasn’t interested, but after that, couldn’t stop thinking about shortstop
Fall baseball came along, and sure enough, Bowles found his way into the shortstop position. It was another challenge.

“I knew right away that I wanted to be shortstop,” Bowles said. “When the first practice came along, he had taking reps in outfield and I saw all the guys going out to get the ground balls and I said ‘Oh, I’m hopping in there.’ And it just went from there. I grabbed an infield mitt and went in line.”

“To be honest, if I put him [at catcher], he would do a credible job because we’ve done that before in practice,” Gottlieb said. “If I were in dire straits, he would go behind the plate.”

And of all the positions he’s played at Towson ─ 40 games at first, three games at second, 27 games at short and 64 games in the outfield ─ Bowles’ favorite position is catcher, the one he’s never had the chance to play.