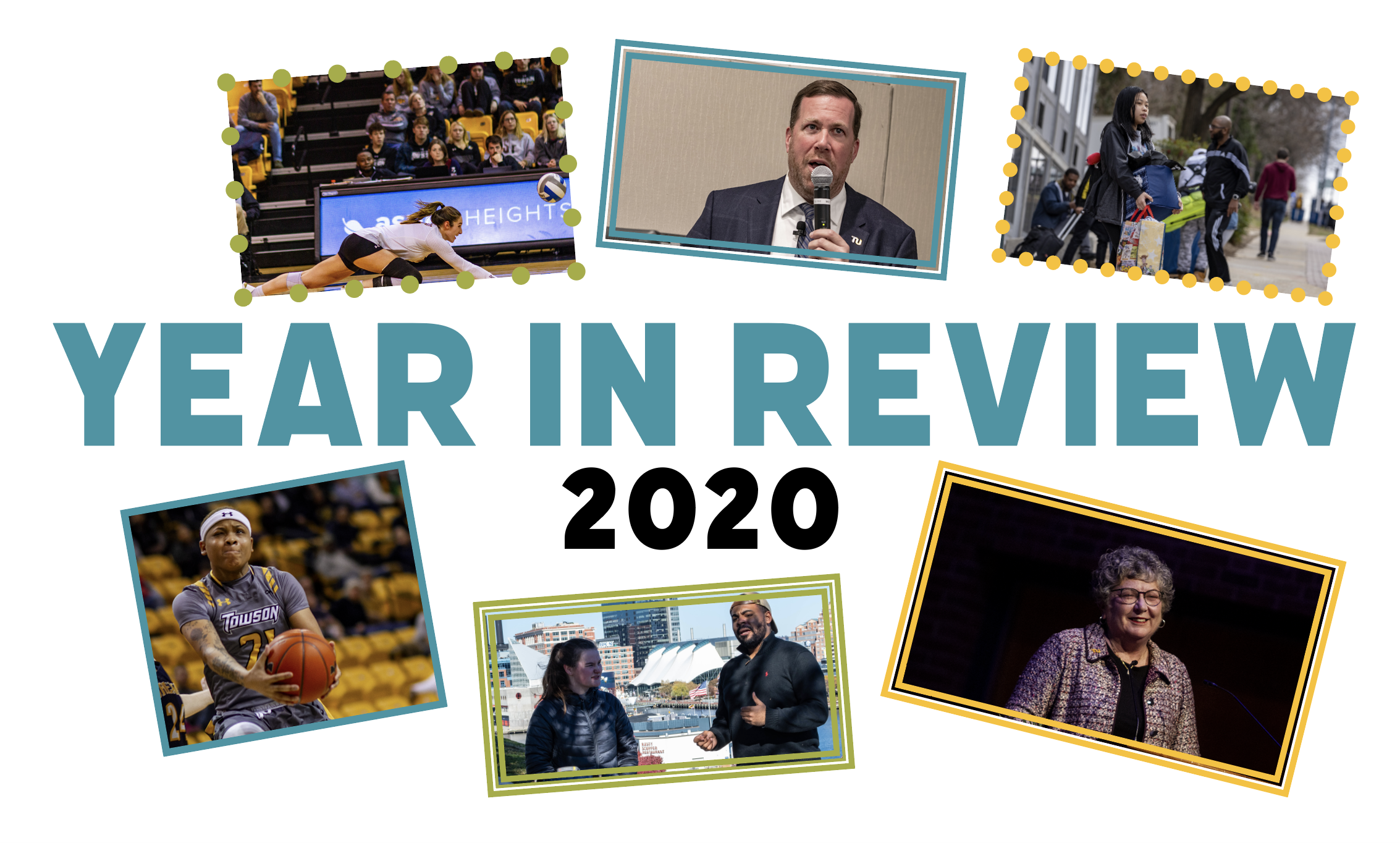 The Towerlight reflects upon the events that occurred in the 2019 – 2020 academic year.

Towson University has shifted to giving students more flexibility in choosing pass/fail grading in light of the transition to online classes for the remainder of the semester following Maryland Governor Larry Hogan’s urge for all universities to switch to an online format. The coronavirus led to many updates and shifts in University life- both academics and student housing. On March 3, Towson University suspended all summer and spring 2020 study abroad programs, which was one of the first responses to the coronavirus outbreak that the University took. Following that announcement, the University held a forum March 4 in which Director of University Health Services Matt Goldstein provided updates on Coronavirus and answered questions. Just a week later, Towson cancelled three days of classes before spring break and rushed students to move out of their on-campus dorms by that Wednesday at noon. Over spring break, students were informed that class would stay online format for the rest of the semester.

On March 12, Towson announced that all of the spring athletic programs would be canceled in response to the Coronavirus (COVID-19) outbreak. The affected sports include baseball, men’s and women’s lacrosse, men’s and women’s golf, outdoor track and field, softball and tennis. This announcement came shortly after the CAA announced that spring sports in the conference would be canceled, as well as the remainder of the women’s basketball tournament. In the days leading up to this announcement, every major sport that was competing had either canceled or postponed their competitions. This included the NBA, NHL, and the NCAA men’s and women’s basketball tournaments among others. The NCAA is currently debating whether these athletes should be granted another year of eligibility.

From the closing of Patuxent, to the revamping of Glen Dining, one of the many side-effects of construction around campus, especially in the University Union, was the replacement of Paws Cafe with the Chipotle-style Tex-mex restaurant, Los Fuegos. The pub-style menu of Paws turned into the burritos and quesadillas of Los Fuegos. Students can now get rice bowls, burritos, and nachos in the wake of burgers, sandwiches and pickles. The hope of this switch was to maximize the space available that was lessened due to construction. In doing so, the average time students spend getting their food and hanging around lessened, as each order averaged two minutes to get out. Many students agreed Paws would be missed, but the change in scenery has gathered many regulars.

For the three leaders on the women’s basketball team, their relationship goes beyond the court. Redshirt junior guard Kionna Jeter, redshirt senior guard Qierra Murray, and senior forward Nukiya Mayo left a lasting mark on the program in their time as Tigers. The Big Three were key contributors in leading Towson to its first CAA championship and NCAA tournament appearance in 2019. This season, they each surpassed the 1,000 career point plateau. What makes this group unique is the bond they have with each other as well as their head coach Diane Richardson. The players refer to coach Richardson as their grandmother because of the love and wisdom she provides. Each of the players also faced some type of adversity in order to reach the point they’re at today. The accomplishments achieved by Towson’s Big Three are sure to be remembered for years to come as they have helped turn the program into a yearly success within the CAA.

Towson University’s CAB announced the headliner for their annual Tigerfest concert, which is part of Tigerfest week, on Feb. 20. Roddy Ricch was set to perform this year at SECU Arena on April 24 at 7 p.m.  However, as a result of the outbreak of COVID-19 and TU’s transition to a distance-learning environment, Tigerfest 2020 has been cancelled. Roddy Ricch is an American rapper, singer, and songwriter who released “Feed Tha Streets II,” in November 2018, which was No. 67 on the Billboard 200 list. He also won a Grammy in 2020 for Best Rap Performance in Nipsey Hussle’s album “Racks in the Middle.” Ricch is also popularly known from his songs that have gone viral on Tik Tok. A lot of students were excited to see him live on stage at TU. Tickets for the floor and lower bowl of SECU Arena sold out within 24 hours.

“An Evening of One Acts: Part 1” was a series of one-act plays which ran from Feb. 26 through 29 in the Ruth Marder Studio Theatre. Each play was directed by a Towson University student. “Three Skeleton Key,” directed by Samuel Pomerantz, is about three lighthouse keepers and their struggle to survive when a ship bearing a strange cargo arrives on their reef. “Three Skeleton Key” is a horror genre audio play which has since been converted to the big stage. “A Marriage Proposal,” a comedic one-act farce directed by Sophia Delogu, is about a man wanting to propose to his neighbor, however their love continues to prove impossible as they cannot stop arguing over neighborly issues such as land and familial tensions. Last but not least is “Who Killed John Doe?” written by TU student Alexandra Harrington and directed by Sydney Pope. It’s a murder/mystery/comedy making fun of classic who-done-it tropes with a lot of puns, and a lot of sex jokes.

In February of the 2020 spring semester, Vernon J. Hurte joined the Towson University team as the new vice president of student affairs. Hurte replaced former vice president of student affairs, Deb Moriarty, who was in the role for over a decade prior. Towson put together a committee to conduct a dedicated search for the new vice president, and Hurte checked off all the boxes. According to Kelly Hoover, a search team member and Towson’s assistant vice president for students affairs, Hurte was strategic and had the ability to learn and grow from experiences. Hurte has more than 18 years of experience in higher education.

The Tigers concluded their historic season with a loss to Penn State University in the NCAA tournament. Despite the defeat, the 2019 season was nothing short of a memorable one. Towson went undefeated in CAA play and rode a 23-game winning streak into the NCAA Tournament. The Tigers advanced to the second round of the tournament after defeating American University for the program’s first tournament win. Senior outside hitter Olivia Finckel recorded a career best 23 kills in the victory and was one of five seniors who helped turn the program around. Against Penn State, Towson kept the match competitive including seven ties in the final set but was unable to continue their winning ways. For senior setter Marissa Wonders, the matchup with the Nittany Lions was a homecoming for the Pennsylvania native. She remembered attending games at the Rec Center where she would play her final collegiate game.

TU President Kim Schatzel gave her annual presidential address on Nov. 12 this academic year addressing important topics about the future of the University and details on construction updates around campus. Schatzel praised the recognition the university had received as being placed in the top 100 public universities by U.S. News and World Report’s 2020 Guide to Colleges and Universities. Schatzel also gave timely updates on ongoing campus construction including the new science building being on track to open in the fall 2020 semester, and the Dr. Julius Chapman Quad replacing the demolished Stephens Annex. Schatzel also discussed the opening of TU’s first business engagement center as well as the University’s purchasing of a 12-story building on 401 Washington Avenue that will be used for non-academic University functions to free up space on campus. TU’s president also honored the success of faculty and students for their hard work and success over this time.

Student looks to change narrative of Baltimore with film

In November of 2020, Antoine Dupree, a senior communication studies major at Towson University, along with a group of Towson University students and community members and The Spotlight Creative Organization, will be releasing a docuseries to showcase the positive aspects of Baltimore alongside the negative. The name of his production company is Creator Source Studios, which strives to bridge the gap between creativity and media. He has worked with Towson University students in the past on projects such as the YouTube channel Nerd Culture, a film project of his which features fun videos on everything “nerdy.” The team plans to showcase the good, the bad and the ugly of Baltimore through interviews, walk-throughs and narrations with individuals, local businesses, and anyone else willing to contribute to the conversation.

Stephen’s Annex was demolished in November in order to give room for a new university quad. The quad, which was announced during homecoming weekend, will be dedicated to Julius Chapman, Towson University’s first dean of minority affairs and will feature seating and greenery for students. The quad will have tables and chairs that are able to be easily moved around. The demolition follows the staff evacuation of Stephen’s Annex in September where there was a discovery of non-toxic mold in the building. According to Sean Welsh, TU’s associate vice president of communications and media advancement, the evacuation of faculty from their offices came after TU Environmental Health and Safety did proactive air quality checks at the annex.

Almost like a celebrity around campus, TU’s director of photographic services, Kanji Takeno retired from his photography position following the fall 2019 semester. Takeno came to Towson in 1996 after seeing a classified ad in the paper and applying. Ever since then, Takeno became widely known to TU students and staff as he drove around campus in his famous golf cart taking countless pictures of TU’s community. He worked hard to put a smile on everyone’s face as well as deliver top-quality photography to the University. Takeno was born and raised in Kogushi, Japan, a small fishing village, and began learning English when he was young so that he could experience the world. Takeno still works for the university as he maintains his position as a professor teaching Japanese.

In October, TU’s first dean of minority affairs, Julius “Dean” Chapman, was honored with a bronze bust of himself, recognizing his work in creating a foundation of diversity and inclusion of the African American diaspora at TU. Chapman’s bust was funded by the brothers of the Omega Psi Phi Fraternity and stands in front of the Media Center, next to a bench that was also dedicated to Chapman on last year’s Homecoming weekend. At the bust unveiling, President Kim Schatzel announced that a new park quad would replace Stephen’s Annex next to the bust and would be dedicated to Chapman as the Dr. Chapman Quad. Demolition of the annex began in November and the new area will feature seating and greenery for students.

Towson University President Kim Schatzel sent out a campus-wide email addressing concerns of the Towson community regarding sexual assaults on campus. The email and forum Oct. 1 followed the Sept. 22 arrest of a student after allegedly raping another student in Marshall Hall and the incident in the University Union Sept. 29 where a male grabbed a women’s breast. Responses to the incidents as indicated in the email included seven additional positions added to the TUPD and four additional counselors. Another addition included the installation of a blue light security poll in front of the 10 West Burke Avenue residence hall which was a direct response to a student concern addressed at the Oct. 1 forum. The hours for the SafeRide shuttle were also increased. SGA president Naimah Kargo took a stance on behalf of the SGA as a resource for students needing support. “If you feel administration doesn’t care, I do,” said Kargbo. “My door is open and we will make sure that this work gets done.” 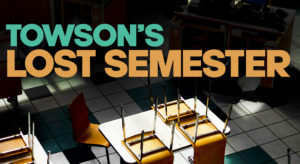