Students participated in a night of laughter Saturday night, after what had been an emotionally tense week for many students.

The campus improv group ImprompTU hosted the Freestyle Funny Comedy Show (FCCs), which featured Chico Bean from Nick Cannon’s “Wild ‘N Out,” who emceed the show. Bean was a part of the comedy show before joining “Wild ‘N Out” and tours with them doing standup comedy across the country.

Students had the option of using Tapingo to have food delivered right to their tables while they watched the show. Mocktails and other beverages were also sold at the “bar” in the back of the room.

Bean was the first of the night to enter the stage, while the Rae Sremmurd song “Black Beatles,” made famous by the Mannequin Challenge, played in the background.

“We’re all already doing the mannequin challenge so I thought the song fit the room,” he said to the very still audience.

He walked around the room and interacted with audience members, making jokes about them as he went. Bean told one audience member that he reminded him of Peter Griffin from “Family Guy,” and the crowd laughed.

Bean was joined by fellow comedy show members Darren Brand, Osama Bin Drankin, Burpie and Fifty. In between their individual standup routines, the comedians played improv games with the audience.

The first, “Two Pics One Word,” was similar to the game Pictionary, where volunteers had to guess a word based on pictures shown to them. However, the comedy show’s version had its’ own twist. One of the first pictures was of a mouse trap and a house, which equaled the word  “traphouse.”

The president of ImprompTU, Sam Brunner, and another member of the improv group joined the comedy show cast for the second game called Sound Effects. During Brunner’s turn, the audience picked a scene and Brunner would make sound effects on the mic.

“I loved when the two of us played that improv game with the sound effects,” Brunner said. “We usually use dialogue and action so it was interesting to just use sound effects.” 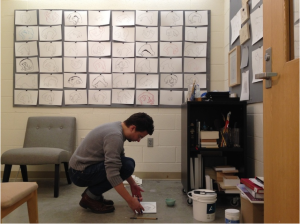