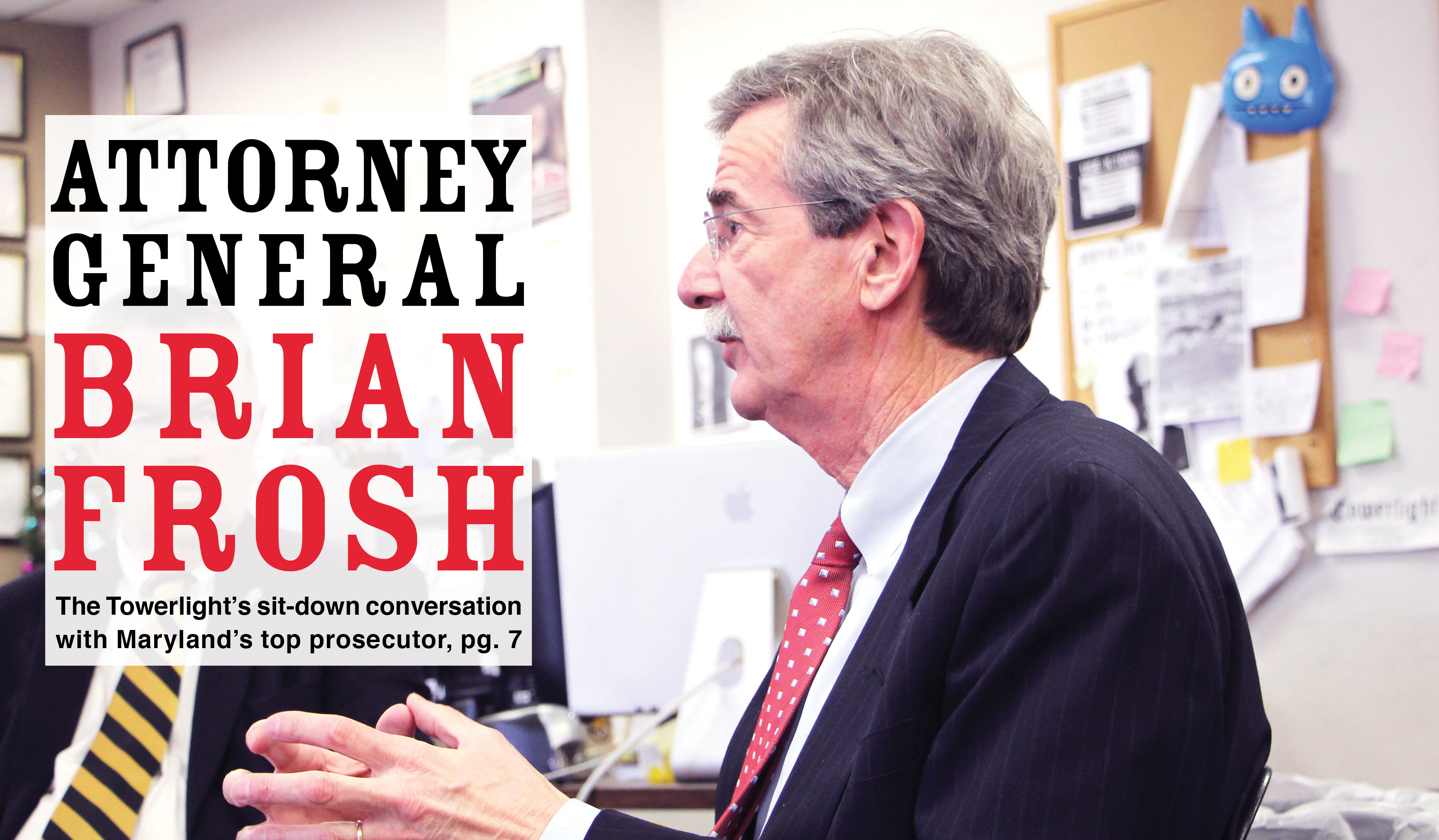 In an interview with The Towerlight, Towson President Kim Schatzel said that Frosh’s visit was more of a “courtesy,” and less to discuss any specific legal issues.

“[They] also wanted to spend time talking to the campus, because ultimately the campus is the client,” Schatzel said.

Below is the transcript of a conversation between Attorney General Brian Frosh and The Towerlight. Some parts have been edited for clarity and brevity.

How’s your day been?

Frosh: Great. Well, it’s been great since I got here. I was in Annapolis before that and that’s always challenging. There’s just a lot going on. The Muslim ban. I have bail reform in Annapolis that I’m working on. I guess I’ll go back to that, see what’s happened in the office.

Well, then, since you’ve been at Towson, how’s your day been?

TU Spokesman: That was about 20 students. Several of whom had issues or concerns related to the executive order and travel ban and documentation in general, and how that might affect them or members of their family.

Frosh: Yeah, one young man — I won’t identify him any further — said, you know, that he’s from another country, is Muslim, his family has invested an enormous amount of money in getting this far through Towson. He’s afraid to go home.

How was your meeting with President Schatzel?

Frosh: We may have shaken hands at some point in the past, but I don’t think we had the chance to sit down and talk.

It was really a question of what we can do. We represent the University and we wanted to know how we could do a better job, how we could work together more efficiently.

The General Assembly recently expanded your role in the State; how do you see that continuing to evolve in the Trump era?

Frosh: We have exercised the authority once. Yesterday, we sued the administration over the Muslim ban. We joined Washington State along with its lawsuit. We filed an amicus brief in support of Hawaii’s effort. The judge in Hawaii crossed the finish line first.

We are considering exercising the authority again, because the automobile manufacturers have sued the United States Environmnetal Protection Agency, saying that the emissions standards are too tough and they’d like some relief on that. And, frankly, with Scott Pruitt as head of the EPA, we’re deeply concerned that the EPA would just say, “OK, we give up.” So Maryland and a number of other states are considering intervening in that lawsuit.

Broadly speaking, do you see the role of attorneys general expanding during the Trump administration?

Frosh: I think that’s a fair statement. The Republican attorneys general afflicted the Obama administration with a series of lawsuits to try to stop the Obama agenda. They met with some success and some of the precedents that they set may come back to bite, because they may be cited by and used by Democrat attorneys general who are trying to defend the Obama legacy.

So if his proposed budget were to come through — if, for example, cleanup for the Chesapeake Bay were just totally slashed — is there some sort of a plan in your office about what could be done to protect that or other programs?

So the plan must be pretty similar for any of those policy areas?

Frosh: Yeah. Until we see what he does, how it’s actually formulated – whether it’s executive action, whether it’s congressional action – we won’t really know just how we can respond.
Honestly, most of the time, if Congress passes a law there won’t be much we can do. If it’s unconstitutional we can take it on, but otherwise, if they say, ‘We’re eliminating the Environmental Protection Agency,’ I’m not sure that the Attorney General of Maryland, or of any state, is going to be able to do much about it. I think the American people will have a lot to say about it in 2018 and 2020.

I’m sure you’ve noticed how concerned students are with some of these issues on this campus, especially issues surrounding immigration status. What if there’s a round three with a travel ban?

Frosh: I think he’s violated the rule of holes. If you’re in a hole, stop digging. Last night, the judge issues his ruling and Trump, in his vitriol, includes the statement that, you know, ‘We watered down the first executive order.’ And, yeah, that’s what the judge found! You just watered down the first executive order, you didn’t alter its purpose, which was to stop Muslims from entering the United States. So for round three, y’know, he’s in a deeper hole and he just keeps it up.

Some people would say, you know, ‘Hey, this is the new administration, this is what people voted for.’ Is there a point where you step back?

Frosh: I don’t think so. If he takes action that’s constitutional, yeah, that’s right, that’s what people voted for. But when he is trampling on the Constitution, when he’s violating the religious freedoms that our country stands for, when he’s denying people due process and equal protection, our office is not going to sit back and I hope that other attorneys general will join with us. I expect they will.

Towson has already announced, for example, that TUPD wouldn’t assist immigration enforcement officers, unless there’s a threat, for example, to security. If that sort of thing started happening in Maryland, is there anything your office could do?

Frosh: If somebody is in custody and the U.S. Department of Homeland Security Immigration and Customs Enforcement requests the local jail to hold them for 48 hours or two weeks or whatever, because ICE wants to deport them, it’s not legal for them to do so unless there is a warrant for that person’s arrest for a felony or there is probable cause to believe that person has committed a felony. That’s advice that we want to make sure every law enforcement agency in the state is aware of. On the other hand, if ICE comes to Towson and does a sweep, there’s not much the attorney general can do in advance and little afterwards. I’ve written to the Department of Homeland Security, and I’ve asked them not to try to use their aggressive deportation strategy at schools, at hospitals and at courthouses. I think it’s counterproductive and destructive.

What do you think the biggest challenge facing your office in the next few years is going to be?

Frosh: The president has made all sorts of either campaign threats or campaign promises, depending on your perspective, that, and I think I said before, will be very damaging to our state if he carries them out. Trying to prevent that kind of harm from happening, I think, will be the biggest challenge.

Is it worth that challenge, though?